It's a unique approach to addressing food waste concerns. 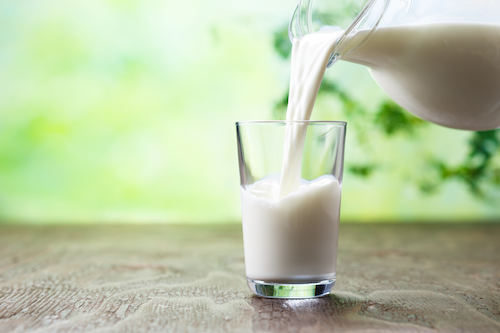 Mi Terro is a Los Angeles-based start-up that thinks it has another possible option for excess and contaminated milk that is disposed of at dairy farms. The Milk Tee is comprised of 15-20 percent “waste” milk that would otherwise be dumped. The company found a Chinese manufacturer who was able to combine the milk with an organic material called micromodal, which is made of beech wood and similar to cotton, in creating the shirts.

The company feels it's offering a solution to food waste in providing a more sustainable product and process. While an intriguing and undeniably green initiative, turning milk into fabric is both time-consuming and a bit expensive. According to a report on Business Insider, it takes about two months to turn milk into t-shirt material. Right now the shirts sell for $59 on the company’s website.

The process starts by retrieving the milk from dairy farms, fermenting it and removing the fat. It’s then de-watered to form a powder that is dissolved in water again to remove unwanted proteins. The end result is a type of yarn that can be woven into a shirt that the company describes as odor-free, breathable, moisture-wicking and three times softer than cotton.

The company has received over $26,000 in Kickstarter funding. Down the road, Mi Terro is considering adding to their milk line with socks, pajamas, scarves and underwear. The company also sells tote bags made from recycled ocean plastics.