While the raids at seven plants were unprecedented, chicken processing facilities are normally plagued by heavy turnover and ravenously seek employees. 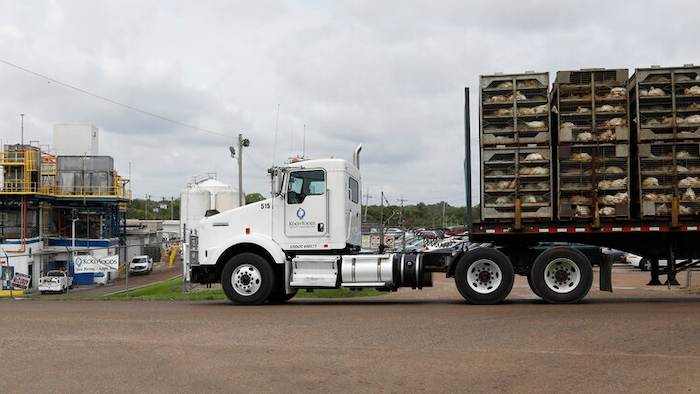 Koch Foods, based near Chicago, held the job fair to recruit new workers at one of its Morton plants, after Immigration and Customs Enforcement agents on Wednesday arrested 243 workers suspected of working without legal authorization.

By 10 a.m., a crowd of dozens was on hand, and steady stream of people came and went. Most were black and spoke with accents from the American South. A few appeared white or Hispanic.

"They are part of normal efforts to employ," Gilliand wrote in an email. "In this environment of relative full employment, most businesses are looking for qualified applicants; Koch is no different."

Eddie Nicholson Jr. of Louisville, among Monday's applicants at a state employment service office in Forest, was more succinct: "They hire anybody."

The 25-year-old has worked in chicken plants before and was considering a return, but wanted to see if wages had gone up. Plants in recent years have typically paid $11 to $12 an hour, according to labor statistics, but Nicholson said he wants $15 an hour.

Like Nicholson, many who applied Monday were chicken plant veterans. They understand the arduous and sometimes dangerous work of slaughtering, butchering and packaging chicken, from hanging up live chickens, to pulling off skin, to cutting with super-sharp knives, to boxing up chicken, much of it done in near-freezing temperatures. The line moves fast and people repeat the same motions over and over.

"It's definitely hard," said Cedric Griffith of Magee, who said he's been working at McDonald's after getting fired from another chicken processor for missing too many days. "You're going to lose of lot of weight. Nine times out of 10, when that week is over, you're tired."

That draining work, at relatively low wages, leads many people to quit. So chicken plants are always hiring. Angela Stuesse, an anthropology professor at the University of North Carolina who spent years among labor organizers in Morton and nearby towns, said the desire for cheap, docile labor led poultry firms to begin recruiting Spanish-speakers in the late 1990s. At first, Stuesse said they were people who could legally work. But they were eventually replaced by Mexicans, Guatemalans and others who often lacked legal working papers. Later, came a wave from Argentina, Uruguay and Peru.

Koch has hundreds of jobs posted for its Morton facilities on a Mississippi state government job board. Only a few dozen other jobs are listed within 10 miles of Morton, many of them at fast food restaurants or dollar stores. The options are a little better in the larger town of Forest, thanks to defense contractor Raytheon and a sawmill. But Tyson, Koch and other chicken plants still dominate the market. Pearl River Foods, a plant raided in the town of Carthage, posted 200 jobs Aug. 1, starting at $7.25 an hour.

Ralphtheia Nichols, a 51-year-old Lake resident, estimated she had worked for various chicken plants maybe 20 times over the decade. She was back Monday to apply again, seeking part-time work.

"This is one of the lowest places for income and they really don't pay," Nichols said of employers in the area.

The Koch plant last year agreed to pay $3.75 million to settle a federal Equal Opportunity Employment Commission lawsuit alleging that managers sexually harassed female employees and discriminated against them because of their race and national origin. Citing a pattern of immigration enforcement actions after companies got into trouble over working conditions, many Democrats and union supporters in recent days have asked whether the raids had something to do with Koch's troubles.

"It's more than just coincidental," said House Homeland Security Committee Chairman Bennie Thompson, a Mississippi Democrat who represents areas including other plants that were raised, but not Koch. He and other House members raised the issue in a Friday letter demanding information about the raids from Attorney General William Barr and Acting Homeland Security Secretary Kevin McAleenan

Gilliland, the Koch spokesman, denied that the raid was related to the EEOC settlement

But whatever triggered the raid, it could have long-term effects on the labor pool. In some places raids have led immigrants to move away. And if they stay, Stuesse said raids tend to keep immigrants terrified of advocating for better wages and working conditions.

"It tells immigrant workers that if they speak up, their worst fears will come true," she said.

Ex-Owner of Raided Plant Gets 18 Mos.