With consumption of milk in the U.S. down 40 percent since 1975, the dairy industry is looking for all the help it can get. 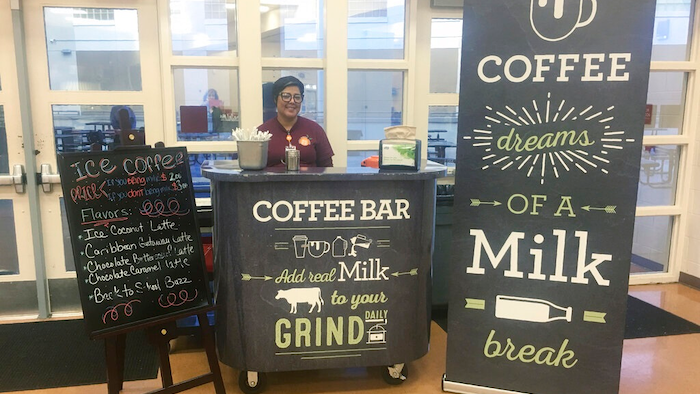 NEW YORK (AP) — Coffee bars selling $3 iced lattes are popping up in high schools, helped along by dairy groups scrambling for new ways to get people to drink milk.

It's one small way the dairy industry is fighting to slow the persistent decline in U.S. milk consumption as eating habits change and rival drinks keep popping up on supermarket shelves.

At a high school in North Dakota, a $5,000 grant from a dairy group helped pay for an espresso machine that makes lattes with about 8 ounces of milk each. The drinks used 530 gallons of milk this year.

"We buy a lot of milk," said Lynelle Johnson, the food service director for the Williston Public School District.

It's not clear how much coffee drinks in high schools might help boost milk consumption, or whether the concept will gain traction across the country. But with consumption of milk in the U.S. down 40 percent since 1975, the dairy industry is looking for all the help it can get.

The industry famous for its "Got Milk" advertising campaign is hoping its newer "Undeniably Dairy" slogan will help fend off the almond, oat and soy alternatives that are becoming more popular. And regional dairy groups are encouraging schools to serve milky drinks like smoothies and hot chocolate, as well as iced lattes.

The efforts come as the dairy industry is also trying to adjust to changing views about diet and nutrition.

With fat no longer seen as a dietary evil, skim milk has suffered the sharpest declines in demand in recent years. And it's difficult for dairy producers to reduce production of skim milk because it is left over after making other products such as butter, cheese and ice cream.

As skim milk becomes especially tough to sell, Organic Valley is even drying some of the surplus and mixing it back into low-fat and fat-free milk to boost the nutrients and make it creamier.

"We're just exploring everything we can," said George Siemon, who was CEO of Organic Valley when the plans were developed, but has recently stepped down.

The dairy industry blames rules that limit the fat content of milk in schools for consumption declines, arguing that generations of students are growing up disliking milk because of the watery taste of skim.

In the meantime, it's hoping lattes can make milk go down easier. In Florida, a dairy group said it paid for coffee carts in 21 high schools this past school year. In the Southwest, a dairy group gave grants to seven schools for coffee programs.

Not all high school coffee bars get grants from dairy groups, and the money may only cover a small portion of costs. School food operators also say lattes offer other benefits, such as giving teens a reason to stay on school grounds. At a national convention for school lunch officials this month, one session will also detail how schools in Orange County, Florida used coffee drinks to get students to buy lunch.

For an extra $2, students can turn the cup of milk served with lunch into a coffee drink at a nearby cart. Without the lunch, it costs $3.

The Orange County schools did not receive industry grants for the coffee bars, but the local dairy council provided chalkboard-style signs and menus.

Cafeteria directors and dairy groups say coffee drinks in schools have to follow nutrition standards, making them healthier than the lattes students would get anyway outside schools.

The U.S. Department of Agriculture, which sets rules for schools participating in its meal programs, says high schools can sell espresso drinks that are no bigger than 12 ounces, and that are made with fat-free or 1% milk. The drinks have around 150 calories, school food directors say.

But not everyone thinks teens should drink coffee, or that they need milk.

As for lattes, Muth said there are ways to encourage students to get the nutrients of milk without promoting caffeine habits that could lead to headaches, agitation and lack of sleep.

"If they're going to be having that outside of school, that's one thing. But in schools, the idea is to promote good health and nutrition," Muth said.

Exactly how schools prepare coffee drinks can vary, but milk is a primary ingredient for lattes. "It's really milk with some coffee, as far as proportion," said Julie Ostrow of Midwest Dairy.

It's why the group is providing a grant for a coffee bar at a fourth high school in the Fort Zumwalt, Missouri district this upcoming year. In exchange, the group gets data on how much milk is used for the lattes, as well as information for personal pizzas, mozzarella sticks and other products with dairy.

But the group might not be happy about one of the newer options: This past year, the coffee bars began offering almond milk for 40 cents extra, said Paul Becker, the district's food director.