He would also ban "vertically integrated" agribusinesses — companies that control multiple levels of production and processing of a product. 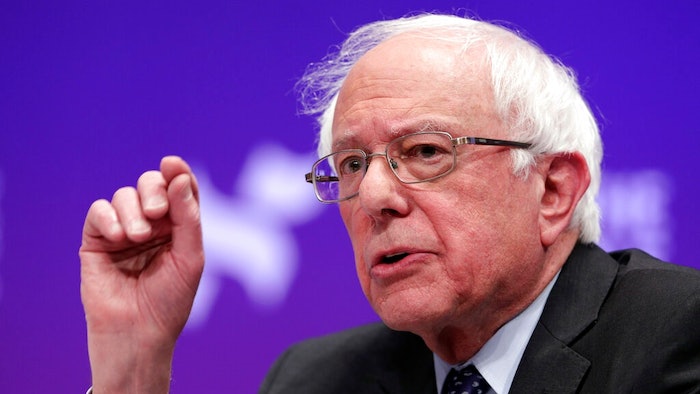 "I think a farmer that produces the food we eat may be almost as important as some crook on Wall Street who destroys the economy," Sanders said during a campaign event in Osage, a town of fewer than 4,000 people. "Those of us who come from rural America have nothing to be ashamed about, and the time is long overdue for us to stand up and fight for our way of life."

Sanders' plan expands on themes that have been central to his presidential campaign in Iowa since the start, including his emphasis on rural America and pledge to take on and break up big corporations.

During his Sunday speech, Sanders outlined the dire circumstances confronting rural America — population decline, school and hospital closures and rising addiction and suicide rates in many rural counties nationwide — as the impetus for his policy.

His plan includes a number of antitrust proposals, including breaking up existing agriculture monopolies and placing a moratorium on future mergers by big agriculture companies. He would also ban "vertically integrated" agribusinesses — companies that control multiple levels of production and processing of a product.

One of his competitors in the Democratic race, Massachusetts Sen. Elizabeth Warren, included several of those antitrust planks in the agriculture policy she released in March. But Sanders' policy is more expansive than just targeting major agriculture corporations — he's also proposing greater government involvement in setting price controls and managing supply and demand of agriculture commodities.

His plan calls for a shift from the current farm subsidy system toward a "parity system," which means "setting price floors and matching supply with demand so farmers are guaranteed the cost of production and family living expenses." Critics of the farm bill have argued that the current government subsidy system favors large family farms and corporate farms over small family farms, and Sanders' policy aims to make that distribution more equal.

Such a major change in agriculture policy would require congressional action and would likely face fierce opposition from the farm lobby — but Sanders pledged to fight for farmers against corporate interests.

"In rural America, we are seeing giant agribusiness conglomerates extract as much wealth out of small communities as they possibly can while family farmers are going bankrupt and in many ways are being treated like modern-day indentured servants," Sanders said.

Sanders would also classify food supply security as a national security issue and increase scrutiny over foreign ownership of American farmland. And he suggests re-establishing a "national grain and feed reserve" in case of a natural disaster or severe weather event — a proposal inspired in part by the recent flooding on Iowa's eastern and western borders, which swamped acres of cropland and wiped out farmers' stores.

Sanders' agriculture proposal includes planks that specifically tailor some of his broader policy priorities to rural America. He has proposed increasing funding for public education and establishing a universal childcare system, and his agriculture plan seeks an increase in funding for rural education and a universal childcare system that provides access for rural Americans to daycare.