More than 31,000 employees authorized union leaders to call for a strike. 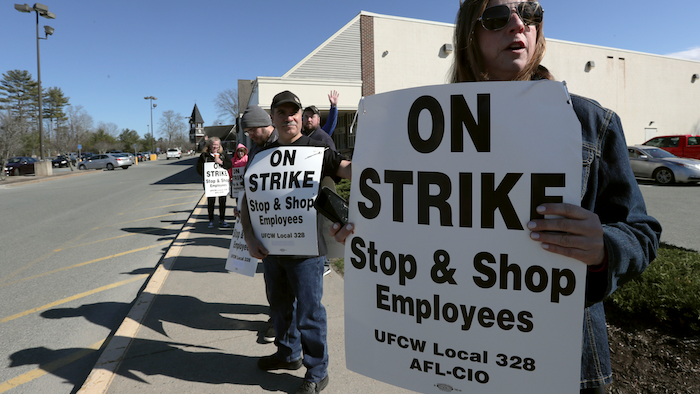 PROVIDENCE, R.I. (AP) — Tens of thousands of employees at Stop & Shop supermarkets in Massachusetts, Rhode Island and Connecticut went on strike Thursday over stalled contract negotiations. United Food & Commercial Workers union members from several locals walked off the job, with some picketing outside the stores.

"The men and women who make Stop & Shop a success have earned and deserve affordable health care, a good wage, and the ability to retire with dignity," the leaders of five locals said in an emailed statement. "They have earned and deserve a good job that allows them to do what they do best: provide the very best customer service for New England communities."

More than 31,000 employees authorized union leaders to call for a strike. Quincy, Massachusetts-based Stop & Shop, a division of Dutch supermarket giant Ahold Delhaize, has 415 stores across the Northeast but the strike affects 240 stores in the three states. Stop & Shop said it has "contingency plans in place to minimize disruption."

According to broadcast reports, managers were keeping stores open and allowing customers to use self-checkout lanes. Stop & Shop said in a statement posted on its website that it was disappointed with the strike given that negotiations are ongoing with the assistance of federal mediators.

"Additionally, this morning the company made several suggestions to the federal mediators to encourage further bargaining," the statement said. "The mediators gave those proposals to the locals late in the morning. The locals provided no counter proposals to the mediators and simply stated they were proceeding with their plans."

The company added that management's "reasonable" offer includes across-the-board raises and health and pension benefits it says are better than most other food retailers. The unions say the company is demanding "unreasonable" wage and benefit cuts.

"Instead of a contract that recognizes the value and hard work that our members provide every day, Stop & Shop has only proposed drastic and unreasonable cuts to health care benefits and take home pay, while replacing real customer service with more serve-yourself checkout machines," the union statement said. The unions said that Ahold Delhaize had more than $2 billion in profits last year and got a U.S. tax cut of $225 million in 2017.