Growers were anticipating a record-high crop in 2018. 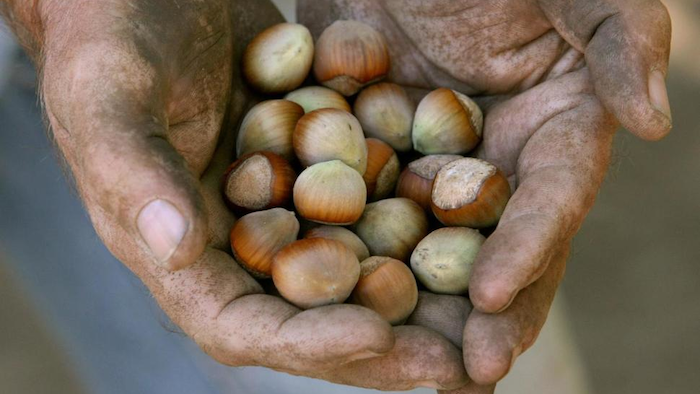 SALEM, Ore. (AP) — Hazelnut growers in Oregon were anticipating a record-high crop in 2018, although it appears the harvest is coming in short of expectations.

The Capital Press reported Monday that the USDA National Agricultural Statistics Service predicted 52,000 tons of hazelnuts in August, which would have beaten the previous record of 49,500 tons in 2001.

Instead, local processors say they are looking at between 46,000 to 48,000 tons, which is higher than last year's 32,000 tons but still not on par with increases in handling capacity.

He said it looks like one of the primary new nut varieties, called Jefferson, did not perform as well as previously thought when the orchards were planted in 2007.

Whatever the explanation, a lesser hazelnut crop doesn't bode well for processors such as George Packing Company, which has invested millions of dollars to increase capacity.

Hazelnut acreage has approximately doubled in Oregon over the past decade, up to 72,353 acres, spurred by new varieties such as Jefferson, Yamhill and McDonald that are resistant to Eastern Filbert Blight.

With the growth in acreage, George said there was a rush to expand alongside the orchards. Nearly all U.S. commercial hazelnuts are grown in Oregon, and George Packing Company is the industry's largest processor and marketer.

Patrick Gabrish, vice president of sales and marketing for Hazelnut Growers of Oregon, a member-owned co-op representing 150 local hazelnut farmers, said he's not overly concerned about lower yields. He pointed out that 33,000 acres of orchards still have not reached nut-bearing age. When they do, he said the spike in volume may help to stabilize prices and develop new markets.

"There's going to be plenty of crop to work with over the next few years," Gabrish said.

Both Gabrish and George raved about this year's crop quality, aided by a dry harvest season that minimized mud and mold. Months of drought, however, also emphasized the need for growers to adopt irrigation and nutrient programs to maximize yields through difficult summers.

This year was already challenging for the hazelnut industry as global factors combined to drive down prices for growers. First, China slapped 15 percent and 25 percent retaliatory tariffs on the product from the U.S. in response to the Trump administration's escalating trade war. Then, the Turkish lira plummeted in value, allowing the country to flood the market with cheap hazelnuts.

"There is a lot of potential," Ross said. "The future is bright."