More than 30 high-tech companies hoping to turn indoor farming into a major future food source, if only they can clear a stubborn hurdle: high costs. 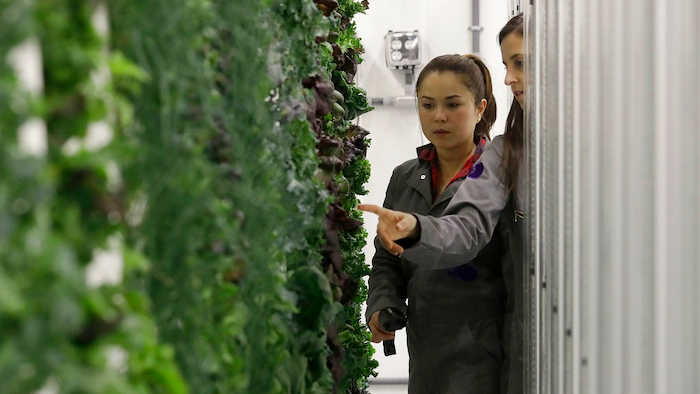 It's full of technologists who grow crops in buildings instead of outdoors, short-cutting the need to prematurely harvest produce for a bumpy ride often thousands of miles to consumers in colder climes.

More than 30 high-tech companies from the U.S. to Singapore hoping to turn indoor farming into a major future food source, if only they can clear a stubborn hurdle: high costs.

These companies stack plants inside climate-controlled rooms, parse out nutrients and water, and bathe them with specialized light. It's all so consumers can enjoy tasty vegetables year-round using a fraction of the water and land that traditional farming requires. Farmers can even brag the produce is locally grown.

But real estate around cities is pricey. Electricity and labor don't come cheap. And unlike specialty crops like newly legal marijuana, veggies rarely command premium prices. (It's tough to compete with plants grown in dirt with free sunlight, after all.)

Even the best-funded indoor farming company on the planet — Plenty, which has raised nearly $230 million so far — has embraced a longtime farmers' crutch: government handouts. It hasn't found any takers yet.

Barnard says public aid — in the form of cheaper power — is one way to turn a good but elusive idea into a sustainable venture.

Last year, the U.S. paid farmers $9.3 billion in direct support, and subsidized weather-related crop insurance to the tune of $5.1 billion. In a nutshell, Barnard argues that some of that money could be diverted to crops that grow in rain or shine.

Visitors arriving via the back door must don full-body overalls and rubber boots dipped in disinfecting shoe baths before entering the air-tight workspace.

Seedlings are grown on flatbeds and bathed in purple light that gives them the look of a 3D movie watched without glasses. Maturing plants are stuffed into columns where they grow sideways, fed by drip irrigation, and irradiated by columns of light-emitting diodes.

The plants will be clipped and packaged before heading to stores later this year.

But there are some noticeable gaps in the menu. There are no carrots or tomatoes, because long roots that grow down and vines that require human pruning don't do well on walls.

For indoor farms, making money has largely meant shipping in bulk to grocery stores, a conundrum if costs aren't in line.

Investment in indoor farming soared to $271 million last year, up from just $36 million in 2016, according to market research firm Cleantech Group.

"The question is, how are they going to scale?" asks Pawel Hardej, CEO of Civic Farms, a vertical farming consultancy in Austin, Texas.

There have been plenty of indoor farming failures already.

FarmedHere shuttered its operations in Louisville, Kentucky, and Bedford Park, Illinois, in January last year due to cost overruns.

Georgia-based PodPonics, which filed for bankruptcy in 2016, cited labor costs as its biggest drag.

Even fans of the technology aren't sure it can beat another sheltered alternative: greenhouses.

"Vertical farming to a lot of (investors) is an 'if' and a 'maybe' versus a 'when,'" says Cleantech adviser Yoachim Haynes. "The question that needs to be answered is, 'Can they do it with cheaper electricity and cheaper labor?' This is not a question that many have been able to answer."

Barnard says Plenty can prosper if it spends 3 to 5 cents per kilowatt hour on power — well below the 10.4 cents that is the average price nationwide, according to the U.S. Energy Information Administration.

While Plenty announced plans to build a 100,000 square-foot facility in the Seattle suburb of Kent in November, it said it isn't in talks about power breaks with any U.S. city now.

Most public support has so far been in rebates for energy-efficient lighting, not running costs.

Seattle City Light provided $10,000 worth of energy-efficient lighting to an indoor growing facility that helped feed the city's homeless. But it already offers the lowest power rate of the top 25 cities in America. "That's the deal that's on the table," says spokesman Scott Thomsen.

Chicago provided some $344,000 in construction grants since 2008 to The Plant , a former pork processing plant that is home to multiple indoor farms.

While that helped with structural improvements, it didn't help with operations, says John Edel, the president of Bubbly Dynamics LLC, which owns The Plant.

Supplying grocery stores in large volumes is "harder than it sounds," he says. And other ways of obtaining cheap power — like The Plant's plan to install a bio-gas guzzling turbine — have faced obstacles that make it uneconomical.

"There isn't a whole lot in the way of incentives for farms here," Edel says. "There needs to be."