It's a shot of good news for the industry. 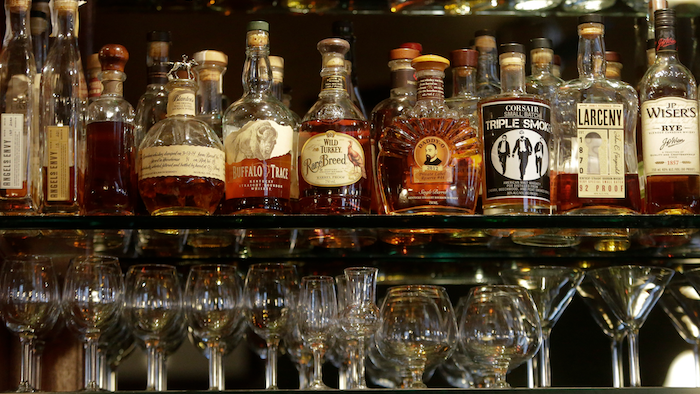 LOUISVILLE, Ky. (AP) — American whiskey makers toasted another round of robust sales in 2017, stirred increasingly by consumers' thirst for the priciest spirits — mixed in cocktails or sipped straight up.

In another shot of good news for the industry, super-premium whiskeys had the biggest volume surge among American whiskeys. Volumes rose 18.3 percent, while revenues were up 18 percent. Those whiskeys typically age the longest and fetch the highest prices.

"The higher priced the product, the faster the sales, virtually across the categories," said Frank Coleman, a spokesman for the distilled spirits trade group.

"Just last week I was stunned to have a guest ask me what whiskies I had from the Buffalo Trace Distillery (in Kentucky) after he stared at my back bar intently for several minutes," he said. "I find I no longer have to explain the difference between bourbon and rye to people, and they frequently ask what bourbon is in our well from a much more informed perspective."

One rung down, the high-end premium category for bourbon, Tennessee whiskey and rye whiskey had volume growth of 5.9 percent. Its revenues rose 7.2 percent.

"With the economy strong and consumer confidence high, shoppers are treating themselves to our sector's pricier products," said David Ozgo, chief economist for the distilled spirits group.

At the other end of the price spectrum, volumes were up just 1.4 percent in the value category and revenues increased 3 percent.

Rye whiskey is a small portion of the American whiskey category, but its volumes surged 16.2 percent last year to 900,000 cases, the report said. The growth was driven by rye's popularity in cocktails.

Vodka, the distilled spirits sector's largest category and representing one-third of all volume, had another solid year with U.S. volumes up 2.2 percent and revenues up 3 percent to $6.2 billion, the report said. Tequila revenues increased 9.9 percent to $2.7 billion.

The top five growth markets by dollar value for American distilled spirits were the United Kingdom, Germany, Brazil, France and Spain, it said.

Kentucky is home to about 95 percent of the world's bourbon production, with such brands as Jim Beam, Evan Williams, Wild Turkey, Maker's Mark, Woodford Reserve and Four Roses.

There are now 39 companies operating 52 distilleries making 6.8 million barrels of aging bourbon in the state, the Kentucky Distillers' Association said. The industry is in the midst of a $1.2 billion building boom.