He runs a bean-to-bar craft chocolate factory while juggling a day job. 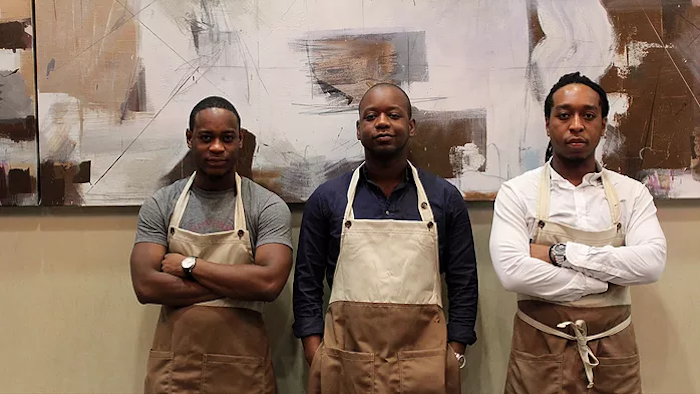 BRIDGEPORT, Conn. (AP) — Ask Daniel Maloney, 26, about chocolate, and he digs into his knapsack for a slender bar wrapped in gold foil.

"You are going to like this," he said with a wide grin, holding up the bar and talking about its "notes of raspberry, cherry and citrus" as if he was describing a fine wine.

A 2009 graduate of Central High School and 2013 graduate of Fairfield University, Maloney has a degree in electrical engineering and a job as a construction manager in Manhattan.

He identifies, however, as a chocolatier and credits his success to a program he joined as a teen.

At the Bridgeport Holiday Inn on Jan. 9 to address a Mentoring for Academic Achievement and College/Career Success — or MAACS — reunion, Maloney told fellow alumni of the college prep program that with enough effort, everyone has the capability to follow multiple passions.

"Each and every one of us has the capability to create a luxury product. To tell a story and transform an emotion. Basically anything is possible if you are willing to sacrifice, be flexible and do the work," Maloney said.

Along with older brothers Dominic and Nicholas — who also graduated from Bridgeport high schools — Maloney runs Sol Cacao, a bean-to-bar craft chocolate factory in the South Bronx. They do so juggling their day jobs: While Daniel manages construction contracts, Dominic is a biotechnologist and Nicholas is a registered nurse.

The three run their chocolate business out of a 2,000-square-foot-factory for six to eight hours after they get off work.

It was something they had talked about doing for years and finally made a reality in March 2015.

"Even in college, I knew I was going to be doing this," said Maloney. "I love chocolate and every step of the process from how it is grown to how it should be enjoyed."

"Growing up, we didn't have much, but we always ate well," Maloney recalls.

The family moved to New York when the boys were young and then to Bridgeport in 2004 when Maloney was in the seventh-grade.

He attended Dunbar, then Central Magnet School. In his senior year, he was introduced to MAACS through Jessica Bromberg, then a coordinator of the program.

Sponsored by the Bridgeport Public Education Fund, MAACS pairs participants with mentors who stick with them through college, helping them with adjustment issues, finances and fitting into college.

"MAACS made me realize the importance of attending college," Maloney said. "I always find myself looking back at the past wondering how life would have turned out without the support of my mentors."

Maloney's mentor was Antonio Musto, a couple of years older than Maloney and a student at Fairfield University. Musto is why Maloney ended up at Fairfield.

"Getting real time insight on what college is like makes a difference," Marge Hiller, director of the fund, said.

To date, the MAACS program has provided mentoring to more than 6,000 students and has a success rate of 95 percent of its students going on to college.

Maloney viewed college as an opportunity to think critically and creatively. He wanted to create something other people weren't really doing.

It took years of research and trial and error to perfect their recipes, settling on two ingredients: cacao beans — sourced from farmers in Madagascar, Ecuador and Peru — and raw cane sugar.

"Craft chocolate is all about letting the bean speak for itself," said Maloney. "Less is more. You will be impressed with how much flavor we are able to generate."

Maloney said his goal is to demystify the chocolate-making process and introduce palates to dark chocolate that tastes differently.

He does not want to be the next Hershey. Hershey, he said, is mostly fat and sugar.

"Hershey disrupts the pallet and confuses people to what chocolate really is," he said.

The brothers sell Sol Cacao online and in markets throughout New York City, along with a smattering of shops from Massachusetts to Oregon.? They are also working on opening a retail space and a cacao tea recipe.

Sol Cacao, as of yet, can not be found in Connecticut, where many people, Maloney said, still do not understand the $8 a bar price point.

In New York, home to five bean-to-bar chocolate makers, it is less of a learning curve.

"People appreciate it for the experience," he said. "It is something special."