Unitherm produces machines for some of the largest food companies in the world. 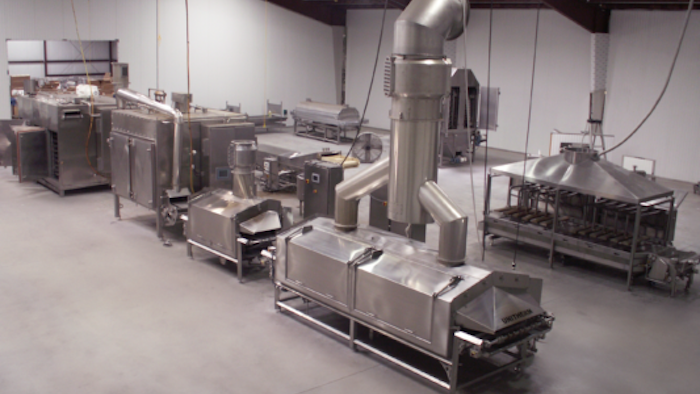 BRISTOW, Okla. (AP) — One could easily drive past Unitherm Food Systems and have no idea that inside the nondescript buildings on the south side of Bristow is a high-tech, international corporation.

More than 60 percent of the processing units built here are shipped overseas. Unitherm has similar plants in Meerssen, Netherlands, and Bangkok, Thailand.

"When it comes to food processing equipment, we would be one of the largest in the world," said Todd Olmstead, a sales rep for the company. "We work with our customers to design and manufacture to their needs.

"We build anything to heat or cool a food product to fully finished ready meals."

What does that mean? Unitherm produces machines for some of the largest food companies in the world — most of them designed and produced at the plant in Bristow.

There's a good chance if you've eaten out, just about anywhere, you had some food that at some point touched a Unitherm machine.

"The company started out by making butcher blocks," said Olmstead. "Over the years, the business just grew. As the needs of food processing grew, so did our business."

"Now, we produce just about anything that heats up or cools a food product."

About 75 people work at the Bristow plant.

The walls of the front offices are covered by dozens of patents awarded by the U.S. and many other countries around the world.

Unitherm is a high-tech, innovation-driven company that often partners with Oklahoma State University researchers from the Robert M. Kerr Food and Agricultural Products Center in the Department of Science.

Peter Muriana, a food microbiologist for the Kerr Center, has worked with Unitherm on a number of new processes.

"We work to validate the process, to make sure it does what it is intended in a safe and healthy process," said Muriana. "We often have students involved on these industry projects.

"They learn different things in there — the routine research needed in industry. It gives them a great degree of experience. It makes them more marketable in the job market. So it's good for us, too."

Recent innovations at Unitherm include a new process for peeling and pasteurizing onions. The company helped develop a process to "flame peel" onions, which made a huge difference in yield for processors, the Tulsa World reported .

"We've been working with Oklahoma State for a long time," said Adam Cowherd, vice president of sales for Unitherm. "We've put a lot of equipment at their research labs, and they've provided us with help in research.

"It's been a fabulous partner for the growth of our company. They help us validate new processes as we search for new and better ways of building food processing machines."

Unitherm was awarded a process patent for onion safety with its gas-fired flame grill to help reduce bacteria. Onions are moved along a conveyor belt and exposed to flames to burn the outer layer where bacteria would reside. A secondary system, with a wet scrub brush, removes the ash residue.

The result? A healthy and safe onion made possible by Unitherm's technology and OSU's research.

Unitherm, which was founded in the United Kingdom in 1985, moved to Oklahoma in the 1990s. It moved from Ponca City to Bristow in the early 2000s, hoping to be closer to international markets through Tulsa.

Founder David Howard, who developed many of the revolutionary machine processes, recently sold the company to Kansas City-based Marlen International.

"David was very innovative," said Muriana. "He would get an idea, and you could just see the wheels turning in his head.

"That's how you get to cutting-edge technology like Unitherm."

Unitherm builds grills, ovens, chillers and freezers, as well as food processors in all sorts of sizes. Its "mini processors" handle about 500 pounds of food per hour.

By contrast, one of the major projects underway in Unitherm's plant is a system capable of processing 100,000 pounds of chicken per hour.

Much of the company's equipment has to be built, tested and then disassembled to fit into containers for shipment overseas.

"The size and the capacity of everything we build is up to the customers," said Olmstead. "We find out the needs of our customers and then we bend and mold our technology to their needs."