The company says that the employee has been fired. 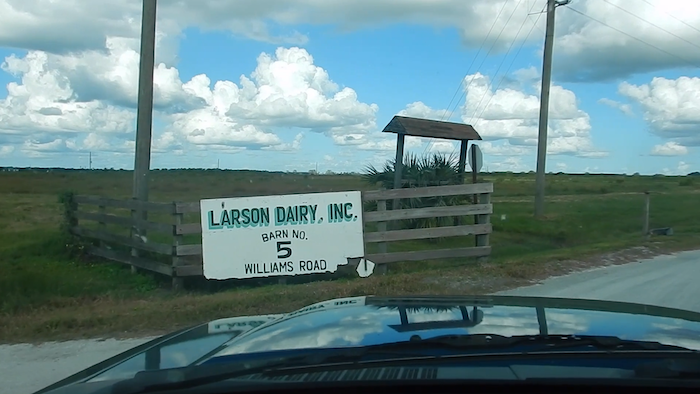 OKEECHOBEE, Fla. (AP) — An undercover video that purports to show workers kicking cows in the head and hitting them with metal rods has prompted authorities to open a criminal investigation at one of Florida's largest dairy farms.

Okeechobee County Sheriff Noel Stephen said during a news conference Thursday that he assigned an investigator to the case involving Larson Dairy. And Florida-based Publix supermarkets announced it has suspended milk deliveries from Larson, adding in a statement the company is "shocked" by the treatment of cows.

Publix said it has contacted the Florida Department of Agriculture about the alleged abuse. In a statement the company said, "we are disturbed by the images and shocked by the cruelty toward animals."

The video was shot by an investigator with Animal Recovery Mission, a Miami Beach-based animal cruelty group, who began working at the dairy in August.

"Dairy supervisors and milkers beat, stab and torment dairy cows with steel construction rebar," the narrator says. "The sharp metal rods pierce and penetrate the cows' bodies. Kept hidden from tours and visitors to the dairy, the cows are brutalized."

In a statement, Jacob Larson said an employee seen in the video hitting cows has been fired, adding that the "unusual use of force is simply unacceptable on our dairy or on any other farm."

"We have strict protocols involving animal care and clearly the behavior shown in this video goes against everything we stand for and will not be tolerated," Larson said. "The employee involved and featured in the video has been terminated. Further corrective action will be taken if necessary as we continue to analyze the video and conduct an on-farm investigation."

Larson, whose family has been in the dairy business since 1947 and in Okeechobee County since 1971, questioned the tactics of the animal rights group.

"We are equally concerned about the manner in which this video was brought to our attention," Larson said. "Had the 'undercover' employee brought this to our attention when it occurred, we may have been able to prevent it earlier."

Richard Couto, the founder and lead investigator for the animal rights group, said members didn't choose the Larson dairy because of any cruelty reports but within an hour of starting the undercover operation found "strong sounds of animal abuse."

"We wanted to see what was happening in a typical, larger scale dairy setting in the state of Florida," he said.

The sheriff said the material received by his office included still photos, but no video. It indicated three workers were involved.

He said he's known the Larson family for years, noting that they wouldn't condone this kind of activity.

"Had they known about it," Stephen said, "they would have fired them on the spot."