Ranchers want to force meat to again be labeled if it's produced in other countries and imported to the U.S. 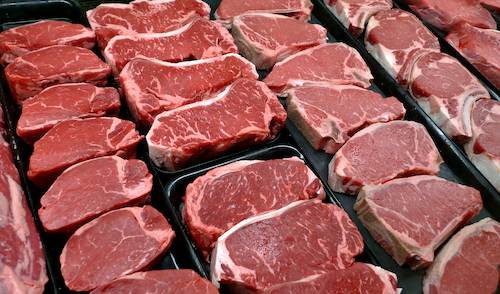 SPOKANE, Wash. (AP) — Ranchers on Monday sued the U.S. Department of Agriculture, seeking to force meat to again be labeled if it's produced in other countries and imported to the United States.

The lawsuit, filed in federal court in Spokane, seeks to overturn a March 2016 decision by the Department of Agriculture to revoke regulations requiring imported meat products to be labeled with their country of origin. That change allowed imported meat to be sold as U.S. products, the lawsuit said.

"Consumers understandably want to know where their food comes from," said David Muraskin of Washington, D.C., an attorney for Public Justice, which filed the lawsuit. "With this suit, we're fighting policies that put multinational corporations ahead of domestic producers and shroud the origins of our food supply in secrecy."

Between 2009 and 2016, the USDA required country-of-origin labeling on meat.

The lawsuit said the change violated the nation's Meat Inspection Act, which required that slaughtered meat from other countries be clearly marked.

The Department of Agriculture on Monday declined to comment on a matter that is in litigation.

The lawsuit was brought by the Ranchers-Cattlemen Action Legal Fund, United Stockgrowers of America, the nation's largest group of independent cattle producers, and the Cattle Producers of Washington.

Multinational corporations use the lack of clear labels "to import more beef from more foreign countries, including countries with questionable food safety practices," he said.

The lawsuit asks the court to vacate USDA's current regulations, which allow corporations that import beef and pork and other products into the United States to label that meat "Product of USA."

Beth Terrell, another attorney for Public Justice, which is a nonprofit legal group, noted that President Donald Trump initially expressed support for country-of-origin labeling, but he has since backed off. "Both consumer advocates and domestic producers were disheartened by President Trump's reversal," Terrell said.

More than 800 million pounds of foreign beef is imported into the United States each year, Public Justice said.

Without country-of-origin labeling, "domestic ranchers and farmers tend to receive lower prices for their meat because multinational companies can import meat and misleadingly present it as homegrown," Public Justice said in a news release.