They didn't offer specifics or a timetable for the plant that now can produce up to 1.8 million proof gallons each year, or about 750,000 9-liter cases. 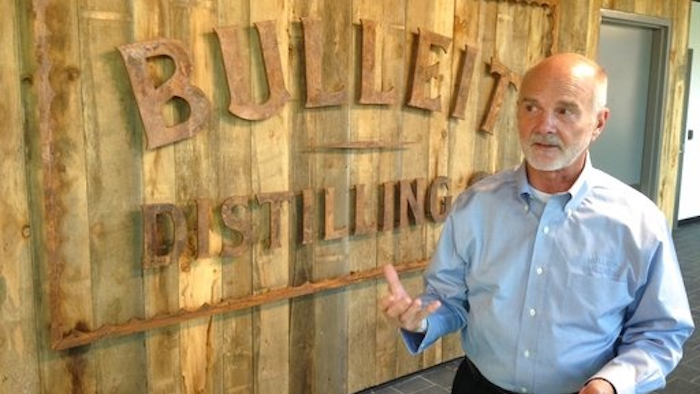 SHELBYVILLE, Ky. (AP) — Bulleit bourbon has reached a milestone in its maturity with the opening of its first distillery. It's riding the wave of bourbon's popularity as its parent company — spirits giant Diageo — looks to expand a brand started 30 years ago when Kentuckian Tom Bulleit (BUL'-liht) revived his family's whiskey recipe.

Company executives gathered with state and local officials Tuesday to mark the opening of the $115 million Bulleit distillery near Shelbyville, Kentucky, about 30 miles east of Louisville. Diageo sees the distillery, built on rolling farmland in Shelby County, as a catalyst for the brand that has flexed its muscle with annual double-digit sales growth in recent years.

"This distillery is the most important thing we can do to grow our business," said Bulleit's U.S and global brand director, Ed Bello. "We have big ambitions to continue to grow the brand in the U.S. and expand it globally."

Bulleit's growth could mean an even bigger distillery.

As bourbon production started in recent days, Diageo officials were already talking about expanding. They didn't offer specifics or a timetable for the plant that now can produce up to 1.8 million proof gallons each year, or about 750,000 9-liter cases.

"We will be quickly pivoting to start looking at what the expansion plans could be," Bello said in a phone interview.

Diageo's other brands include Johnnie Walker, Smirnoff and Guinness.

Global sales for the Bulleit brand, which includes rye whiskey, reached 1.1 million cases in the fiscal year ending in June 2016, up 29 percent from the prior year. A decade ago, Bulleit's sales amounted to about 37,000 cases.

Bourbon represents about two-thirds of current sales, which rose another 25 percent in the first half of this fiscal year. U.S. markets account for the bulk of sales, though Bulleit has spread to more than 60 countries. Its biggest foreign markets are Canada, Great Britain and Germany.

While Bulleit bourbon is made in-house, the brand's rye will continue to be made under contract at a non-Diageo distillery, using the brand recipe. Bulleit bourbon also was made at non-Diageo distilleries until the Shelbyville plant opened. The brand's rapid growth means Bulleit will continue relying at least for a while on contract production for some of its bourbon, the company said.

Bulleit was started in 1987 by Kentucky lawyer Tom Bulleit, who now serves as a brand ambassador.

"It's a dream realized," Bulleit said of the distillery, which features a 52-foot still.

His great-great-grandfather, tavern keeper Augustus Bulleit, made whiskey in the pre-Civil War era, according to a website for the brand. Augustus Bulleit vanished while transporting his barrels of bourbon to New Orleans.

The family recipe gathered dust for more than a century until Tom Bulleit brought it back.

The new distillery will give Bulleit considerable control over its production, rather than relying on contract suppliers that face increasing pressure to meet their own market demands as every drop of bourbon becomes more valuable.

"This was a move to assure supply, since it's becoming more difficult for any non-distiller producers to get supply on the open market," said Chuck Cowdery, an American whiskey writer and author of "Bourbon, Straight."

Bulleit's distillery grounds, spanning 300 acres, include four barrel warehouses, holding up to 55,000 barrels each, with two more expected to open by year's end. The distillery employs about 30 people. The distillery does not include a visitors' center, but a future expansion could potentially include one to tap into Kentucky's growing bourbon tourism, Bello said.