He started a brewery in a country where many frown on consuming alcohol. 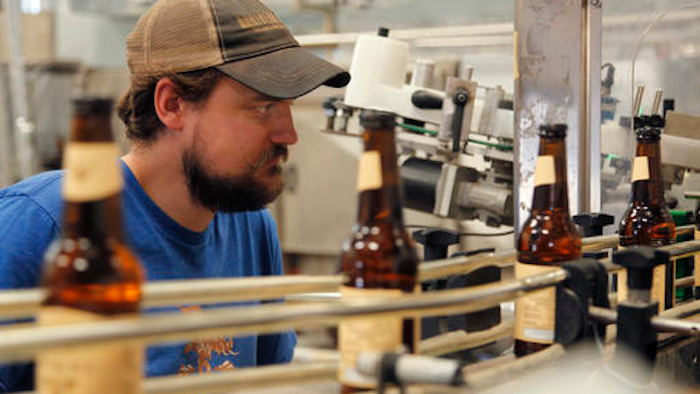 FUHEIS, Jordan (AP) — It took gumption to pour millions of dollars into starting a brewery in an overwhelmingly Muslim country where many frown on consuming alcohol.

Jordanian beer pioneer Yazan Karadsheh is now taking his next risky step, sending a first shipment of his Carakale to the U.S., where it will compete with thousands of brands in a $22 billion-a-year craft beer market.

The 32-year-old Karadsheh is part of a small but growing brotherhood of Arab brewers in the Levant who want to nurture local beer-drinking cultures and compete against the brews of large companies, some of them multi-nationals that dominate the region's beer market.

Carakale is the first craft beer in Jordan. The West Bank already has three independent breweries — well-established veteran Taybeh, newcomer Shepherds and tiny Wise Men's Choice, made in a basement near biblical Bethlehem. Lebanese brands include Colonel, made at a large brew pub in the coastal town of Batroun, and 961, named after the country's international dialing code. Small breweries also sprang up in Israel over the past decade.

It's a modest revival in a region where beer-brewing traditions go back to ancient Egypt and Mesopotamia, but lay dormant for centuries.

Demand is also up. Regional beer consumption increased by 44 percent over the past decade — though the close to 4 million hectoliters (105 million gallons) guzzled in nine Arab countries and Israel last year amount to a drop compared to U.S. consumption of 234 million hectoliters (6.1 billion gallons), according to industry figures and IWSR, an alcoholic drinks research company.

"Obviously, they drink," Karadsheh, a member of Jordan's Christian minority, said of his compatriots. "Alcohol might be taboo, but you can find alcohol and buy alcohol easily in the market. Jordan is a very liberal place, compared to surrounding countries."

Karadsheh and other up-and-coming brewers — Shepherds founder Alaa Sayej in the West Bank and Colonel creator Jamil Haddad in Lebanon — stumbled onto their career-changing passion by chance.

Karadsheh studied engineering in Boulder, Colorado, a decade ago, but then got a second degree in brewing. Sayej, 27, earned a master's degree in finance, but began brewing in his U.K. dorm room. Haddad, 33, quit a job in advertising to turn his long-time beer brewing hobby into a business.

In liberal, diverse Lebanon, getting a brewing license was a simple procedure unfettered by social taboos, said Haddad. By contrast, Karadsheh and Sayej battled red tape and religious backlash.

Sayej said officials in the Palestinian self-rule government initially rejected his label featuring the drawing of a shepherd, insisting it was a depiction of Jesus and thus blasphemous on a beer bottle. Sayej, a Christian, said it took him three months to persuade the authorities otherwise.

There was also trouble in his home village of Bir Zeit, where he set up his brewery.

Once predominantly Christian, the village has a growing Muslim population. At a recent Bir Zeit heritage festival, Shepherds decided to remove its booth after a local Muslim preacher railed against the brewery at the local mosque, saying it's "haram," or religiously forbidden. Sayej said he withdrew because he didn't want to disrupt community relations, but that Shepherds later staged its own festival in Bir Zeit.

Karadsheh's initial land deal for his brewery fell through because the owner didn't want to be linked to alcohol production. Karadsheh found another plot near Fuheis, a predominantly Christian community close to Amman. During construction, a tile layer walked off the job, feeling it was wrong to work in a brewery.

All three feel passionate about what goes into their different styles of beers, including seasonal brews for the summer and for Christmas, as well as staples like blond ale, wheat and stout beer.

Karadsheh and his onsite brewer, Jordan Wambeke, hope to break into the U.S. market with beers infused with distinctly Middle Eastern flavors, such as a coffee porter with a pinch of cardamom and a hint of date molasses.

"In general, people go to imports looking for something different, something they absolutely can't get locally, and something that is going to last the trip overseas," said Wambeke, 28, who is from Cody, Wyoming, and joined Carakale six months ago.

The first shipment of about 7,000 liters is to leave the Fuheis brewery in the coming weeks for a warehouse in New Jersey, for further distribution along the East Coast, said Karadsheh.

Carakale will be competing with products from more than 4,500 craft beer breweries in the U.S., where two more microbreweries open each day, said Bart Watson, chief economist at the Brewers Association, which represents independent brewers.

Watson said it's a challenge to break into the competitive U.S. beer market, worth more than $100 billion a year, but that consumption of craft beers and imports is growing. "Any company that can differentiate itself and offer something new has an opportunity," he said.

Sayej, who teamed up with younger brothers Khalid and Aziz — the company slogan is "brewed by brothers for friends" — also hopes to export. He said he has pre-orders from Italy, the U.K., Sweden, Belgium and the U.S., but is waiting to install pasteurization equipment this fall. Pasteurization helps beer survive a long journey, he said.

Sayej banks on the beer's origins for his marketing strategy.

"We have the best ingredient in the world to distinguish us," he said jokingly. "It's Holy Land water."

Veteran brewer Nadim Khoury, who launched Taybeh beer in the West Bank in 1994 and now makes 600,000 liters a year, takes pride in being the first to put Palestinians on the global beer map.

"We don't have a country," Khoury said of decades of failed efforts to set up a Palestinian state. "But we have our own beer."