A small brewery received an angry letter about its efforts. So they gave it the one finger salute and lit it on fire. 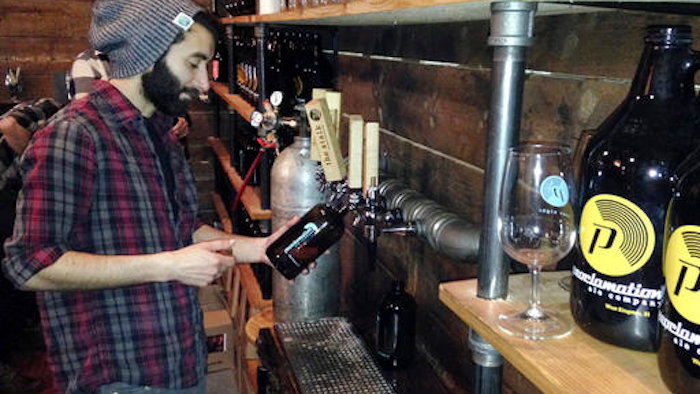 PROVIDENCE, R.I. (AP) — Proclamation Ale Co., a small Rhode Island brewery that's pushing to change the state's beer laws, recently received an angry letter about its efforts. In response, the brewer set the letter on fire and posted to Facebook a photo of him holding the flaming document while flanked by brewery employees, with everyone raising a middle finger.

"It's Proclamation," said Dave Witham, the primary owner and brewer. "I thought we should make a statement."

The anonymous letter appeared to be from a liquor retailer, upset that Proclamation is urging lawmakers to remove the limit on the amount breweries can sell to visitors on site for consumption off premises.

Rhode Island allows for 72 ounces per visitor. Many other states have a higher limit or none at all. Among Rhode Island's neighbors, Connecticut's limit is 9 liters; Massachusetts doesn't have one.

The owners of Proclamation in West Kingston, Rhode Island, say that if the state's breweries could sell more beer directly to consumers, they could afford to hire more people and make more beer to send to distributors for the retailers, so every tier of the system benefits.

Some retailers, however, feel that the current system works well and protects the public. And some worry that changing it could be bad for their businesses.

The letter, which was postmarked in Providence and mailed to Proclamation in late March, says, "Retailers are happy to see small breweries succeed with their endeavors, but it should not happen at their expense."

The section of the law in question dates to 1933, when Prohibition was repealed. Under a three-tiered system, manufacturers sell alcohol to distributors, who, in turn, sell to retailers.

Lawmakers introduced bills this legislative session to remove the 72-ounce limit, arguing that Rhode Island needs to modernize, support its breweries and embrace beer tourism. Democratic Rep. Joseph Solomon, of Warwick, said he thinks changing the law could help retailers, since people who like the beer at the brewery will likely buy it in the future at their local liquor store.

"It's not taking away from anyone," he said. "It's an easy way to create jobs and boost the economy."

On Friday at Proclamation, about 100 people lined up outside the building for the release of a new beer.

The first in line, Ryan Lagace, said he went to the brewery to try the new beer, but he usually goes to breweries in Massachusetts because he can buy as much beer as he wants.

"Every time I go, I go out to eat, buy gas, make other purchases," said the 32-year-old resident of Burrillville, Rhode Island. "You can take that beer tourism and turn it into something profitable for the state, not just the breweries."

Proclamation opened in 2014. Witham said he's hoping Rhode Island lawmakers, who often talk about the need to create jobs, will support changing the law so breweries can grow.

Craft breweries in Rhode Island have an annual economic impact of about $160 million, which ranks 48th in the nation, according to the Brewers Association, which advocates for craft brewers.