Company started with a college student on a bus, holding a fish tank filled with black sand, fish food, a few air and water pumps, and three fish. 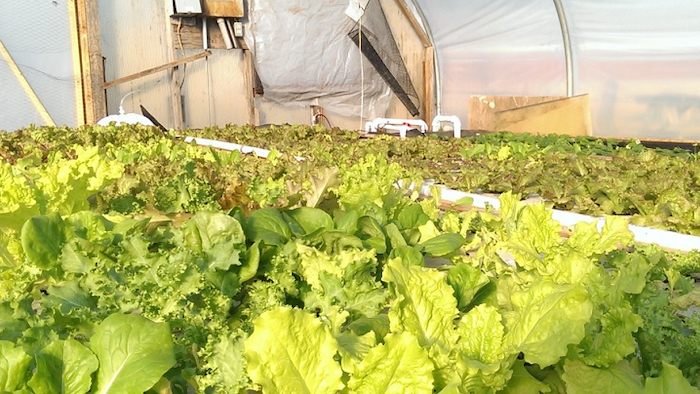 FRESH Farm Aquaponics, of Glastonbury, was born several years ago with a college student on a bus, holding a 20-gallon fish tank filled with black sand, fish food, a few air and water pumps and a trio of platy fish darting around in a water-filled bag.

With those ingredients, Spencer Curry made an aquaponics farm in his college dorm room. Now he is CEO of a company that uses fish, water and seedlings on a bed of shale to grow everything from strawberries to lettuce to herbs.

Over the past few years, the company has grown from Curry's backyard in South Glastonbury to a 1,000-square-foot greenhouse on a farm, a teaching and growing facility at Arc Meriden-Wallingford Inc. It has been integrated into elementary, high school classrooms and colleges across the state.

Things are going so well that the company is planning to expand into a research and education facility in Hartford.

"This is for the backyard farmers who are serious about growing food," Curry said. "We are focusing our time and effort on helping people to grow their own food."

Although aquaponics has been around since ancient times, FRESH Farm is not only about creating sustainable farming and the best quality organic food. It's about teaching a younger generation about the potential and value of aquaponics and getting people to create their own system in their homes for fresh food year-round.

For Curry, the world of aquaponics has been not only about food production, but also about teaching and community outreach. With urbanism rising and farmland disappearing, the time is right for sustainable farming and "enabling the next aquapioneer to grow to their fullest potential," he said.

"We want to reinvigorate farming back into the schools," he said. "We want a whole new generation to become aquaponic literate. We are about growing more growers and empowering people for the future. ... We are intent on integrating modern technology into old farming. We are breaking down barriers so anyone can grow like a fourth-generation farmer."

Anyone can have an aquaponic garden. The concept is rather simple. An aquafarmer needs fish— the best are koi, Spencer said, because of the waste they produce —and a large aquarium or tank. That water is pumped and circulated into nearby grow beds filled with small shale rocks. (The size of the tank and number of fish depends on how large of a garden is planned.) The waste is broken down by bacteria into nutrients and fertilizer for the plants and the fertilized water saturates the bed of shale and a layer beneath it called the underdeck, where there is about a foot of water, and where roots dangle like tentacles of a jellyfish.

In an ARC facility in Meriden— an organization that works with people with disabilities —strawberries, jalapeno peppers, swiss chard, microgreens, lettuce and nasturtiums grow in the beds with LED lights glowing above them. The people behind this company believe aquaponics is the future, in particular because no pesticides or herbicides are used, as is common on commercial farms. The company finds natural ways to deal with pests like using ladybugs.

"At the end of the day, we are farmers and this all doesn't happen overnight," said partner and chief discovery officer Eric Francis. "It takes time to get the microbes and bacteria going. ... We believe aquaponics is an up-and-coming business."

Curry, Francis and president Kieran Foran have worked hard to acquire grants for their business. Two years ago, they received a $12,000 grant from Connecticut Innovations, a program the state created to help startups. They recently received a $65,000 grant from the USDA for the Hartford facility. FRESH Farm has also received "crowd favorite" awards from CTNext, a group that helps innovative companies grow.

The group has started small, offering its produce to the public year-round, but also has teamed up with area farms to bring in other offerings it can sell, including apples and even pork from a South Glastonbury farm. The company maintains services systems in area schools, where the aquafarms are part of the curriculum.

"It's a low-cost option for people in the community," Foran said. "We want to make it as easy as possible for people to start this."

Pamela Fields, executive director of Arc Meriden-Wallingford Inc., said FRESH Farm took an underachieving aquaponics system at her facility and improved it so that it's usable.

"Each of them bring their own expertise to the program," Fields said. "But they also have the personalities to work with our guys. It's hard to have both in the right mix, but they do. They are constantly coming up with new ideas and trying to grow ideas. They've really launched it and got it going."

As for the future, the company is working on a system that hangs vertically for growing lettuce, basil, strawberries and mint— the most valuable crops for restaurants and markets. The system, which can fit in the corner of a room, uses a tube filled with bio-char, an organic mixture for plants to grow in. Water from the aquarium circulates over the mixture and plants through a series of pipes.

"This is really beyond organic," Curry said. "There is nothing synthetic in aquaponics. If you used chemicals on the plants it would kill the fish. And any chemicals used on the fish would kill the plants. ... We think this is the future and we are very excited about it. And we want to make it as accessible as we can for people."