He says the world must dramatically change the way it fuels factories, vehicles and homes. 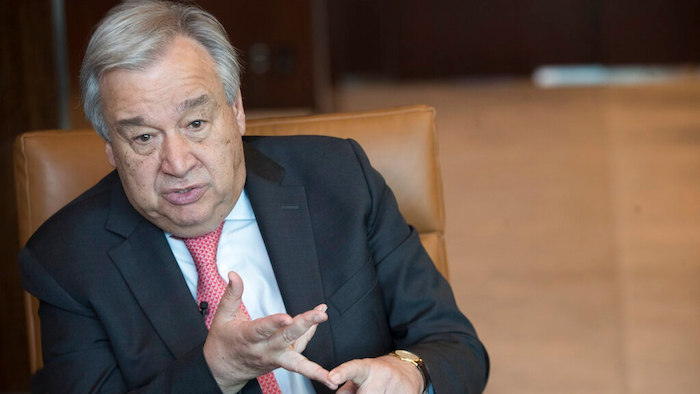 United Nations Secretary-General Antonio Guterres is photographed during an interview at United Nations headquarters on Tuesday, May 7, 2019. Guterres said the world has to change, not in small incremental ways but in big “transformative” ways into a green economy with electric vehicles and “clean cities” because the alternative “would mean a catastrophic situation for the whole world.”
AP Photo/Mary Altaffer

That's because the alternative "would mean a catastrophic situation for the whole world," António Guterres told The Associated Press in an exclusive interview.

Guterres said he's about to tour Pacific islands to see how climate change is devastating them as part of his renewed push to fight it. He is summoning world leaders to the U.N. in September to tell them "they need to do much more in order for us to be able to reverse the present trends and to defeat the climate change."

That means, he said, the world has to change, not in small incremental ways but in big "transformative" ways, into a green economy with electric vehicles and "clean cities."

He said he wants countries to build no new coal power plants after 2020. He wants them to put a price on the use of carbon. And ultimately he wants to make sure that by 2050 the world is no longer putting more greenhouse gases into the air than nature sucks out.

Global temperatures have already risen about 1.8 degrees (1 degree Celsius) since the industrial age began. The issue is how much more the thermometers will rise.

In 2015, the world's nations set a goal to limit global warming to no more than 0.9 degrees (0.5 degrees Celsius) from now. Most scientists say it is highly unlikely, if not outright undoable, to keep man-made climate change that low, especially since emissions of heat trapping gases are rising, renewable energy growth is plateauing, and some countries' leaders and voters are balking. A panel of scientists the U.N. asked to look at the issue ran computer models for more than 500 future scenarios, and less than 2% achieved those warming limits.

Guterres said the wholesale economic changes needed to keep the temperature from rising another degree or more may be painful, but there will be more pain if the world fails.

"If you don't hang on to that goal, what you'll achieve is a total disaster," the secretary-general said in his 38th floor conference room.

If countries only do what they promised in the 2015 Paris climate agreement, it would be catastrophic because the world would warm by another 4.5 degrees (2.5 degrees Celsius), Guterres said, adding "that is why we need to dramatically accelerate... what everybody knows needs to be done."

Yet, globally the trends are going the other way. University of Michigan environment dean Jonathan Overpeck said it looks unlikely that the world could prevent another 1.8 degrees (1 Celsius) of warming, let alone 0.9 degrees.

And in an odd way that gives the U.N. chief optimism.

Because as disasters mount and deaths increase, the public, especially youths, will realize that warming is "a dramatic threat to the whole of humankind," Guterres said.

So the worse it gets, the more people will demand change, he said.

That's why he's about to visit the islands of Fiji, Tuvalu and Vanuatu in the Pacific Ocean, which he said is hit hardest by climate change.

Guterres said he wants to use the determination and moral authority of the people who live on the threatened islands to convince world leaders to make necessary change.

Here are some excerpts from the 25-minute interview with Guterres, who said he used to love steak houses but now only goes once every three months because livestock contribute significantly to warming. The questions and answers have been edited for clarity and length:

Q: How can you be optimistic?

A: That is the paradox. Things are getting worse. Temperatures are rising faster than expected. We see the Arctic melting. We see glaciers disappearing. We see corals bleaching. We see biodiversity being dramatically threatened. So things are getting worse and worse. But the political will has been slow. We need to reverse this trend. We need to make people understand that this is not sustainable. And the reason why I'm optimistic is that I feel that more and more people are convinced of that. And as more and more people are convinced of that, I believe governments will feel the need to increase their political will which at this present moment is still lagging behind.

You have seen the fantastic attitude of young girls and boys making a strike in favor of climate action. You see more and more business and communities assuming responsibilities.

Q: Can you fight climate change and biodiversity loss at the same time?

A: Climate change is a major threat to biodiversity. It's because of climate change that species are disappearing. So we need at the same time to be concerned with the climate action... with our oceans... to make sure that we keep the richness of a planet that was created by God. And I don't believe God would be very happy to see many of his creatures disappearing."

Q: How do you see the United States and the Trump administration on climate?

A: In the United States I disagree with the policies that the government has implemented. But I see fantastic attitudes and fantastic developments in what is done by large businesses, by cities, by the civil society. I can see the United States a country with an enormous potential to achieve what needs to be achieved for us to be able to defeat climate change.