74 percent of Americans say extreme weather in the past five years — hurricanes, droughts, floods and heat waves — has influenced their opinions. 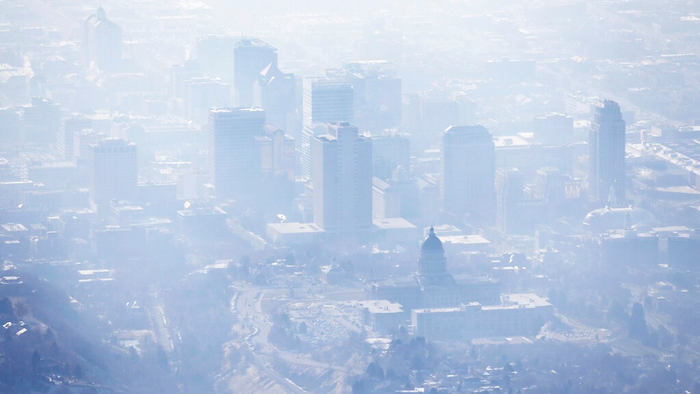 In this Jan. 18, 2017, file photo, smog covers Salt Lake City as an inversion lingers. When it comes to their views on climate change, Americans are looking at natural disasters and their local weather, according to a new poll.
Ravell Call/The Deseret News via AP, File

WASHINGTON (AP) — When it comes to their views on climate change, Americans are looking at natural disasters and their local weather, according to a new poll.

Lately, that means record deadly wildfires in California, rainfall by the foot in Houston when Hurricane Harvey hit and the dome of smog over Salt Lake City that engineer Caleb Gregg steps into when he walks out his door in winter.

"I look at it every day," Gregg said from Salt Lake City, where winter days with some of the country's worst air starting a few years ago dinged the city's reputation as a pristine sports city and spurred state leaders to ramp up clean-air initiatives. "You look out and see pollution just sitting over the valley."

"I've never really doubted climate change - in the last five-ish years it's become even more evident, just by seeing the weather," the 25-year-old said. "We know we're polluting, and we know pollution is having an effect on the environment."

The poll by The Associated Press-NORC Center for Public Affairs Research and the Energy Policy Institute at the University of Chicago finds 74 percent of Americans say extreme weather in the past five years — hurricanes, droughts, floods and heat waves — has influenced their opinions about climate change. That includes half of Americans who say these recent events have influenced their thinking a great deal or a lot.

About as many, 71 percent, said the weather they experience daily in their own areas has influenced their thinking about climate change science.

The survey was conducted in November, a few days before the federal government released a major report revving up scientific warnings about the impact of climate change, including the growing toll of extreme storms and droughts.

The share of Americans who said they think the climate is changing has held roughly steady over the last year — about 7 in 10 Americans think climate change is happening. Among those, 60 percent say climate change is caused mostly or entirely by humans, and another 28 percent think it's about an equal mix of human activities and natural changes.

Overall, 9 percent of Americans said climate change is not happening, and another 19 percent said they were not sure.

The poll finds Americans' personal observations of real-time natural disasters and the weather around them have more impact than news stories or statements by religious or political leaders.

"It speaks to what we know of what people trust. They trust themselves and their own experiences," said Heidi Roop, a climate scientist at the University of Washington's Climate Impact Group who focuses on the science of climate change communication.

For a long time, the idea that the acrid black billows from car and truck tailpipes and power plant smokestacks were altering the earth's atmosphere still seemed abstract, with any impacts decades away.

"With the extreme events that we've been seeing, we're increasingly able to attribute, or pull out, how human-caused climate change is making those more severe," Roop said.

When wildfires get bigger and more frequent, floods bigger and smog more entrenched, it begins to hit "the things that we all hold dear, and that's when people get affected and begin to connect the dots," Roop said.

In West Haven, Connecticut, 69-year-old Alan Perkins says he can see the climate is in fact changing — the Atlantic beaches a few blocks from his house are about a third smaller than when he used to play on the sand as a kid, Perkins said by phone. Scientists say climate change will mean warming oceans expand and waves get rougher, eating away at shorelines.

"I see erosion along our shorelines. Our beaches are getting smaller. I see that," Perkins said.

Elizabeth Renz, a 62-year-old homemaker in Cincinnati, says the rise in temperatures globally and the surge in natural disasters in the United States is "just happening naturally."

"Our earth is cycling through it, and I don't know there's much we can do about it," she said.

She points to communities expanding into deserts and other unwelcoming terrain.

"We're living in areas that we shouldn't be living in," she said.

The poll shows that Americans are ready to pay more to deal with the changing climate — but not to pay very much.

A majority of Americans, 57 percent, would support a proposal that would add a $1 monthly fee to their electricity bills to combat climate change. But most oppose proposals that would increase their own monthly costs by $10 or more.

The poll also examined views on one of the Trump administration's proposals to roll back future mileage standards for cars and light trucks. That would hit one of the Obama administration's key efforts to reduce climate-changing fossil fuel emissions.

When told the proposal to freeze standards could lower the cost of vehicles — the Trump administration's argument for the rollback — 49 percent said they support the proposal, compared with 17 percent who were opposed. Another third said they neither support nor oppose.

But when the question suggested the freeze could mean greenhouse gas emissions would not be reduced, 45 percent said they oppose the proposal, compared with 21 percent who were in favor.

The poll also found majorities of Americans would support a tax on emissions of carbon-based fuels, such as coal, natural gas and oil, if the money generated were used to fund research and development for renewable energy (59 percent), to restore forests and wetlands (67 percent) or to boost public transportation (54 percent).

For Daniel Swain, a climate scientist at the National Center for Atmospheric Research, the willingness of Americans to pay at least some extra money to tackle climate change is "actually still a pretty strong signal."

When climate change becomes "a problem in general but also specifically their problem, then people are going to have more ownership of it," Swain said.

The AP-NORC poll of 1,202 adults was conducted Nov. 14-19 using a sample drawn from NORC's probability-based AmeriSpeak Panel, which is designed to be representative of the U.S. population. The margin of sampling error for all respondents is plus or minus 3.9 percentage points.

The survey was paid for by the Energy Policy Institute at the University of Chicago.

UN: Env't is Deadly Mess, But Not Hopeless