Russell Wilson, Doug Baldwin, Jerry Rice and Roger Staubach are among the investors or advisers for the company. 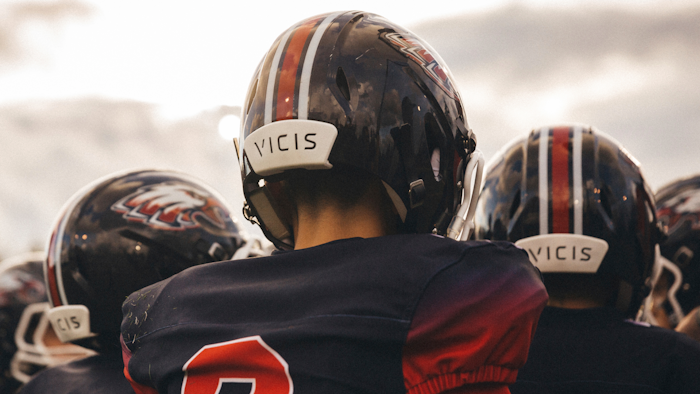 In this photo provided by VICIS, youth football players wear the company's new youth helmets during a helmet test-fitting and practice in Seattle, date not known. VICIS, a company that already makes helmets for NFL football professional players, is bringing its youth helmet to market with investment from several NFL players, including Green Bay Packers quarterback Aaron Rodgers.
VICIS

SEATTLE (AP) — VICIS, the top-rated helmet maker for pros according to an NFL survey, is bringing its youth helmet to market with investment from NFL players, including Aaron Rodgers.

The company announced Thursday that its ZERO1 YOUTH helmet is now available, capping several years of development and study in the attempt to make a safer youth helmet available for young football players.

"We looked at the scientific literature and we studied what is different about young players. Their anatomies, the sort of impacts that they impact on-field. And we've designed that helmet specifically for kids," VICIS CEO Dave Marver said in an interview with The Associated Press. "The helmet, for example, is tuned to lower impact velocity. Its impact performance is extremely good in the front and side locations, which is where the scientific literature suggests they are experiencing the majority of the hits. It's lighter in weight than other helmets, which reflects that kids their necks are not as well built as adults for example. This is the first helmet of its kind on the market that is truly designed and optimized for kids, whereas the other youth helmets that are out there are the adult helmets with lightweight shells."

VICIS has been working toward getting into the youth market since refining the design of its helmet that is used at the professional, collegiate and high school level. The ZERO1 YOUTH is hitting the market on the same day the company announced a Series B investment of $28.5 million that includes contributions from Rodgers through his company Rx3 Ventures.

"We invested in VICIS because its commitment to player safety — specifically at the youth level — is one we wanted to support," Rodgers said in a statement. "We look forward to working with VICIS as they continue to develop outstanding technologies for players at all levels."

VICIS is also attempting to regulate the cost in bringing its technology to the youth helmet. Benefiting from increased volumes, this season VICIS reduced the price of its ZERO1 helmet for pros, colleges and high schools, called varsity, to $950. NCAA and high school programs that purchased the ZERO1 in volume qualified for pricing under $800 per helmet.

Marver said the youth helmet will cost between $450-495, which he says is about 20 percent higher than current youth helmets on the market.

VICIS isn't alone in the youth development field. Riddell has its InSite Training Tool, which provides such specific data that it is applicable at the youth, high school, college and pro levels. Basically, it tells observers if an out of the ordinary impact happens on the field.

Marver said the feedback VICIS has received from the growing number of NFL players using the helmet helped contribute to the development of the youth helmet. Among the investors or advisers for the company are Rodgers, Russell Wilson, Doug Baldwin, Jerry Rice and Roger Staubach.

"The NFL player investment has been very important to us as a company, It's been highly validating, and that elite players at the top of the game have seen the technology and chosen to invest in us," Marver said. "It has also I think given the confidence to other investors to also support our efforts to develop new technology in football and other sports. And it's also led to a higher level of engagement from those NFL players than one would typically get from a garden-variety advisory relationship. These players are keenly interested in the technology, in providing feedback on helmet fit, helmet comfort, helmet performance. So we benefit a lot as a company from having those very close relationships."