Several factories were raided after allegedly were using a loophole to illegally import and process electronic waste. 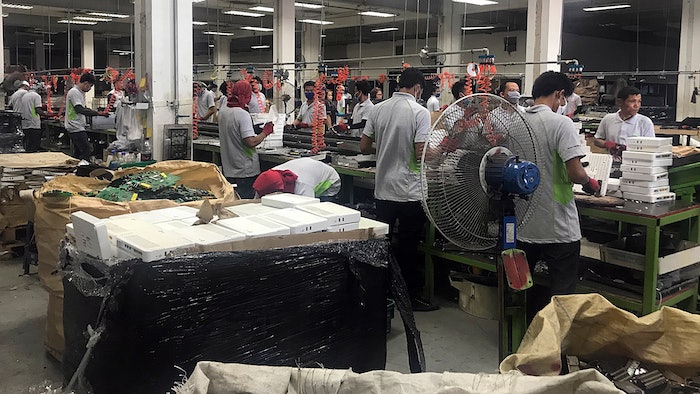 In this photo taken Thursday, May 24, 2018, and released by the Royal Thai Police, factory workers process electronic waste in Lat Krabang, outside Bangkok, Thailand. Police have raided several factories near Bangkok that allegedly were processing illegally imported electronic waste in a sign that China’s crackdown on waste recycling is pushing such operations offshore.
Royal Thai Police via AP

BANGKOK (AP) — Thai police have raided several factories near Bangkok that allegedly were using a loophole to illegally import and process electronic waste.

Police and industry ministry officials said Friday that they were still investigating after raids this week on at least four factories in industrial parks in the outskirts of the capital that found nearly 100 tons of electronic waste such as discarded computers, computer display screens, old mobile phones and other items.

"These factories have not received permission to operate and will be closed pending further investigation into the cases," said Weerakit Runthakithanarat, a ministry official in Chachoengsao province, which is adjacent to Bangkok.

He said another 10 factories were due to be inspected by June 15.

He said police were examining the companies' import permits and bringing in experts to determine what sorts of materials were being processed at the sites.

The police said in a statement that the factories that were raided this week were ordered to get all the waste stored outside indoors within a week. No charges had been filed yet.

Police were questioning managers of a Taiwan company about the how the factories, which were authorized only to handle domestic recycling, obtained such large quantities of foreign e-waste. The suspicion was that they used a legal loophole allowing imports of second-hand appliances.

"Thailand does have this loophole where it allows imports of electronic goods — for reuse purposes — when in fact they are mining materials from these old machines without any regard for the environmental and health impacts," Somnuck Jongmeewasin, a professor at Silapakorn University who has done research on hazardous waste disposal, told The Associated Press.

He said Thailand had eased restrictions on such waste processing and recycling plants last year to help cope with the domestic garbage and waste problem. Instead, some factories are using the opportunity to illegally process waste from overseas.

Somnuck said Thai authorities lack the capacity to adequately regulate such facilities. The police raids followed complaints from residents living near the factories over bad smells, overflowing waste and burning sensations on their skin.

"Factory owners have to give assurances to local communities that if there are impacts on environment, like water pollution, they will take preventive measures and be able to pay compensation for any damages," said Suwit Kumdee, governor of Chachoengsao.

For years, Chinese waste processors, often working in extremely hazardous conditions, have handled a huge share of the world's e-waste despite a ban on imports of such materials. A ban on other types of waste that took effect Jan. 1 has left many countries struggling over how to cope.

America's Recycling Industry is in the Dumps