Three other people, including a former StarKist tuna company executive, have previously been charged. 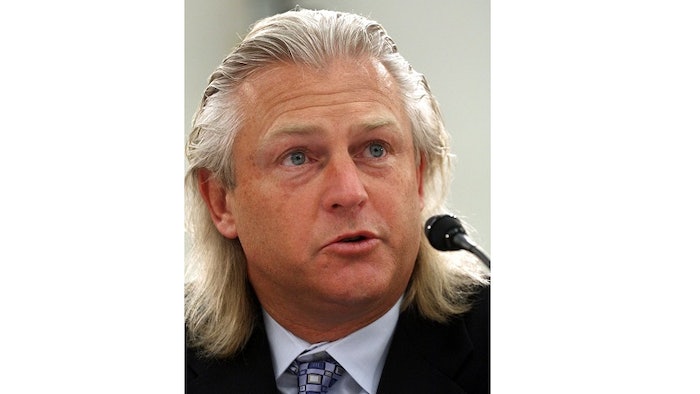 In this Feb. 26, 2008, file photo, Bumble Bee Foods President and CEO Christopher Lischewski testifies on Capitol Hill in Washington. U.S. prosecutors have filed a criminal charge in San Francisco against Lischewski as part of an investigation into price fixing in the packaged seafood industry. The Department of Justice announced Wednesday, May 16, 2018, that a grand jury indicted Lischewski on one count of price fixing. Prosecutors say Lischewski from November 2010 to December 2013 conspired with others in the industry to eliminate competition by setting prices for canned tuna.
AP Photo/Lauren Victoria Burke, File

SAN FRANCISCO (AP) — U.S. prosecutors filed a criminal charge Wednesday against the CEO of Bumble Bee Foods as part of an ongoing investigation into price fixing in the packaged seafood industry.

A grand jury in San Francisco indicted Christopher Lischewski on one count of price fixing, alleging that from November 2010 to December 2013 he conspired with others in the industry to eliminate competition by setting prices for canned tuna.

"American consumers deserve free enterprise, not fixed prices, so the department will not tolerate crimes like the one charged in today's indictment," Assistant Attorney General Makan Delrahim said in a statement announcing Lischewski's indictment.

Lischewski's attorney, John Keker, said his client has lived a hardworking and ethical life and is innocent.

"When the facts are known and the truth emerges, Mr. Lischewski will be found not guilty, and that vindication will rightfully restore his good name," Keker said in a statement.

The U.S. government began investigating price fixing of canned tuna between StarKist, Bumble Bee Foods and Chicken of the Sea more than two years ago.

Two other executives at Bumble Bee have pleaded guilty in the price-fixing scheme, and Bumble Bee Foods last year agreed to pay a $25 million fine after pleading guilty to price fixing.