One of the world's biggest names in dairy is scrambling to contain the damage. 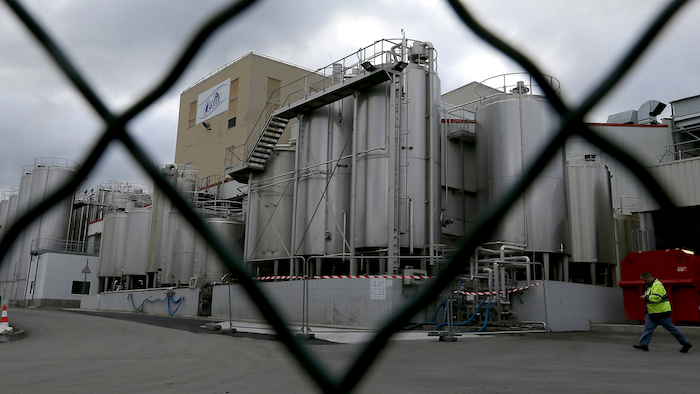 Pharmacies and supermarkets pulled cans and bottles of baby milk off shelves Thursday as the company — one of the world's biggest names in dairy — scrambled to contain the damage.

Lactalis had already recalled several million baby milk products earlier this month. On Thursday, the company expanded the recall to all products made in its factory in Craon in western France since February "as a precautionary measure."

In a statement, Lactalis apologized to customers and said investigations confirmed the outbreak began after renovation work earlier this year at the Craon site. Production has been halted at the site.

French health authorities have said 31 infants around France contracted salmonella in recent months within days of consuming baby milk made in Lactalis' factory at Craon. Sixteen were hospitalized but later released and are now doing fine, according to a statement from the government public health agency.

It is unclear whether children in other countries have also fallen ill.

Lactalis spokesman Michel Nalet told The Associated Press on Thursday that the newest recall affects about 30 countries but did not have a breakdown of which ones.

A French government list earlier this month said countries affected include Britain, Greece, China, Pakistan, Bangladesh, Saudi Arabia, Morocco, Sudan, Peru and Colombia. The United States is a major market for Lactalis but is not affected by the recall. The company has production sites in 47 countries, including the U.S.

The products affected include baby milks sold under the Picot, Milumel and Pepti brand names.

At the Pharmacie de L'Ourcq in the 19th arrondissement of northern Paris, employees emptied shelves and piled cans of milk into carts as warnings about the new recall spread around the country.

Merveille Gamimi, a customer at the pharmacy and mother of an infant son, expressed concern. "For big companies, (consumers) are numbers .... But for us — these are our lives, our everyday lives. When my child is sick, I don't sleep. I'm up the whole night. I worry. I search for solutions," she said.

Lactalis owns leading dairy brands including President and Galbani cheeses and Parmalat milk. A privately held, family-run company headquartered in Laval in western France, it has 75,000 employees in 85 countries and annual revenues of about 17 billion euros ($20 billion).