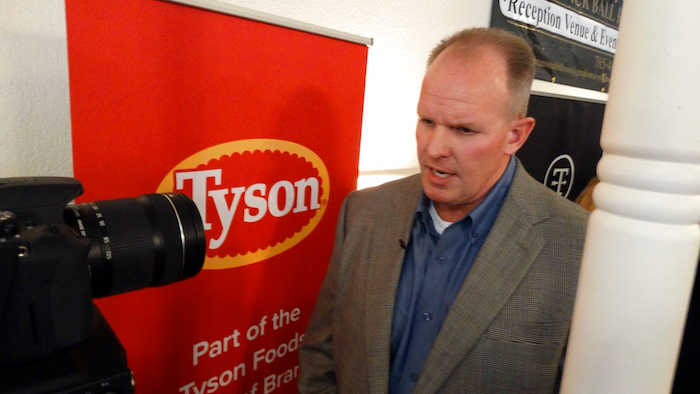 Doug Ramsey, group president of poultry for Tyson Foods Inc., answers questions from reporters about the company's plans to build a $320 million chicken-processing plant, Tuesday, Sept. 5, 2017, in Tonganoxie, Kan. The company expects the plant to employ 1,600 workers processing as many as 1.25 million birds per week.
Peter Hancock/The Journal-World via AP

TONGANOXIE, Kan. (AP) — Tyson Foods Inc. will invest $320 million in a new chicken-processing plant in northeastern Kansas employing 1,600 people so that it can keep up with a growing consumer demand for fresh poultry, the company and state officials announced Tuesday.

The Springdale, Arkansas-based meat producer unveiled its plans during a news conference in Tonganoxie with Gov. Sam Brownback and other state and local officials. The company plans to build the plant outside the town of around 5,300 residents about 30 miles (48 kilometers) west of Kansas City and expects it to be open in mid-2019.

Kansas offered the company a package of incentives "appropriate to a project of this size" to attract the plant, said Kevin Doel, a spokesman for the state Department of Commerce. He declined to provide details, noting that the department does not release such information until contracts with the state are signed.

"We certainly needed to bring something to the table," Doel said. "We were competing with other states."

But the announcement also attracted a small protest from a few local residents who suggested the company would provide low-wage jobs, the Lawrence Journal-World reported. Tyson said jobs would have starting wages of $13 to $15 an hour.

Stephanie Ventura and her husband relocated to Tonganoxie about three years ago from Emporia, where Tyson operates a beef-processing plant. She does not look forward to having Tyson move in.

"It stinks up the whole town," she said. "It's just not a wonderful way of life."

The company plans to buy a 300-acre site and also build a hatchery and feed mill. It expects to break ground on the project this fall.

"We believe this new operation, which will incorporate the latest production technology, will enable us to meet the sustained growth in consumer demand for fresh chicken," Tyson President and CEO Tom Hayes said in a statement.

The plant will be able to process 1.25 million birds a week, and the company plans to contract with local farmers. It and state and local officials project that the plant's payroll, payments to farmers and purchases of feed and utilities will total $150 million a year.

"The far-reaching impact of this development will be felt by farmers, ranchers, agribusinesses and communities throughout eastern Kansas," Brownback said in a statement.

Tyson already operates six plants in Kansas that employ about 5,700 workers and made more than $2 billion last year in payments to cattle and hog suppliers. The company employs about 114,000 workers total and is one of the world's largest food companies.

Doug Ramsey, the company's group president for poultry, said eastern Kansas is "the right location" for a new plant because of the availability of grain and labor and because the state has a "top-notch" transportation system.

The results are in: E-Commerce for Manufacturing 101 is a hit. View it on demand now to learn how to measure ecommerce success and how to make it work, even if you're a one-person marketing department. Watch it now.
Nov 30th, 2021