Showing just how blurry the lines are getting, PepsiCo launched a drink last week that it describes as "sorta juice, sorta soda, sorta sparkling water." 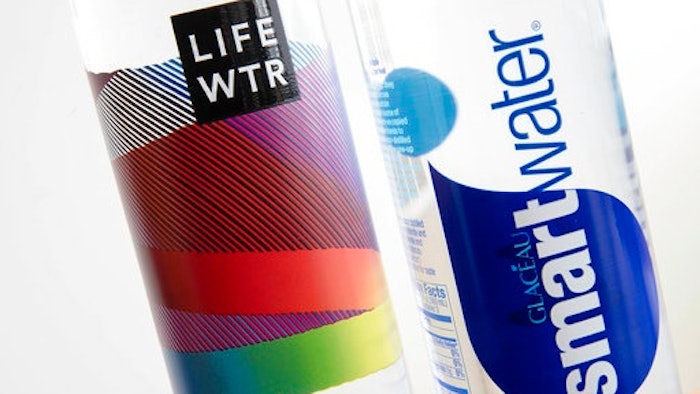 In this Thursday, March 16, 2017, photo, bottles of Lifewtr and Smartwater are displayed in Philadelphia. As bottled water surges in popularity, Coke, Pepsi and other companies are using celebrity endorsements, stylish packaging and fancy filtration processes like “reverse osmosis” to sell people on expanding variations of what comes out of the tap. They’re also adding flourishes like bubbles, flavors or sweeteners that can blur the lines between what is water and what is soda.
AP Photo/Matt Rourke

NEW YORK (AP) — Bottled water is starting to seem more like soda, and sometimes taste like it, too.

As bottled water surges in popularity, Coke, Pepsi and other companies are using celebrity endorsements, stylish packaging and fancy filtration processes like "reverse osmosis" to sell people on expanding variations of what comes out of the tap. They're also adding flourishes like bubbles, flavors or sweeteners that can blur the lines between what is water and what is soda.

For this year's Super Bowl, PepsiCo even ran an ad for its new Lifewtr, promoting the drink in a spotlight typically reserved for sodas. Also running their first Super Bowl ads were Fiji and Bai Brands, which sell "enhanced waters" made with fruit juice and stevia sweetener.

Michael Simon, Bai's chief marketing officer, says its drinks "give people that healthy profile they're looking for, but now they no longer have to sacrifice on taste with the neutrality of water."

Bottled water has been gaining ground for years, and overtook soda as the No. 1 drink in the U.S. by sales volume last year, industry tracker Beverage Marketing Corp. said. Some of the fizzy, sweetened drinks are considered water by the companies or industry trackers in some cases, as the distinctions between them lose meaning. Companies aren't as interested in the big, economy packs of plain bottled water that have been fueling the growth, says Ali Dibaj, a Bernstein analyst who covers the industry, since those are less profitable than sodas and are a "horrible business to be in."

So Coke and Pepsi are focusing on pricier options that compete with brands like Evian and Perrier. And they're introducing fizzy and fruity varieties to get a better foothold in increasingly crowded marketplace where options like LaCroix and others are gaining popularity. Showing just how blurry the lines are getting, PepsiCo launched a drink last week that it describes as "sorta juice, sorta soda, sorta sparkling water." Such options can capture people looking to cut back on sodas or juices, and may get people who might buy lower-priced waters to upgrade.

"You can get up the ladder in terms of water and get out of the categories that don't drive a lot of value," Coca-Cola's incoming CEO James Quincey said in September.

Quincey cites Smartwater, which has enjoyed sales growth in North America, as a way for Coke to profitably expand its water business. The brand is billed as "vapor distilled" and features actress Jennifer Aniston in its ads.

He also said that in the crowded Chinese market, Coke is upgrading people to a water brand it markets as "socially responsible" with a different blend of minerals, which costs twice as much.

Exactly what makes water seem like it's worth the extra money varies, but image is key.

PepsiCo had toyed with names like "Qua" and "Om" before settling on Lifewtr. The company points to the artwork featured on its bottles, and the "reverse osmosis" filtration the water undergoes, with electrolytes added for taste. "This is where consumers are heading," said Todd Kaplan, vice president of marketing at PepsiCo, about lower-calorie drinks like Lifewtr.

Both Lifewtr and Smartwater, which account for a small portion of the overall packaged water market, are made with municipal water and were selling for $2.79 for a 1-liter bottle at a 7-Eleven in New York City. The convenience store chain's private label brand was selling for $1.50 for the same size bottle.

The challenge for Coke and Pepsi is people like Andrew Allen. The New York City resident said he is trying to drink more water, but isn't loyal to a particular brand and buys whatever he can get a deal on.

"I just wanted to stop drinking soda — just give it up," Allen said.

Julie McKnight, who also lives in New York City, said the distinctions made by some bottled waters are not worth the extra price. "It doesn't seem any different," she said. Mostly, McKnight said uses reusable bottles that she fills with filtered tap water.

To help address people's concerns about the environment as well as paying for a variation of what they could get from the faucet, companies like Nestle have been "light weighting" the packaging to use less plastic and keep prices down.

In addition to the still, unflavored versions, Coke's Dasani and Pepsi's Aquafina have been rolling out sparkling and flavored extensions. Such options are making it trickier to define drinks that may be fizzy and sweet, yet marketed as water. Beverage Digest, another industry tracker, counts flavored sparkling varieties in its water category, as well as Sparkling Ice, which is made with artificial sweeteners.

"Someone could argue with a straight face that maybe those belong with (sodas)," executive editor Duane Stanford noted. But, he said, people drink Sparkling Ice with the "mindset" that it is water.