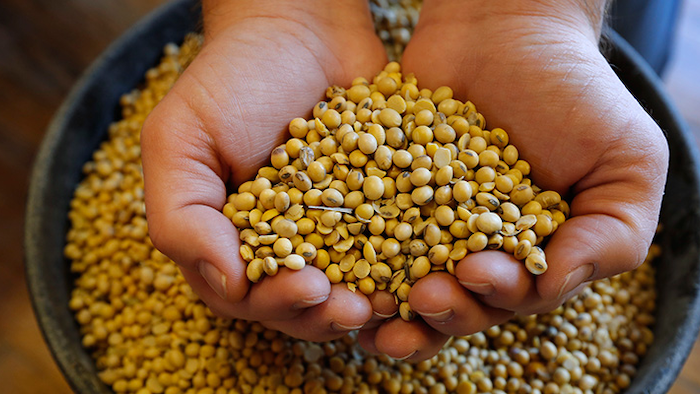 FILE - In this Nov. 21, 2018, file photo, Justin Roth holds a handful of soybeans at the Brooklyn Elevator in Brooklyn, Iowa. The government shutdown could complicate things for farmers lining up for federal payments to ease the burden of President Donald Trump’s trade war with China. The USDA last week assured farmers that direct payments would keep going out during the first week of the shutdown. But payments will soon be suspended for farmers who haven’t certified production. Farm loans and disaster assistance programs will also be on hold. (AP Photo/Charlie Neibergall, File)

Since December, when U.S. and China negotiators called a truce to tariffs and began signaling that an agreement might be reached, soybean farmers had been holding out hope that sales to China would resume, said Todd Hultman, an Omaha-based grain market analyst with agriculture market data provider DTN. In the meantime, the farmers had been storing a record stockpile of nearly 1 billion bushels.

The latest news of a new round of tariffs, with no agreement in sight, spooked the financial markets and some farmers who had been tentatively optimistic.

"This is hitting the market at a very emotionally distressful time," Hultman said. "The rug of hope was pulled out from under us and especially with the announcement this morning that China is going to retaliate with higher tariffs of their own."

In a statement Monday, the American Soybean Association reacted with frustration edged with anxiety.

"The sentiment out in farm country is getting grimmer by the day," said John Heisdorffer, a soybean farmer in Keota, Iowa, who is chairman of the ASA. "Our patience is waning, our finances are suffering and the stress from months of living with the consequences of these tariffs is mounting."

A slowdown in soybean sales, and the huge stockpiles that result, has a ripple effect. Farmers in many parts of the corn belt have suffered from a wet and cooler spring, which has prevented them from planting corn. Typically when it becomes too late to plant corn, farmers will instead plant soybeans, which can grow later into the fall before harvest is required. Yet now, planting soybeans with the overabundance already in bins and scant hope for sales to one of the biggest buyers in China, could raise the risk of a financial disaster.

"This is the fifth year of low prices, basically, for crops," Hultman said. "I think time is just wearing us out."

To Brent Gloy of Grant, Nebraska, many farmers like him appear to be facing only bleak alternatives for planting.

"There's just not a lot people can do," Gloy said. "You're looking at late corn planting through part of the corn belt. They would normally go to soybeans. Man it's just a mess."

On Monday, Trump told reporters that a new program to relieve U.S. farmers' pain is being devised and predicted that they will be "very happy." The administration last year handed farmers aid worth $11 billion to offset losses from trade conflicts.

Trump seemed to suggest that the aid will make up for, or partially cover, the $15 billion that he said represented "the biggest purchase that China has ever made with our farmers." In fact, U.S. farm exports to China approached $26 billion in both 2012 and 2013 and equaled $19.5 billion in 2017 — before his trade war began taking a toll on agricultural sales to China.

Gloy, an agriculture economist and a partner in the online research website Agriculture Economic Insights, said he fears there may be no end in sight to the Trump administration's trade dispute with China. And he noted that most crops that farmers could plant aren't profitable right now.

He also said that some fellow farmers he speaks with are beginning to sound notes of discontent with the Trump administration.

"Farmers I talk to, I've been surprised they're supportive as they are, but I think it's starting to wane," he said. "I've personally been very frustrated with it. I think it's just a lack of a coherent plan."

He said worries that the entire agriculture sector could face severe trouble if the dispute lasts indefinitely.

"It's going to get louder and louder because there's going to be severe financial distress in agriculture," he said. "We've been getting teaser deals for six months, and everybody kind of thought it's going to happen and now I just think the reality of the situation is that's not in the cards."