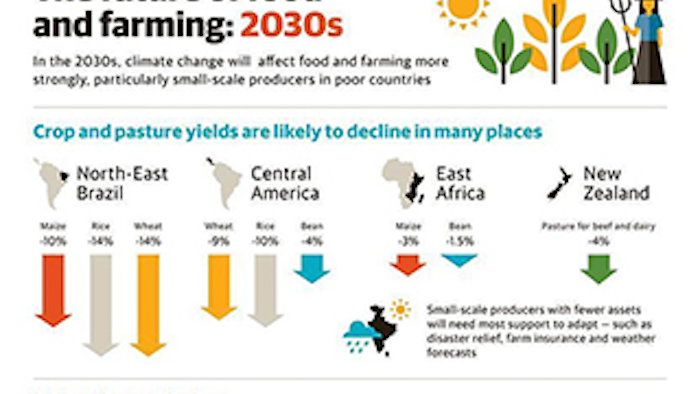 LONDON (CCAFS) — The influential Intergovernmental Panel on Climate Change (IPCC) report, released this week, concluded that climate change is already damaging food production and increasing food prices, and will have further impacts in the future. Responding to this, representatives from the research community, civil society, farmers organizations, donor agencies and private sector gathered on April 3 to identify actions the world must take to help farmers adapt to climate change and help deliver a more food-secure and prosperous world.

The meeting, which is organized by the CGIAR Research Program on Climate Change, Agriculture and Food Security (CCAFS), the International Fund for Agricultural Development (IFAD), the World Bank, global risk adviser Willis, the International Sustainability Unit, and the United Kingdom's Department for International Development (DFID), focused on the implications of the new IPCC report. The much-anticipated document raises fresh concerns for food security and farming, especially in tropical regions like South Asia and sub-Saharan Africa. The discussion also highlighted opportunities for adapting food systems to changing climates.

“The IPCC assessment shows that the threat to food security is not just a problem for the future, but something that is happening right now and demands immediate attention,” said Pramod Aggarwal, who leads adaption work in South Asia for CCAFS and is also a reviewer of the IPCC report. “The challenges are significant,” he added. “But options to adapt abound and innovation has always been a constant feature of agriculture.”

The IPCC report provides an unprecedented degree of scientific consensus about how the build-up of greenhouse gases from human activities is already affecting food and farming — and how those impacts could rapidly intensify over the next few decades. For example, the IPCC finds evidence that climate change is already linked to lower wheat and maize yields, diminished fish catches, spikes in food prices, and new levels of food insecurity among the world’s poorest people. And in the future, globally negative impacts will be more common, although food production in the high latitudes, such as in northern China and the United Kingdom, could in some cases benefit from climate change. The tropics appear particularly vulnerable.

The IPCC indicates that overall crop yields in Africa and South Asia could decline by eight percent by 2050 and yields from tropical fisheries could decline by as much as 40 percent. Yet during this same period, demand for food is expected to surge as diets change and populations rise in the developing world. In Africa, there will be twice as many people in 2050 as there are today. The population of Nigeria alone could soon reach 440 million, surpassing that of the United States

The IPCC report also shows there is a high risk that climate change could erode food security in Central America, Brazil and parts of the Andean region. But participants at the meeting will point to many options for adapting to climate stresses that can significantly lessen or even negate negative impacts. For example, just adopting an improved crop variety routinely provides more than a 20 percent boost in yields, suggesting the need for greater investments in crop gene banks and breeding programs.

Food production in vulnerable areas can remain viable, but investments in the appropriate agriculture innovations are needed now, because some of the most effective ways to deal with climate change, like more resilient crop varieties and livestock breeds, can take up to 20 years to develop.

“In the developing world, where 500 million smallholder farms are responsible for up to 80 percent of food production, it is critical that we act now by investing in practical solutions that strengthen the resilience of smallholder famers and improve the sustainability of their livelihoods,” said Michel Mordasini, Vice-President of IFAD, a specialized UN agency investing in rural people.

The good news is that the latest IPCC assessment provides policymakers with the scientific consensus and evidence needed to justify greater investments in adaptation, especially in developing countries.

“Those living in poverty are most at risk,” said Lynne Featherstone, the UK’s Parliamentary Under Secretary of State for International Development. “Helping people in poor countries adapt to these challenges is vital if we are to minimize the impacts of climate change and sustain economic growth.”

Many countries are pioneering a wide range of climate-related agriculture adaptation efforts that can become models for interventions elsewhere. These innovative initiatives can be found across the developing world. For example:

“Our growing consensus on the impact of climate change on food security should accelerate the expansion of proven adaptation strategies and new programs,” said Sonja Vermeulen, Head of Research for the CCAFS program, whose analysis of the IPCC’s findings was published today. “We need to see an increase in public investments, and also a more creative use of private capital and insurance products that can help farmers and vulnerable communities prepare for a future that is likely to feature more frequent encounters with weather extremes.”

There is great need for adaption efforts that look beyond the farm gate to address other aspects of food security that face climate risks, such as crop storage, transportation and markets. The menu of adaptation options should also include the possibility of significant shifts in food production. For example, climate change could require farmers to start cultivating entirely different, more “climate-friendly” crops, such as cassava, or to relocate to areas with more accommodating conditions.

The CGIAR Research Program on Climate Change, Agriculture and Food Security (CCAFS) is a strategic partnership of CGIAR and Future Earth, led by the International Center for Tropical Agriculture (CIAT). CCAFS brings together the world’s best researchers in agricultural science, development research, climate science and earth system science, to identify and address the most important interactions, synergies and tradeoffs between climate change, agriculture and food security. www.ccafs.cgiar.org