A Food and Drug Administration investigation into the safety of caffeine-added foods has prompted Wrigley to take its new caffeinated gum off the market for the time being. Wrigley said Wednesday that it will temporarily halt sales and marketing of Alert caffeinated gum after discussions with the FDA. 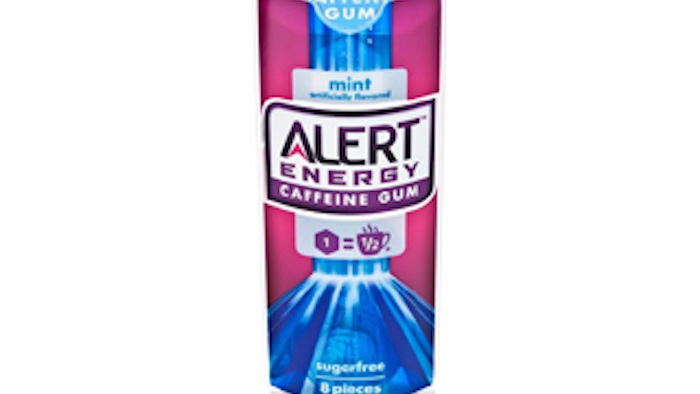 WASHINGTON (AP) — A Food and Drug Administration investigation into the safety of caffeine-added foods has prompted Wrigley to take its new caffeinated gum off the market for the time being.

Wrigley said Wednesday that it will temporarily halt sales and marketing of Alert caffeinated gum after discussions with the FDA. President Casey Keller said the company made the move "out of respect" for the agency, which said it would investigate the health effects of added caffeine on children and adolescents just as Wrigley rolled out Alert late last month. A stick of the gum has an amount of caffeine equivalent to half a cup of coffee.

"After discussions with the FDA, we have a greater appreciation for its concern about the proliferation of caffeine in the nation's food supply," Keller said in a statement to The Associated Press. "There is a need for changes in the regulatory framework to better guide the consumers and the industry about the appropriate level and use of caffeinated products."

Keller said the company has paused production and sales of the gum to give the agency time to regulate the caffeine-added products.

"We hope others in the food industry will exercise similar restraint," Taylor said.

Food manufacturers have added caffeine to candy, nuts and other snack foods in recent years. Jelly Belly "Extreme Sport Beans," for example, have 50 milligrams of caffeine in each 100-calorie pack, while Arma Energy Snx markets trail mix, chips and other products that have caffeine.

The companies say they are marketing the products to adults, but critics say that's not enough when the caffeine is added to items like candy that are attractive to children. Many of the energy foods are promoted with social media campaigns, another way they could be targeted to young people.

Major medical associations have warned that too much caffeine can be dangerous for children, who have less ability to process the stimulant than adults. The American Academy of Pediatrics says it has been linked to harmful effects on young people's developing neurologic and cardiovascular systems.

Taylor said last week that the proliferation of new foods with caffeine added — especially the gum, which he equated to "four cups of coffee in your pocket" — may even prompt the FDA to look closer at the way all food ingredients are regulated. The agency is already investigating the safety of energy drinks and energy shots, prompted by consumer reports of illness and death.

The only time FDA has explicitly approved the added use of caffeine in a food or drink was in the 1950s for colas. Taylor said the current proliferation of caffeine added to foods is "beyond anything FDA envisioned."

The FDA said it would look at the potential impact these new and easy sources of caffeine will have on children's health and take action if necessary. Taylor said he and other FDA officials have held meetings with some of the large food companies that have ventured into caffeinated products, including Mars Inc., Wrigley's parent company.