ROCHESTER, Mass. (AP) — All is not well in cranberry country this harvesting season, the 200th anniversary of the world's first known commercial cultivation. In the birthplace of the industry, many Massachusetts growers whose families have tended bogs for generations are in "dire straits," facing... 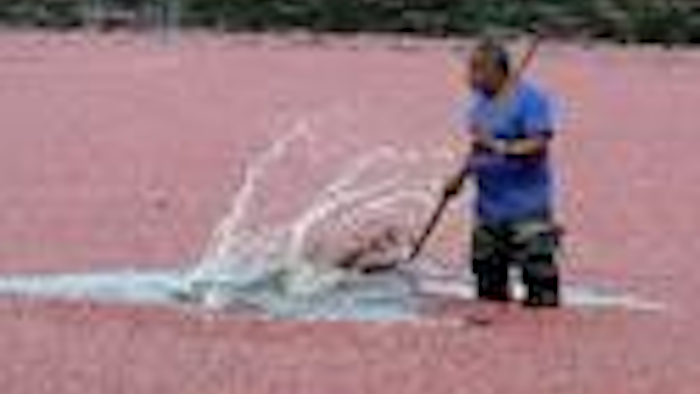 ROCHESTER, Mass. (AP) — All is not well in cranberry country this harvesting season, the 200th anniversary of the world's first known commercial cultivation.

In the birthplace of the industry, many Massachusetts growers whose families have tended bogs for generations are in "dire straits," facing challenges that include rising production costs, decreasing crop values, changing consumer habits and increasing competition from other states and Canada, a recent task force report found.

In addition, one of the region's worst droughts in decades threatens to leave farms without enough water to flood bogs for harvest.

"It's been a real losing proposition for a small grower such as myself," said Eugene Cobb, whose 25 acres in Carver are down from the 31 he took over from his father in 1980. He said he has had two good years in the past 16.

Cranberries grow on vines and are typically wet-harvested by farmers who flood the dry bogs with water. Revolutionary War veteran Henry Hall is credited with starting commercial cranberry production on Cape Cod in 1816. By then, cranberries already had a long history in a region where soil conditions and climate are just right for the tart little fruit to flourish.

Native Americans probably showed the Pilgrims how to use cranberries for food or dye. Evidence suggests an early recipe for cranberry sauce by the late 1600s. Barrels of the fruits, rich in vitamin C, traveled aboard whaling ships to help ward off scurvy.

But Wisconsin surpassed the state as the biggest producer in the mid-1990s. More recently, Massachusetts slipped to third place in North America behind Quebec, where growers have benefited from government subsidies.

"You see demand of about 8 or 9 million barrels, and this year I think our industry is projected to produce 13 million barrels," said Matt Beaton, an Ivy League-educated, fifth-generation cranberry grower. "The handwriting is on the wall. You don't have to be a math major to see what's going on."

Clouds spit a few morning sprinkles before giving way to hot sun on the first day of harvesting recently at Beaton's 330-acre farm in Rochester. Two large, three-wheeled water harvesters appeared to glide along the flooded bog as they separated cranberries from the vines. The fruit floated to the surface, turning the bog a dark pink.

This bog produces one of several new varieties developed through cross-breeding in recent years. The plump berries are 2 to 2½ times larger than their native ancestors, Beaton said, and are better suited for dried cranberry products — think Ocean Spray's Craisins — that are gaining market share while sales of juice and sauce have leveled off.

Over the past eight years, he estimated, he spent $1 million of his own money and borrowing an additional $3 million to renovate his bogs so they could produce the larger berries. But smaller growers without such resources are fighting for survival.

Brian Wick, executive director of the Cape Cod Cranberry Growers Association, calls it a "catch-22" — farmers need to renovate their aging bogs to stay competitive, but lack the money to do so.

While 93 percent of cranberry bogs in Wisconsin have been retooled to handle the newer varieties, Wick said, the number is only about 50 percent in Massachusetts, which has the lowest yield per acre of any major growing state.

Growers who pay into the cooperative, like Beaton, receive a share of profits from Ocean Spray, and in general have fared better than independent growers in the region. The company is not currently accepting new members.

Tax credits and loan guarantees to encourage bog renovation are among recommendations from the task force, but recognizing that many growers will simply be forced to shut down in coming years, the group also outlined an exit strategy that would compensate farms for converting bogs into protected wetlands.

"It's a thought every day whether I should exit or not," said Steve Ward, a cranberry grower. "But my gut feeling is that if you take a bog out of production, it's never coming back. I want to keep that bog for the next generation."