The company needed a solution that meshed with the current equipment design and unique production environment. 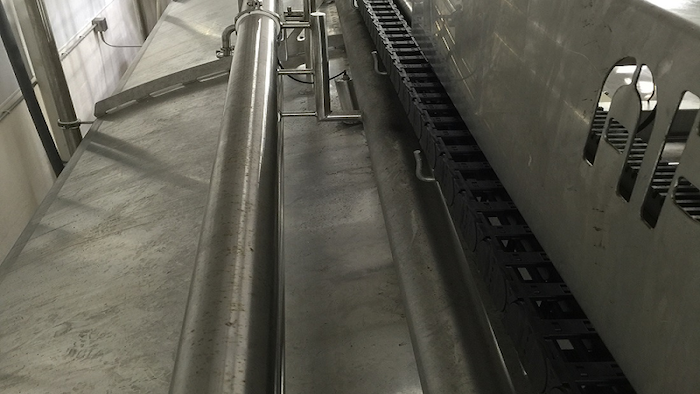 Cheese manufacturers in the United States produce more than five million tons every year, with Americans eating an average of 35 pounds per year that results in nearly$15 billion in annual sales. Any way you slice it, that’s a lot of dough for one of the nation’s favorite foods.

Like any industry, however, cheese manufacturers are susceptible to production downtime due to the breakdown of mechanical equipment. This is precisely what happened at an Iowa creamery when a stainless steel chain failed after just one year. “It was a tremendous burden for the plant,’’ said Tom Russell, the vice president for Advanced Process Technologies. The Minnesota manufacturer had provided the finishing vat for the cheese company, which was in the process of replacing aging capital equipment and looking toward future expansion.

"The window for installation was small since we were working around a 24/7 production schedule,’’ Russell said. “We had been working for about six months on a retrofit solution.” Within 48 hours after Russell received the news that the steel chain had quit for good, a replacement chain was delivered. In another 24 hours, a plastic energy chain from igus was installed, and the business was back up and running. “I was pleasantly surprised at how fast the solution went into motion,’’ Russell said. “I almost couldn’t get down to Iowa fast enough to see it installed.”

The chain in the application handled the carriage of an enclosed finishing vat, which takes cheese curd and whey slurry from a cheese vat, removes whey, salts the cheese, and blows the curd to a packaging room for bulk filling.

The system at the creamery includes six cheese vats and four finishing vats, along with clean-in-place systems and whey pretreatment. The carriage within the enclosed vat has a traverse, 480 VAC gear motors for stirring, and sensors for positioning. APT designs and manufactures dairy and food processing equipment, and the unit delivered to the Iowa creamery was the first of its kind.

Inside of a year, however, the chain started to fail. Russell and APT had already been working on a solution for several months when the stainless steel chain failed for the final time. “I can’t say exactly why the chain failed,’’ Russell said. “Over time, it started to sag and there was no ability in the design to tighten it. We were surprised that in less than a year, the stainless steel chains weren’t working properly.”

Russell had been seeking a solution with Charles Jaskolka, a territory sales manager for igus, a Germany-based manufacturer of motion plastics that runs its North American operations out of Providence, R.I. “He had been having some issues, and he reached out to us and we gave him pricing on some comparable products,’’ Jaskolka said. “Then I got the message that the chain malfunctioned. We got what he needed specified, and we were able to get it to him the next day.”

igus delivered four 13' E4.42 energy chains, one for each of the four finishing vats. The system runs the carriage and stirrer back and forth on top of the finishing vat on a 24/7 schedule. The igus e-chain is used primarily in long-term applications in moist environments. It is ideal for long travel lengths and also works well in free-hanging, side-mounted applications. It is designed for quick assembly, and can be fitted for travel lengths as far as 656'.

“The most important features for us were that the chain fit inside the existing design window and was projected to offer many years of service,’’ Russell said. “Being that this was the first of these machines we had put on the market, it was critical the solution was robust and would not fail again.”

Like all of igus’ products, the energy chain does not require lubrication or maintenance. The chain also had to resist the cheese manufacturer’s cleaning solutions. “It’s positioned off to the side, so we were not concerned about food contact,’’ Jaskolka said. “We had to worry about the chemicals used to clean and disinfect. We have not had any problems since the chain was installed.”

Russell said he was concerned the creamery, which has been in business for more than 100 years, would be dramatically impacted if a solution had not been found rapidly. He waited eight weeks to get the original energy chain, and replacing the broken steel chain with a similar model might have required 4-6 weeks. “This was a real problem for the plant,’’ Russell said. “It had to slow production, and they really needed that fourth vat to be operational.”

With the new plastic chain in place, production resumed quickly, helping the business put cheese back on the table for hordes of hungry consumers.

Dan Thompson is the Product Manager for igus energy chain® systems in Providence, R.I. He can be reached at dthompson@igus.net. Find out more about using igus energy chains on the company’s Tech Talk page.

Jar of 'Most Ancient' Cheese