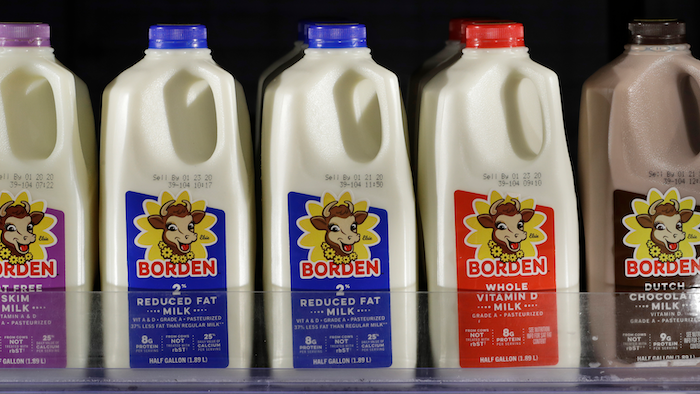 Elsie the cow has a new home.

Borden dairy, which filed for bankruptcy protection in January, has been sold to two private equity firms.

Dallas-based Borden said Friday it was sold for about $340 million to Capitol Peak Partners and KKR. Colorado-based Capitol Peak will be the majority owner while New York-based KKR will be a minority investor.

Borden’s 12 U.S. plants — which produce 500 million gallons of milk per year — will remain open and its 3,300 workers will keep their jobs, the company said. Borden CEO Tony Sarsam will step down when the sale is completed, and Capitol Peak and KKR will appoint a new board of directors.

There was no word, however, on the fate of Elsie, the smiling cow that has been Borden’s mascot since 1936.

The sale is expected to be wrapped up in mid-July.

Borden, founded in 1857, has been hammered by changing American tastes. Milk consumption is down as U.S. refrigerators are increasingly stocked with juice, soda and milk substitutes made from soy or almonds. Liquid milk consumption in the U.S. has tumbled more than 40% since 1975.

Dean Foods, which is also based in Dallas and is the nation’s largest milk producer, filed for bankruptcy protection in November. It sold nearly all of its assets to the Dairy Farmers of America in a transaction completed last month.