The dairy giant has suspended all investment projects in Russia, but will continue selling products in the country.

France-based dairy products giant Danone said Sunday that it will close operations at one of its two factories in Ukraine amid Russia's ongoing invasion there, but the company will continue to sell products in Russia.

In a March 6 website post, Danone said its other Ukraine plant was previously closed but has managed to resume operations.

"We have decided to suspend all investment projects in Russia, but currently maintain our production and distribution of fresh dairy products and infant nutrition, to still meet the essential food needs of the local population," the statement read, according to Reuters.

The news outlet followed by reporting that Danone shared fell by 3% on March 7.

New Danone CEO Antoine de Saint-Affrique was one of a group of French business executives who met with France president Emmanuel Macron on March 4 to discuss the Russia-Ukraine situation. 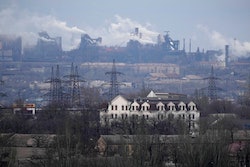