The group's Food For Good program hopes to feed 50 million people by 2030. 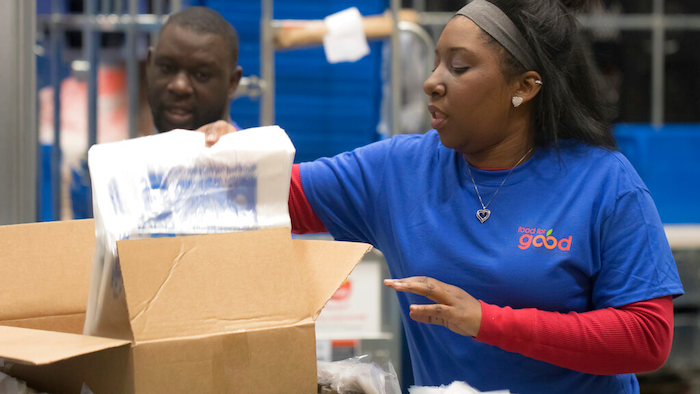 In this 2018 photo provided by Holt Haynsworth, Portia Thomas packs boxes at the Food For Good Warehouse in Austin, Texas.
Holt Haynsworth via AP

At the start of the pandemic, the need for the food that Jaron Barganier’s nonprofit provides to children throughout Texas exploded.

Not only did many children lose the free breakfasts and lunches they had normally received at their schools, which were closed because of the COVID-19 outbreak. What's more, Barganier’s nonprofit, Be a Champion, lost its access to those schools — and, more important to the food supplies, their refrigerators and freezers — as distribution hubs.

With demand having more than tripled to about 100,000 meals a day, Barganier turned for help to The PepsiCo Foundation’s Food for Good.

“They basically created a way for us to serve our kids outside,” said Barganier, Be a Champion’s CEO. “When they learned some of these families don’t even have access to refrigeration at home, they created a shelf-stable menu of products.”

The PepsiCo Foundation says that as it built out its Food For Good program across America, it focused on addressing individual communities’ needs. And it plans to continue that focus as it expands Food For Good around the world, hoping to feed 50 million people by 2030.

Jon Banner, president of the PepsiCo Foundation and executive vice president of PepsiCo global communications, said the company and its philanthropic arm want to combat the world’s hunger crisis, which was severely exacerbated by the pandemic.

“Roughly 800 million people around the world suffer from hunger,” Banner said. “It’s a tragedy that doesn’t need to happen. We had made so much progress, but I think, in one year, the pandemic has set us back 15 years.”

The PepsiCo Foundation has pledged $100 million in new food security initiatives and sustainable agriculture development by 2030. It has also expanded its work with the United Nations World Food Programme, pledging additional money to create a multi-country partnership in the Middle East and North Africa to secure food for communities affected by climate change.

Like a growing number of corporations, PepsiCo plans to offer its business knowhow to nonprofits around the world, in addition to its money. Banner said PepsiCo’s agronomists and supply chain experts work with farmers around the world to try to increase their crop yields and make them more sustainable, which benefits both the businesses and the communities.

The leveraging of PepsiCo business knowledge for its foundation’s nonprofit partners will continue both in the United States and internationally.

Silvia Cruz-Vargas, The PepsiCo Foundation’s director of international programs, said the organization has similar goals in all its markets.

“We talk about access to food security, access to water and access to economic opportunity as our three main pillars,” she said. “One goes hand-in-hand with the other ones when you are able to cover the most basic needs of those communities in which we live and work.”

“It doesn’t mean that we are going to copy and paste a solution that is particularly relevant in North America in countries where that may not be applicable,” she said. “We have an outstanding network of local partners that are embedded within the fabric of the communities in which we operate.”

Be a Champion’s Barganier said Food For Good’s operational help has already directed his nonprofit to expand to new areas.

Founded in 2001 to help underprivileged youth in the Houston area, Be a Champion started with in-school tutoring and afterschool programs, as well as college outreach to introduce teenagers to university campus life. The nonprofit expanded into the distribution of food to the students once it realized how many of them weren't getting enough to eat. That led to its partnership with PepsiCo’s Food for Good in 2015 and helped Be a Champion grow into Texas’ second-largest nonprofit meal provider, offering millions of meals each year.

With the help of Food for Good, Barganier hopes to bring food to more communities in the Rio Grande Valley, as well as East Texas. But he is also looking forward to seeing the program expand around the world to help others.

“They’re going to do very well globally because they have the ability to adapt,” Barganier said.