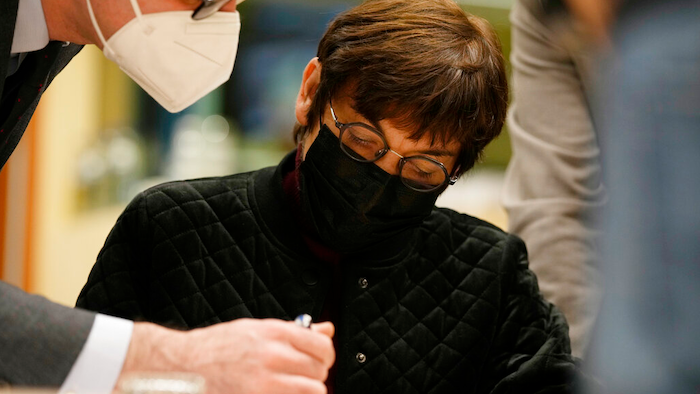 French Minister for the Sea Annick Girardin, center, signs papers during a meeting of EU agriculture ministers at the European Council building in Brussels on Dec. 13, 2021.
AP Photo/Virginia Mayo

BRUSSELS (AP) — European Union nations on Tuesday set fish catch quotas for next year in an attempt to protect fragile stocks and fishing fleets at the same time — leaving environmentalists claiming they will protect neither.

The traditional year-end bartering session between EU coastal nations to secure as many catch rights for their fishers for next year again often clashed with the advice of scientists to contain overfishing.

Even though some catches were reduced to safeguard the survival of species — like the one-third cut of sole totals in the Gulf of Biscay and some bans on targeted cod fishing — others were kept to guarantee the survival of threatening fishing communities.

The compromise result, said Slovene minister Joze Potgorsek who chaired the talks, “will allow us to maintain fish stocks at sustainable levels while also protecting the livelihoods of European fishing fleets.”

Environmentalists decried, however, that economic profit for the industry was at the cost of ocean sustainability and complained that some nations made no qualms about hiding their economic goals.

The EU had agreed to end overfishing and remain within stricter limits by 2020, but enforcing it has been problematic.

The Oceana environmental group said Tuesday's result allows for “the continuation of overfishing for a third of catch limits in 2022.”

For decades, the EU allowed fishing to drive several iconic species to the brink of commercial extinction before efforts over the past 10 years have seen a gradual recovery. Environmental groups say that this effort needs to be sustained before the seas off the EU will be restored to a natural balance.

They said EU ministers failed to grasp that. “Ending overfishing and ensuring abundant fish populations is in the interest of fishers, and these narrow-minded decisions will only jeopardize the health of our ocean, our planetary support system, and with it, the fishing industry,” said Andrea Ripol of Seas At Risk.