The number of Chinese-flagged vessels lurking just outside Peru’s waters has surged from 54 active vessels in 2009 to 557 in 2020. 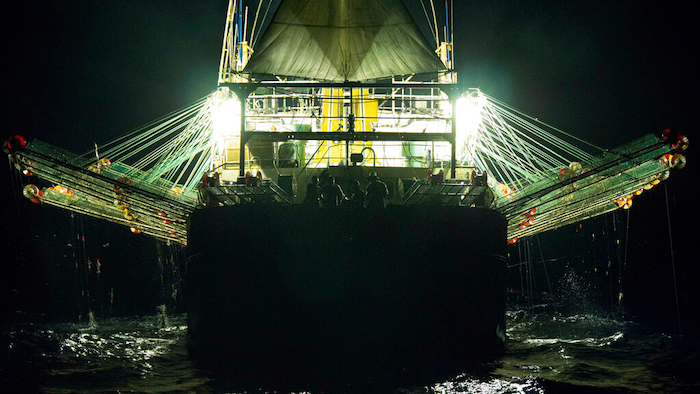 In this July 2021 photo provided by Sea Shepherd, a Chinese-flagged ship fishes for squid at night on the high seas off the west coast of South America.
Isaac Haslam/Sea Shepherd via AP

ABOARD THE OCEAN WARRIOR in the eastern Pacific Ocean (AP) — José López proudly remembers his first catch: he was 13 and a local skipper, pitying his ragamuffin look, hired him as an extra hand. When he returned home, his pockets stuffed with a day’s wages, his mother protested.

“She thought I had stolen the money,” López recalls between boisterous greetings to younger comrades who know him simply as “Pépe.” “I had to take to her to the fisherman so she would believe me.”

Since then, fishing has been a way of life for López and dozens of other artisanal fishermen in Pucusana, a port carved from the barren, desert-like hills south of Peru’s capital. For years the fleet thrived, earning López enough to buy a few boats and send his kids to college.

But a decade ago the tuna that he once effortlessly fished started to vanish. So, the fishermen turned their brightly colored boats bearing the names of Roman Catholic icons to squid.

The number of Chinese-flagged vessels lurking just outside Peru’s waters has surged from 54 active vessels in 2009 to 557 in 2020, according to the South Pacific Regional Fisheries Management Organization, or SPRFMO, an inter-governmental group charged with ensuring the sustainable fishing of squid. Meanwhile, the size of the Chinese catch has grown from 70,000 tons in 2009 to 358,000.

This story is a joint project between The Associated Press and Spanish-language broadcaster Univision.

The Chinese fishing takes place on the high seas — beyond the reach of any nation’s jurisdiction — and at night when lights so powerful they can be seen from space are used to attract swarms of the fast-flying squid.

“It really is like the Wild West out there,” said Captain Peter Hammarstedt, director of campaigns for Sea Shepherd, an ocean conservation group. “Nobody is responsible for enforcement.”

The Associated Press with Spanish-language broadcaster Univision accompanied Sea Shepherd this summer on an 18-day voyage aboard one of its vessels to observe up close the Chinese fleet on the high seas off the west coast of South America.

The patrol was prompted by an outcry last summer when hundreds of Chinese vessels were discovered fishing near the Galapagos Islands, a UNESCO world heritage site.

Launched in the 1980s as a response to depleting fish stocks at home and the need to feed its fast-growing population, China’s distant water fishing fleet has evolved into a thriving industry and a part of the country’s geopolitical push to secure access to the world’s dwindling natural resources.

“China doesn’t do anything that Europe has not done exactly the same way,” said Daniel Pauly, a prominent marine biologist at the University of British Columbia. “The difference is that everything China does is big, so you see it.”

The vast majority of the 30 vessels observed by the AP have a history of labor abuse accusations, past convictions for illegal fishing or showed signs of possibly violating maritime law. Collectively, these issues underscore how the open ocean around the Americas — where the U.S. has long dominated, and China is now jockeying for influence — have become a magnet for the seafood industry’s worst offenders.

One vessel, the Fu Yuan Yu 7880, is operated by an affiliate of a Nasdaq-traded company, Pingtan Marine Enterprise, whose Chinese executives had their U.S. visas cancelled for alleged links to human trafficking. The company has faced also accusations of illegal fishing and forced labor around the world. Pingtan declined comment.

The Humboldt squid — named for the nutrient-rich current found off the southwest coast of South America — is one of the most abundant marine species. Some scientists believe it may even be thriving as the oceans warm and its predators, sharks and tuna, are fished out of existence.

But experts point to past disappearance of squid stocks elsewhere as cause for concern even if it’s unknown how many Humboldt squid remain.

“If you have a vast resource and it’s easy to take, then it’s easy to fall into the trap of thinking that this is limitless,” said William Gilly, a Stanford University marine biologist who has spent decades studying squid.

Seafood companies in the U.S. have started to take note of the risks posed by China’s expansion and are seeking to leverage their market power to bring more transparency to the sourcing of squid. China is responsible for around half of the $314 million in squid that the U.S. imported in 2019, the bulk served up as fried calamari in restaurants.

One alternative is to deploy technology, like publicly available tracking data, to allow consumers to eventually identify the very vessel that caught the fish.

However, boosting transparency is a challenge the industry has grappled with for decades.

To address concerns, several South American governments have proposed a number of conservation measures including banning transshipments at sea and boosting the number of observers on ships to document catch sizes and violations.

But China has opposed each proposal.

“China doesn’t really seem interested in expanding protection,” said Tabitha Mallory, a China scholar at the University of Washington who specializes in the country’s fishing policies. “They follow the letter of the law but not the spirit.”

In the absence of stricter controls, López and his cohorts have to venture farther from home and spend as much as a week at sea to haul in what they used to catch in a single day. That’s if they return at all: in June three fishermen set out never to be seen again.

Adding to the fishermen’s frustrations is Peru’s logistical support for the Chinese fleet — their direct competitors. Since 2019, 212 Chinese fishing vessels have entered Peruvian ports for repairs, crew changes and to restock supplies, according to Peru’s government.

“There’s no maritime authority that defends us,” complains López, who says he’s lost count of how many times he’s notified authorities of Chinese vessels fishing inside Peru’s waters. “I don’t know what power the foreigner has that they come to my home and do what they want.”

The agency says the extra funding is timed to ensure the purchasing power of schools keeps pace with the cost of living.
Jan 7th, 2022
Follow Us
Most Recent