It's the second time in a span of a year that the company has slashed distributor prices.

REDWOOD CITY, CA — Thanks to continued production records, Impossible Foods is kicking off the new year by cutting prices on its open-coded products globally for foodservice distributors who sell to restaurants.

Impossible Foods is lowering prices on average by approximately 15% on its open-coded foodservice products in the United States, including its quarter-pound (4 oz) and third-pound (5.33 oz) Impossible Burger patties, versatile 5-pound Impossible Burger bulk packages, and Impossible Sausage Made From Plants patties.

Impossible Foods is also lowering prices for distributors in Canada, Singapore, Hong Kong and Macau. The double-digit international price cuts, which vary by location and begin rolling out this month, apply to all Impossible foodservice products sold overseas.

Impossible Foods’ second domestic price cut in the last year comes amid record global demand for Impossible Burger, which tastes like beef and is hailed as a triumph of food engineering. Impossible Sausage debuted a year ago; within six months, the savory patties were available at more than 20,000 locations throughout the United States.

Demand for Impossible products continues to skyrocket — even as the food tech startup continues to achieve new production records at its manufacturing facility in Oakland, Calif. Production has increased sixfold since 2019, both in Oakland and at multiple plants owned by co-manufacturing partners.

The company’s hypergrowth has profound implications for the environment and enables Impossible Foods to achieve economies of scale — cost savings that Impossible Foods plans to keep passing along to business owners and consumers.

“Our stated goal since Impossible Foods’ founding has always been to drive down prices through economies of scale, reach price parity and then undercut the price of conventional ground beef from cows,” said Impossible Foods CEO and Founder Dr. Patrick O. Brown. “Less than a year ago, we cut foodservice prices by 15%. Today’s price cut is just the latest -- not the last -- step toward making the food system sustainable. Stay tuned.”

To order Impossible Foods’ current U.S. foodservice products, retailers can contact their local distributors or email us at hello@impossiblefoods.com. To find Impossible products at a restaurant near you, click here.

Similar to Impossible Foods’ initial price cut in March, the company is again asking its distributors to pass along the savings to hardworking restaurateurs, who can then lower prices for their customers as well.

Like many food companies, Impossible Foods does not typically own or operate the final point of sale for its products — grocery stores, restaurants, cafeterias, theme parks and other venues. Instead, Impossible Foods sells most of its foodservice products in the United States directly to redistributor DOT Foods, which operates multiple warehouses; DOT Foods in turns sells to numerous food distributors (such as US Foods, Sysco and many others). Those distributors determine the prices that restaurants pay, and the restaurants in turn determine the final menu price for consumers.

“While we couldn’t and wouldn’t determine pricing for independent third parties, we sincerely hope our food distributor colleagues pass along this price cut to hard-working restaurateurs and their customers in this unprecedented time of need,” said Impossible Foods President Dennis Woodside, who oversees numerous functions including sales. “As unemployment remains stubbornly high and the effects of COVID-19 continue to ravage the economy, it’s imperative to provide affordable, delicious and sustainable food to restaurants and the public.” 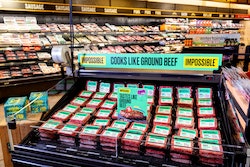