Demonstrators are worried the agreement will relax rules for food imports from the U.S. 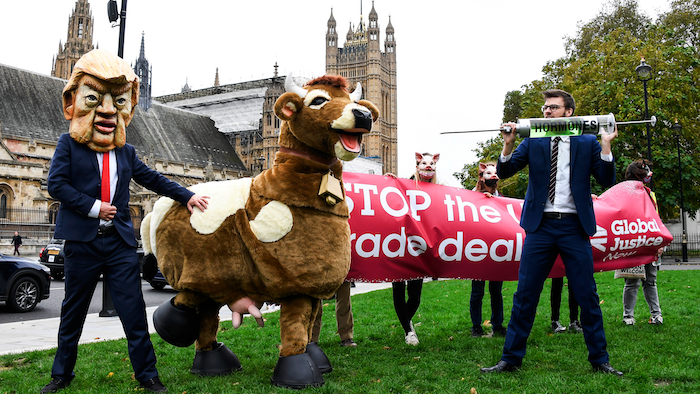 A man imitates the injection of hormones into a man in a cow costume in Parliament Square, as part of a day of action against the US trade deal, in London on Saturday, Oct. 24.
AP Photo/Alberto Pezzali

Some 50 people assembled near the Houses of Parliament to protest the ongoing negotiations for the trade deal, which the U.K. government is counting on to cushion the impact of Britain’s departure from the European Union. Demonstrators are worried the agreement will relax rules for food imports from the U.S.

One protester wore an oversized Trump head and carried a giant syringe to highlight concerns that beef treated with hormones could be sold in the U.K. Critics are also worried about the importation of chickens washed in chlorine, a practice they suggest covers up poor animal husbandry practices.

Another demonstrator dressed as a cow named Daisy. Asked whether she was uneasy about the possible lowering of food standards, she nodded and said: “Moo.’’