China is investigating whether Australia is exporting wine at improperly low prices. 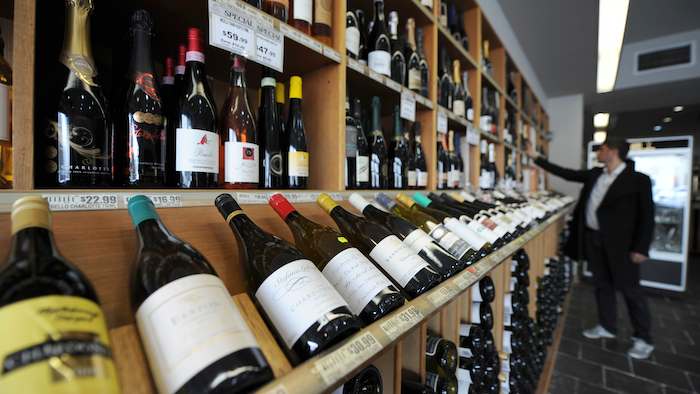 In this 2012 file photo, a shopper looks over the wine at King & Godfree, one of Australia's oldest licensed grocery stores in, Melbourne, Australia.
AP Photo/Mal Fairclough, FILE

CANBERRA, Australia (AP) — China on Tuesday launched an investigation into whether Australia is exporting wine at improperly low prices in a new dispute between major trading partners that could reduce access to the biggest market for Australian vintners.

The anti-dumping investigation focuses on wine in containers 2 liters (68 fluid ounces) or smaller, which accounts for most Australian exports, the Chinese Ministry for Commerce said. It said the probe was prompted by a complaint from Chinese wine producers in July, but gave no details.

“We do find this deeply troubling, concerning and perplexing given Australia’s wine industry is not subsidized to export and it’s certainly not dumping product on the world market,” Trade Minister Simon Birmingham said. “Now it’s for China and Beijing to explain the rationale behind these actions and why they have moved to that stage of an investigation.”

A separate anti-dumping investigation closed the Chinese market to Australian barley in May through crippling tariffs after Australia supported calls for an investigation into the origins of the coronavirus pandemic. Beijing also blocked imports of beef from Australia's four biggest abattoirs.

Asked whether the latest probe was politically motivated, Chinese Foreign Ministry spokesman Zhao Lijian said it was a “normal anti-dumping investigation” and told reporters not to “make unnecessary associations.”

"A sound and stable China-Australia relationship is in the common interests of the two countries, but it requires the joint efforts of both sides,” Zhao said.

China drinks 39% of Australia's wine exports. The United States is the second-biggest customer, accounting for 15%, followed by Britain at 13%.

Chinese Ambassador Cheng Jingye warned in a newspaper interview in April that China might boycott Australian wine if Australia persisted with its call for a COVID-19 inquiry.

Asked if the wine investigation was a political tactic, Birmingham told reporters, “That’s really a question for China.”

“I think the industry should have been expecting something from the comments from the Chinese ambassador,” Shaw said.

Relations had improved after Australia distanced itself from U.S. security concerns over popular Chinese apps TikTok and WeChat, Zhou said.

“I don’t think it’s part of the previous political fight between Australia and China” over the coronavirus, Zhou said. “There have been positive signs of political improvement of the bilateral relationship.”

Shares in Australian wine exporter Treasury Wine Estates plunged as much as 17% on the Australian market on news of the investigation.

The Melbourne-based company reported to the Australian Securities Exchange in 2018 that it was one of several Australian exporters experiencing delays in getting wine through Chinese customs.

The company said in a statement to the exchange on Tuesday that it will “cooperate with any requests that we receive for information from Chinese or Australian authorities.”

Australia signed a free trade deal in 2015 with China, its biggest export market.

Zhou said he doubted China would target Australian wine in its diplomatic dispute because Chinese investors would be hurt.

“The Chinese investors are trying to secure a production base in Australia so that they can provide sufficient supply back to the Chinese market,” Zhou said.

Penalties on wine "will hurt the Chinese investors as well,” he said.