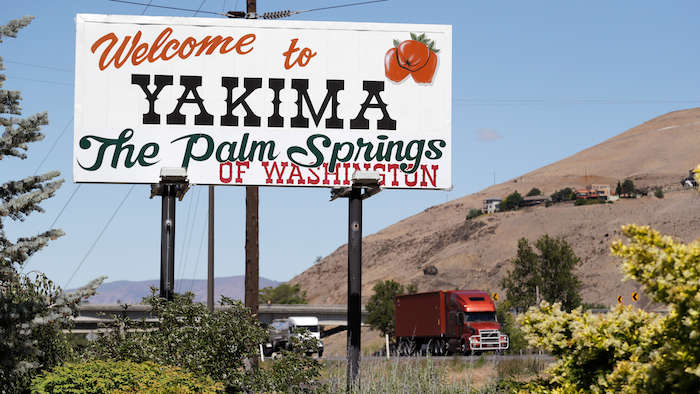 In this photo taken June 17, a sign declares off the highway in Yakima, Wash., declares the city the "Palm Springs of Washington." The coronavirus pandemic is hitting Yakima County hard, with cases surging far faster in than in the rest of the state. The virus has caused turmoil in the farm and food processing industries, where some fearful workers staged wildcat strikes recently to demand that employers provide safer working conditions.
AP Photo/Elaine Thompson

YAKIMA, Wash. (AP) — Fruit warehouse worker Armida Rivera says her days in Yakima County, Washington, are filled with the fear of getting the coronavirus.

Sean Gilbert worries about the threat to his family's century-old orchard business in the county.

And Washington Gov. Jay Inslee is struggling to help the county at the heart of the state's agricultural belt that he once called home.

The coronavirus pandemic is hitting Yakima County hard, with cases surging far faster in this region about 140 miles (225 kilometers) southeast of Seattle than the rest of the state. The virus has caused turmoil in the farm and food processing industry, where some fearful workers staged wildcat strikes recently to demand employers provide safer working conditions.

Hospitals in the county are filled to capacity and have started sending patients to neighboring counties, officials said.

Efforts to slow the spread of COVID-19 among the county's 250,000 residents have so far failed, and Yakima County is one of only three in Washington that has remained in Phase One lockdown while most of the state is starting to reopen. 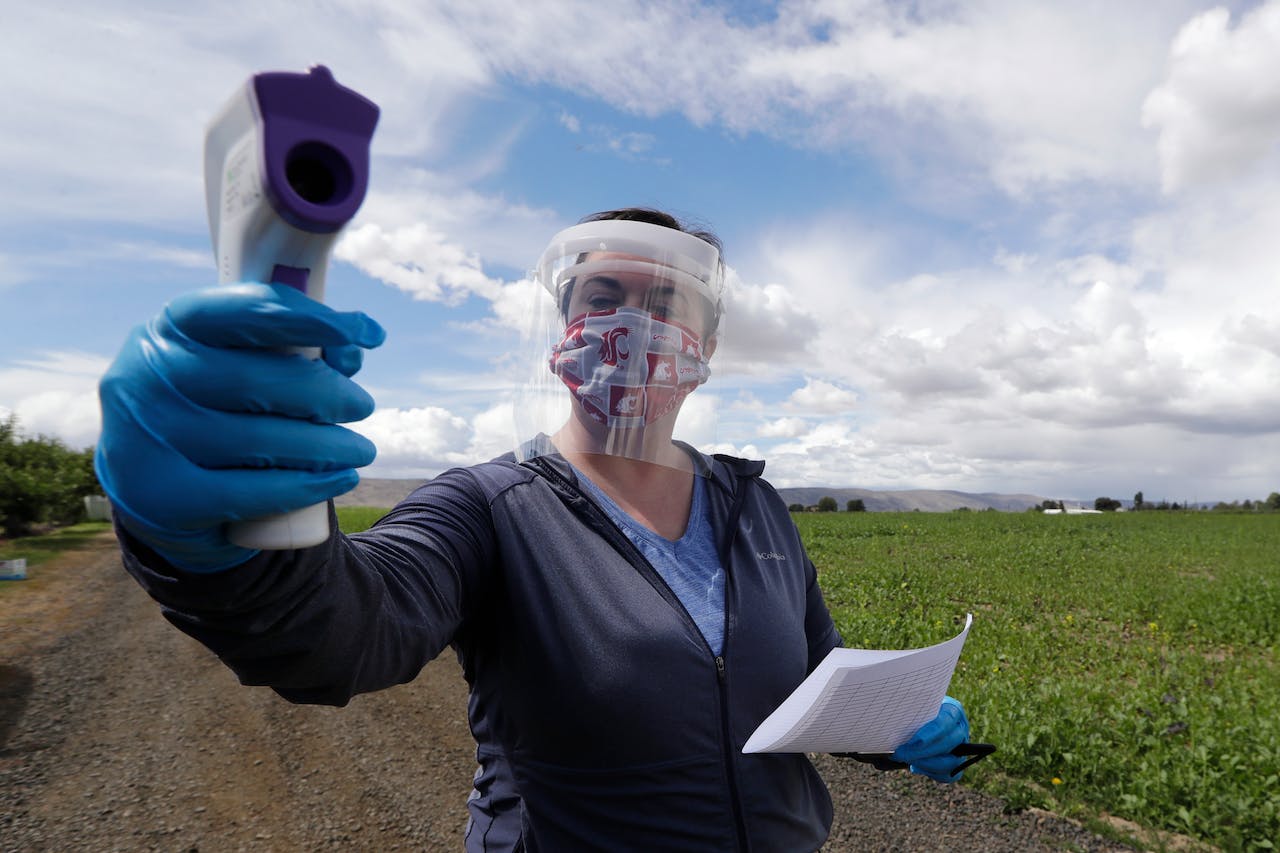 In this photo taken June 16, Gilbert Orchards safety manager Sarah Rasmussen takes the temperature of a visitor to the orchard in Yakima, Wash.AP Photo/Elaine Thompson

Inslee said a big reason is that many people in Yakima County are declining to wear masks.

Visits to fast-food restaurants and other essential businesses found lots of employees and customers not wearing masks. In Selah, youth league baseball games were being played with spectators — few wearing masks — in the stands.

Inslee on Saturday announced he was preparing a proclamation to require Yakima County residents to wear masks when outside their homes. Stores and other businesses will be banned from selling to customers without masks, he said.

“That essentially means: ‘’No mask, no service, and no mask, no goods,'' Inslee said.

The Washington Department of Health in mid-June ranked the industries in the state most struck by COVID-19. The agency found that manufacturing, including food processing plants, ranked second in cases, behind health care. Agriculture ranked fifth, behind retail trade and the hospitality industry.

Nationally, meat and poultry processing plants have been hard-hit by coronavirus, with at least 20 of those plants across the country shut down for a week or more.

Meanwhile, the 2.7 million farm workers employed in the U.S., often working and living in close quarters, are just heading into the busy harvest season.

As of Sunday, Yakima County had at least 6,283 cases of coronavirus, second-highest among counties in the state, and 138 deaths. King County, which includes Seattle and has nearly 10 times more people, had recorded at least 9,211 cases and 600 deaths.

Inslee noted the infection rate in Yakima County was 28 times higher than the rate in King County. He predicted it would jump dramatically this summer if people don't take steps to limit exposure.

“It is terrifying,'' Inslee said of the region, home to tens of thousands of workers on farms and in food processing plants who make up the bulk of the economy.

Just over 50% of the county's virus cases involve Hispanic residents, who make up the bulk of the agricultural workforce. In addition, 26% percent of virus tests in the county come back positive, compared to a state average of about 6%.

Rivera, 36, works in a fruit warehouse. A native of Mexico who has lived 20 years in the United States, she was a leader of a two-week wildcat strike at the warehouse when management refused to provide workers with masks, hand sanitizer and other safety equipment.

“We were scared. '' she said, stressing that people were working shoulder-to-shoulder. 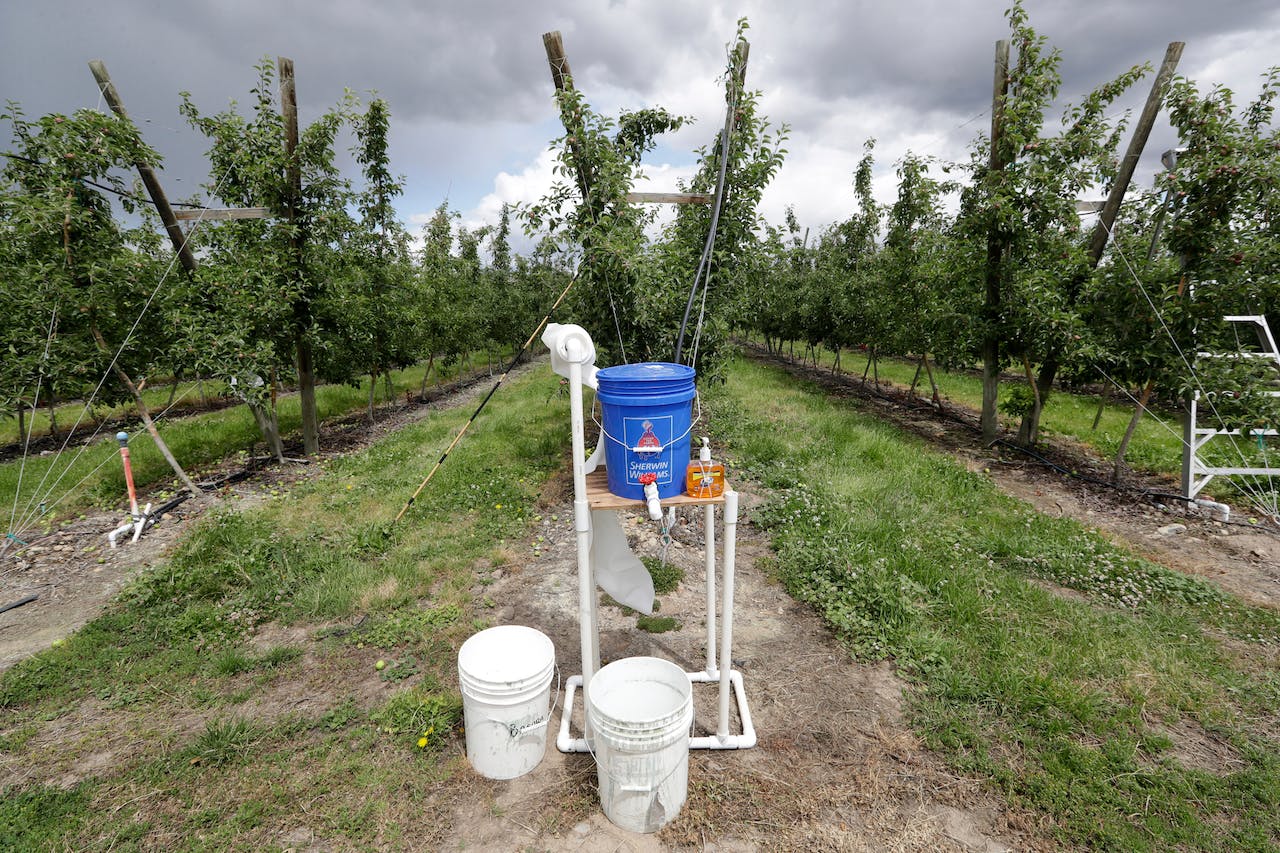 In this photo taken June 16, a wash station stands at the end of a row of apple trees in Yakima, Wash.AP Photo/Elaine Thompson

The valley's bounty of apples, cherries, pears and other crops are sorted, cleaned and packaged at the warehouse.

The workers who went on strikes at several plants mostly earn the minimum wage of $13.50 an hour. They were heartened by support from the medical community, as doctors and nurses came by to drop off masks and other supplies.

The wildcat strikes, which involved half a dozen fruit warehouses, have all been settled, but fears remain.

Rosalinda Gonzalez, 41, is a native of Mexico who has lived in the United States since 1995. Married with three children, she also went on strike for protective equipment and a safer work environment.

“We are always afraid,'' Gonzalez said, adding that many workers at her warehouse have tested positive for the virus.

Some farmers have taken extraordinary steps, some prescribed by the governor's office, to protect their work force.

Gilbert is the owner of Gilbert Orchards,where he grows 4,000 acres of apples, cherries, wine grapes and other crops in the shadow of the Cascade Range.

He provided face marks for his workforce, spending $22,000 in April to buy 16,000 masks from China. His employees practice social distancing and migrant workers are housed in dormitories that no longer include bunk beds, as required by the governor's proclamations. Vans now carry seven people at a time to distant fields instead of 15.

But that doesn't mean he will stay in business.

Costs for farmers are rising dramatically, even as the markets for produce are dropping because of trade restrictions overseas and people's inability to pay for the products in the United States because of job losses, Gilbert said.

He recently took 300 acres of apples out of production.

“At our cost structure, it didn't make sense to keep growing,'' he said.

Inslee said the county also has lots of cases in nursing homes, and a large percentage of the region's employees are rated as essential and thus continued to go to work.

“”This is the place where our food comes from,'' Inslee noted.

As a result, local politicians pushed him hard to start allowing the reopening of businesses in Yakima County.

Rivera said safeguarding health should be the most important consideration.

“It’s super necessary to protect our families.″ she said.