Hardest hit are smaller breweries that depend on supplying kegs to local taverns and events such as local festivals. 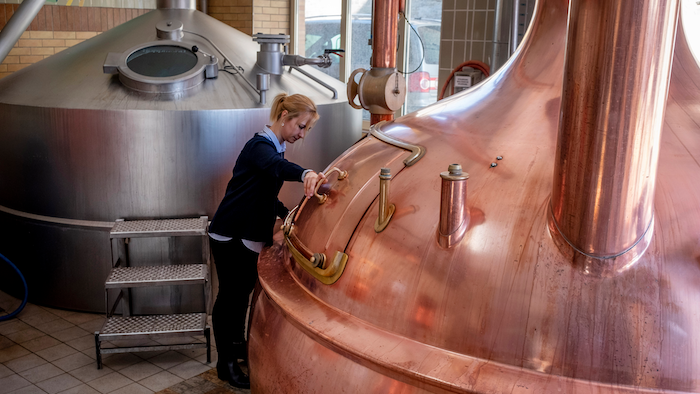 In this Friday, April 17 photo, junior director Christine Lang of the "Wernecker brewery" stands in the brewhouse of the brewery in Werneck, Germany. Due to the impact of the coronavirus the traditional brewery has to close 400 years after its foundation. (AP Photo/Michael Probst).

WERNECK, Germany (AP) — The Werneck Brewery has survived a lot: world wars, economic crises and decades of declining beer consumption. But after 400 years in existence it has finally met a challenge it can't overcome: the coronavirus outbreak.

The brewery, which traces its history to 1617 and has been owned by the same family since 1861, is closing for good, taking with it 15 full-time jobs and more part-time positions. Also gone is a chunk of local history and tradition in Werneck, a town of 10,000 people in the brewery-rich southern state of Bavaria.

German brewers fear its demise is the leading edge of more closures as the virus outbreak threatens the existence of the country's many local producers of the national beverage - community institutions, often family owned for generations, whose buildings and affiliated taverns are regional landmarks in a country where the hometown brew is often a sentimental favorite despite competition from national brands.

Hardest hit are smaller breweries that like the one in Werneck that depend on supplying kegs to local taverns and events such as local festivals. Restaurants are closed and the government says mass gatherings will not resume until Sept. 1 at the earliest — and even then it may take years before they rebound to levels seen before the virus outbreak.

Retail sales are providing some support as people drink at home. Breweries are trying things like drive-through sales and even shipping beer and glasses to customers so they can join an on-line tasting.

But for many the months without income may be more than they can handle.

Family member and brewery manager Christine Lang said the decision to close came with “many tears.” The beer market was already hard fought with tough price competition, she said. Then came the virus, and the restaurant customers the brewery depended on were suddenly closed, with no clarity on when they might open.

“No one knows how long the coronavirus will last, when there will be an improvement, and whether the restaurants will open again at all,” she said. "And in our business it's the case that a beer that isn't drunk today won't be consumed twice in a couple of months, the sales revenue is gone, lost." 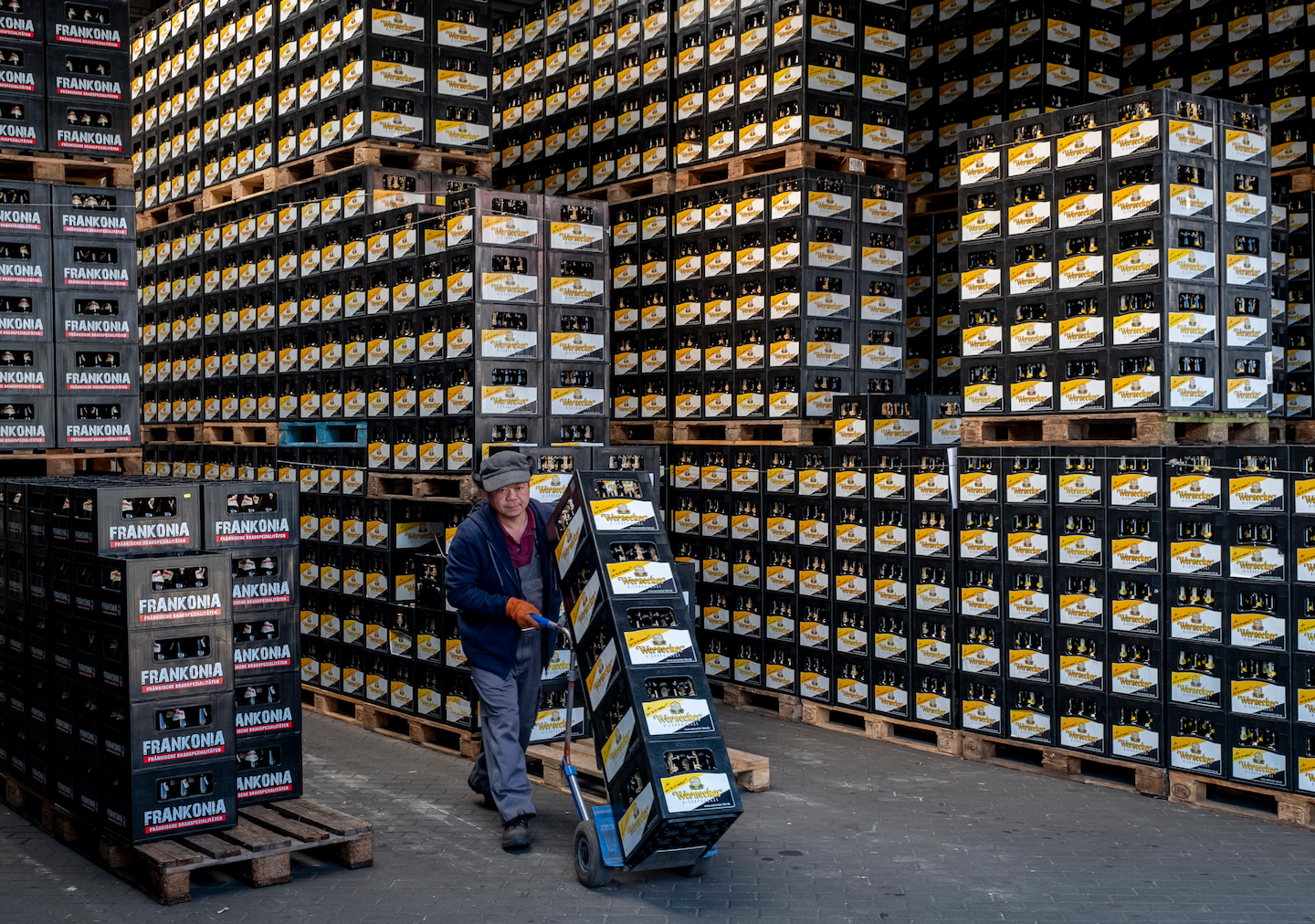 In this Friday, April 17 photo, a worker at the "Wernecker brewery" transports beer crates in Werneck, Germany.AP Photo/Michael Probst)

According to a survey by the national brewers association some 87% of breweries say they are putting workers on short hours, taking advantage of a government program that pays up to 60% of net salaries during business interruptions. The program is aimed at getting companies through a crisis, keeping workers from being laid off, and supporting consumer spending in the economy. But other programs such as credits and delays in collecting taxes are less useful, brewers say. Credits mean taking on new debt for the future, and the taxes will eventually have to be paid as well.

Holger Eichele, secretary general of the German Brewers Association, said that “many breweries will not survive this crisis, that is already becoming clear.” In addition to longtime brewers focused on restaurants, "we also have many entrepreneurs, that is, craft breweries, that are not yet profitable, that have borrowed money to finance their startup, and it's also very difficult for them."

The unexpected shock comes at a time when enthusiasm for craft beer and microbreweries has helped the industry overcome several decades of declining beer consumption. The number of brewers has grown in recent years to over 1,500, as startups introduced new products such as India pale ales into what had been a very conservative lineup based on traditional pilsners and wheat beers.

More diversified producers are better equipped to survive. Welde, a family run brewery near Heidelberg that traces its history to 1752, normally sells about a third to retail outlets, a third to wholesalers who supply events and sports clubs, and a third to restaurants.

Managing director Max Spielmann, who represents the ninth generation of Spielmanns to run Welde, estimates that 30-40% of sales will be lost in April, May and June. “If you have 85% of your sales in keg beer to restaurants, then you only have 15% of your revenue left,” he said. "The only sales channel that is doing well is retail sales in grocery stores, one can see that the consumption that normally would have taken place in restaurants has shifted to home."

He and other brewers are trying new things out of necessity. Welde offers an on-line beer tasting on Facebook. Participants can have six different beers and the appropriate glass delivered for 25 euros ($27) so they can taste along with the chat on April 23.

The Schumacher Brewery in Duesseldorf is offering drive-through service on Fridays and no-contact home delivery. The website of the Gaffel brewery in Cologne, which makes the city's trademark beer dubbed koelsch, encouraged home consumption by showing two neighbors on adjacent balconies enjoying what the company says is “the best koelsch, by a good distance," a pun on the social distancing requirements of the moment.

Says Spielmann: “All my forecasts say that we will get through it, with a black eye.” He thinks the crisis could spur people to support their local brewers, food producers, restaurants and hotels, keeping international tastes for food and drink but indulging them close to home, a prospect he called “glocal,” combining “global” and “local.”

For Lang from the Werneck Brewery, something irreplaceable has been lost.

“My family and I will miss it very much. The brewery has been ever-present, part of every dinner table conversation all our lives," she said. "We will be missing part of our identity, and in a way the region will, too.”

Farm cash receipts are forecast to decrease nearly 1 percent to $366.5 billion, the lowest in more than a decade
Jan 4th, 2021

If 2020 taught us anything, it’s that visibility and agility within the transportation network are crucial.
Dec 31st, 2020

It’s a very exciting time to own a business that deals with physical products.
Dec 23rd, 2020

The seaweed industry was able to pivot to selling more of its products via retail locations than restaurants.
Dec 21st, 2020

From farm to fork and everything in between, technology is making the world’s oldest industry one of its most advanced.
Dec 18th, 2020

Investing in modern infrastructure now will strengthen the supply chain and better position your company for future success.
Dec 18th, 2020

The Attorney General said Dean Foods is demanding that dairy farmers who directly supplied it milk to repay part of what Dean paid the farmers before it went bankrupt.
Dec 16th, 2020
Follow Us
Most Recent