Dairy farmers saw 2020 as a rebound year, but they're taking a worse hit to their balance sheets than ever in recent history. 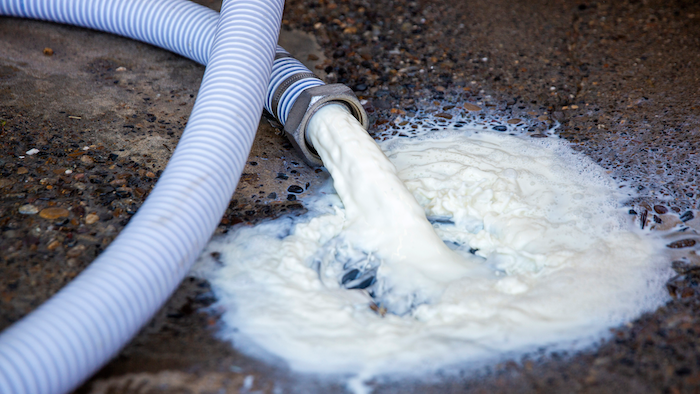 Milk pours out of the bulk tank and into the drain on Wednesday, April 8 at the Azevedo Family Dairy in Buhl, ID. With restaurants across the country closed, milk processors have lost a significant chunk of their market, leaving dairy farmers with no one to take their milk. Owner Richard Azevedo says 4,100 gallons of milk were dumped that morning. 'It's hard to watch that go down the drain,' he says.
Pat Sutphin/Times-News via AP

MARSHFIELD, Vt. (AP) — This was supposed to be rebound year for dairy farmers embattled by at least four years of depressed milk prices — and then the coronavirus hit.

Schools, restaurants, institutions and universities closed to help slow the spread of the virus, wiping out much of the food service market that makes up for a big chunk of dairy farmers' business.

Now farmers and cooperatives from Florida to Wisconsin to Maine are dumping milk because there are no plants that will take it and the price paid to farmers has collapsed again.

Plants set up to make food service products — like large packages of mozzarella cheese — aren’t able to pivot quickly and start churning out gallons of milk. Retail milk sales were up when the virus first hit as consumers bulked up on groceries but has declined since then, officials said.

“So dairy producers were really looking at 2020 to be the year they repair their balance sheets, and now they have a worse hit to their balance sheets than they ever actually experienced in those previous years,” said Alan Bjerga, a spokesman for the National Milk Producers Federation.

“We had about four or five good months there for the farmers, and this was looking to be an up year finally after about four straight years of flat and low milk prices, but it’s going to be a terrible year for milk prices here. We’re going to see milk prices down as low as we saw in 2009 after the financial crisis caused a recession,” said John Umhoefer, executive director of the Wisconsin Cheese Makers Association.

Dairy farmers expect milk prices to fluctuate, but typically they go in a three-year cycle. The last slump extended longer, with fewer people drinking milk in part because of plant-based alternatives like soy milk, turbulent export markets and too much fluid milk for the demand. Cows don’t shut off, and fluid milk is highly perishable.

In the past five years, about 5,000 dairy farms have gone out of business across the country, and the ramifications of the virus outbreak will drive more to the brink, according to Cornell University agricultural economist Andrew Novakovic.

It’s the worst the industry has seen, comparable to the Great Depression, he said.

The couple that owns Darlington Ride Farms in Darlington, Wisconsin, come from long lines of dairying families and said earlier this month that they had been disposing of 15,000 gallons of milk a day for about a week — something they've never had to resort to before.

Farmers who belong to cooperatives get paid something for dumped milk, but it greatly reduces their revenues, according to Bjerga.

To try to make do, Agri-Mark Cooperative, which gets milk from 840 farms in all six New England states and New York, has been churning out retail products since the virus hit. It has also donated food service products — such as big containers of sour cream — to food banks.

“The retail market’s been stronger but certainly not anywhere near enough to make up for the loss of 50% of the business,” said spokesman Doug DiMento. ”So we’ve been making cheese. We’ve been putting out more cheese in the last month than we ever have.”

Dairy groups and agriculture officials from some dairy-producing states have asked the U.S. Department of Agriculture to step in to support the industry and buy the additional products for emergency distribution.

It’s frustrating during a national emergency to see empty shelves or limits on milk purchases at a time when some is being dumped, said Dale Cole, who has a 90-cow dairy farm in Sidney, Maine.

“We want to sell it to people who need it,” he said. “It’s very frustrating for the farms.”

In the meantime, the unknown of how long the pandemic will last is causing added stress and anxiety.

The small Putnam Hill Farm in Newbury, Vermont, which milks 37 Jersey cows, needs to upgrade a tractor but is trying to figure out what it can afford right now.

Dairy farming, she said, has “always has been a roller coaster ride anyway, and it seems like this is a extreme ride.”