However, union leaders said they hope to avoid a work stoppage as they prepared to meet with company representatives. 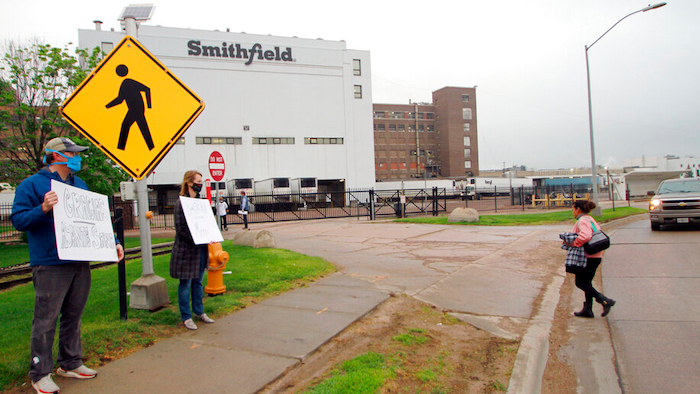 In this May 20, 2020 photo, residents cheer and hold thank you signs to greet employees of a Smithfield pork processing plant as they begin their shift in Sioux Falls, S.D.
AP Photo/Stephen Groves, File

SIOUX FALLS, S.D. (AP) — The union at a Smithfield Foods pork processing plant in South Dakota said it will head to contract negotiations Tuesday armed with the authorization to call a strike.

A strike authorization at the Sioux Falls chapter of the United Food and Commercial Workers Union was overwhelmingly approved late Monday with 98% of the vote total, the union said. However, union leaders said they hope to avoid a work stoppage as they prepared to meet with company representatives.

Meatpacking workers have become emboldened after a virus outbreak at the plant last year killed four workers and infected nearly 1,300. The union is demanding that Smithfield boost its wage offerings in a four-year contract to match those at a JBS pork plant in the region, as well as make several other concessions on break times and employee health insurance costs.

“We’re not going to change our stand,” said B.J. Motley, the president of the local union.

Smithfield Foods, which is based in Virginia, has said its initial offer, which was rejected by the union last week, is in “full alignment” with agreements that UFCW has already accepted at other plants.

A strike at the plant, which produces roughly 5% of the nation's pork supply every day, could create ripple effects from hog farmers to supermarket shelves. When the plant shuttered in April 2020 alongside others experiencing virus outbreaks, it highlighted the vulnerability of the meat supply chain. Major meatpacking companies convinced former President Donald Trump to declare them essential to national security.

Smithfield, like other large meatpacking companies, spent millions of dollars to incentivize workers and outfit plants with plexiglass safety barriers. It has pointed out that after the plant reopened, large outbreaks were avoided.

But workers at the plant have complained that they are working harder and longer amid a workforce shortage created by both the pandemic and its economic effects. They say workers have left the plant, either to work at other meatpacking plants offering better pay or for service industry jobs that have suddenly boosted wages.

Smithfield Foods did not immediately respond to a request for comment Tuesday.

Motley did not offer a deadline for when a strike could happen, but said the union would wait until Smithfield makes a final contract offer.