Indian Farmers Call for Monday Protest; 2nd in a Week

Their blockades press for the quashing of three new laws on agricultural reform that they say will drive down crop prices and devastate their earnings. 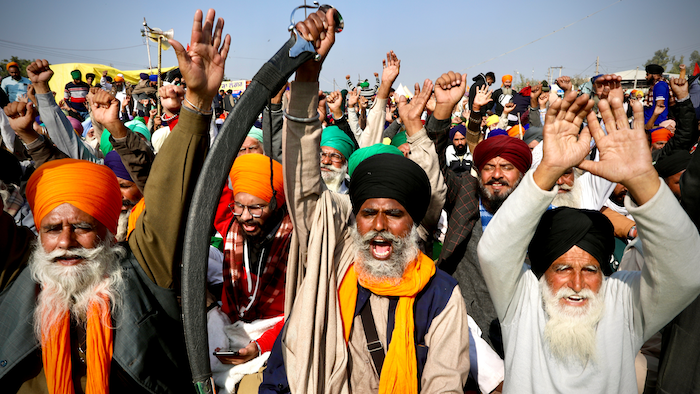 Protesting farmer leaders shout slogans as they sit on a day-long hunger strike at the Delhi- Haryana border on outskirts of New Delhi on Monday, Dec.14.
P Photo/Manish Swarup

NEW DELHI (AP) — Tens of thousands of protesting Indian farmers called for a national farmers' strike on Monday, the second in a week, to press for the quashing of three new laws on agricultural reform that they say will drive down crop prices and devastate their earnings.

The farmers are camping along at least five major highways on the outskirts of New Delhi and have said they won’t leave until the government rolls back what they call the “black laws.” They have blockaded highways leading to the capital for three weeks, and several rounds of talks with the government have failed to produce any breakthroughs.

Scores of farmer leaders also conducted a token hunger strike on Monday at the protest sites. Heavy contingents of police in riot gear patrolled the areas where the farmers have been camping.

Protest leaders have rejected the government’s offer to amend some contentious provisions of the new farm laws, which deregulate crop pricing, and have stuck to their demand for total repeal.

At Singhu, a protest site on the outskirts of New Delhi, hundreds of farmers blocked all entry and exit routes and chanted anti-government slogans. Some of them carried banners reading “No farmers, no food.”

About two dozen leaders held a daylong hunger strike at the site, while a huge communal kitchen served food for the other protesters.

“It’s the government’s responsibility to provide social benefits (to people.) And if they don’t give those, then people will have to come together" to protest, said Harvinder Kaur, a government employee who came from her home in Punjab state to help at the kitchen.

Another protester, Rajdeep Singh, a 20-year-old student who helps his farming family back home in Punjab, said the protest would continue until their demands are met.

“Now it’s their (government’s) ego and the question of our pride,” he said.

The farmers filed a petition with the Supreme Court on Friday seeking the quashing of the laws, which were passed in September. The petition was filed by the Bharatiya Kisan Union, or Indian Farmers’ Union, and its leader, Bhanu Pratap Singh, who argued that the laws were arbitrary because the government enacted them without proper consultations with stakeholders.

With nearly 60% of the Indian population depending on agriculture for their livelihoods, the growing farmer rebellion has rattled Prime Minister Narendra Modi’s administration and its allies.

Modi’s government insists the reforms will benefit farmers. It says they will allow farmers to market their produce and boost production through private investment.

Farmers have been protesting the laws for nearly two months in Punjab and Haryana states. The situation escalated three weeks ago when tens of thousands marched to New Delhi, where they clashed with police. 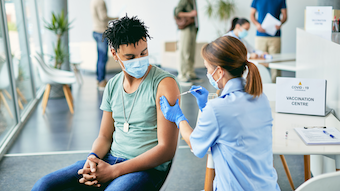