To Help Economy, Bank Proposes Tax on Working from Home

A report says white collar workers able to work from home should be taxed to help those who cannot. 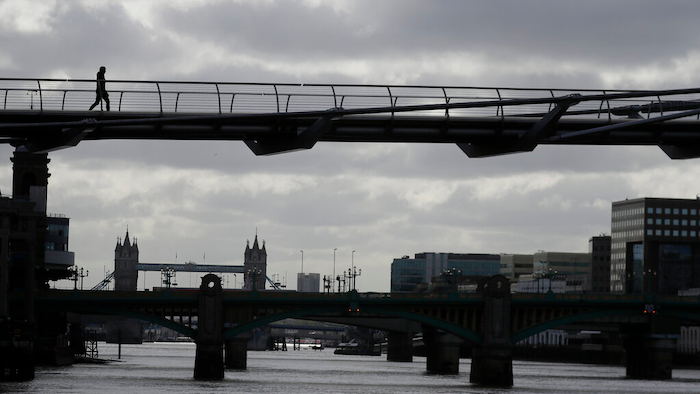 A pedestrian walks across the Millennium Bridge in London, May 11, 2020.
AP Photo/Kirsty Wigglesworth, File

LONDON (AP) — White collar staff reaping the financial benefits of working from home should be taxed to help other workers who aren't getting the same advantages, experts at Deutsche Bank said in a new report.

In its report on how to rebuild the economy after COVID-19, the bank proposed a 5% daily tax on each employee that continues to work from home, which could raise tens of billions of dollars for governments. The money could be used to help lower income workers who have taken on greater risk because their jobs can't be done remotely, it said.

The bank noted that the global pandemic has turbocharged the shift to remote work, a trend that looks set to last for the long term with many workers expecting to spend at least a few days of their work week at home even after the pandemic ends.

These workers benefit from more convenience and flexibility. They also save money directly because they don't have to pay for commuting costs, takeout lunches, or buying and dry cleaning work clothes - but it means those businesses that have grown up to support office workers won't be able to recover and “the economic malaise will be extended,” the report said.

While it doesn't make sense for the government to support, say, a downtown sandwich shop if it doesn't have any more customers from nearby office towers, “it does make sense to support the mass of people who have been suddenly displaced by forces outside their control,” the bank said. “From a personal and economic point of view, it makes sense that these people should be given a helping hand."

The tax would amount to just over $10 a day, assuming the average salary of an American working from home is $55,000. That's roughly the amount the worker might spend on commuting, lunch and laundry, which would leave them no worse off than going into the office, the report said. It could raise up to $48 billion in the U.S. Deutsche Bank carried out similar calculations for Germany and the U.K.

But the proposals faced heavy skepticism.

Andrew Hunter, co-founder of job search engine Adzuna.co.uk said the idea was misguided and predicted it would be incredibly unpopular.

“It punishes progressive companies and those with kids or caring responsibilities, who were responsible during the pandemic, who are already taking on more costs and helping the environment by staying at home," said Hunter. “Let's be honest, there are many better ways to raise taxes!”