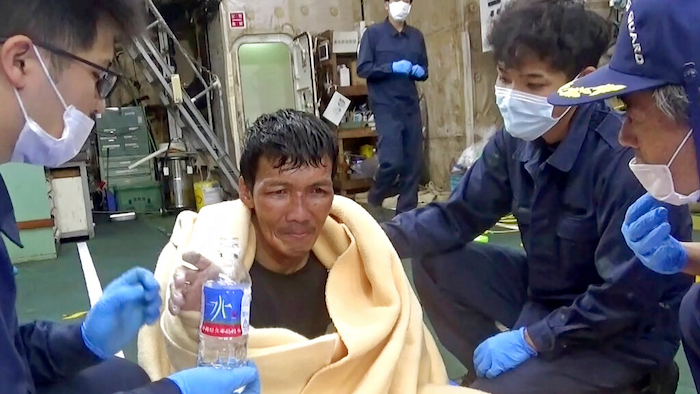 In this image made from video released by the 10th Regional Japan Coast Guard Headquarters, a rescued crew member of a Panamanian cargo ship takes a bottle of water as he speaks to Japanese Coast Guard members off the Amami Oshima, Japan Wednesday, Sept. 2, 2020. Japanese rescuers have safely plucked the crew member from the sea while searching for the cargo ship carrying more than 40 crew and thousands of cows went missing after sending a distress call off the southern Japanese island.
The 10th Regional Japan Coast Guard Headquarters via AP

TOKYO (AP) — Japan’s coast guard rescued a second survivor on Friday in waters where a ship carrying thousands of cows from New Zealand is believed to have sunk during stormy weather, officials said. Hours earlier, an unconscious crew member was also recovered but later died.

The survivor, Jay-nel Rosals, a Filipino deckhand, was wearing a life jacket and floating in a raft north of Amami Oshima island in the East China Sea, where rescuers have been searching for the Gulf Livestock 1 ship and its missing crew since it sent a distress signal early Wednesday.

Coast guard rescuers earlier Friday found an unconscious man who was floating face down about 120 kilometers (75 miles) northwest of the island. The man, whose identity was unknown, was taken to a hospital where he was later pronounced dead, said Takahiro Yamada, a spokesman for the regional coast guard headquarters.

He said rescuers also spotted dozens of cow carcasses floating in the area.

Another Filipino crew member, Chief Officer Edvardo Sareno, was rescued late Wednesday. Coast guard video showed rescuers carefully maneuvering their boat in choppy waters to pluck Sareno from the water. He told them the ship stalled when an engine stopped, then capsized after being hit broadside by a powerful wave and sank.

His wife, Catherine Sareno, a schoolteacher, said she was so worried about her husband that she prayed all night, rosary in hand, after learning the ship sank in stormy weather. “Now I feel like I don't want him to leave again,” she told ABS-CBN News.

New Zealand officials said Friday they were temporarily suspending any new approvals for the export of live cows following the incident. The Ministry for Primary Industries said in a statement it “wants to understand what happened on the sailing of the Gulf Livestock 1.”

Rescuers on Friday found traces of fuel on the surface of the sea in the area, a sign of the ship's submersion.

The total crew included 39 from the Philippines, two from New Zealand and two from Australia.

Liezyl Pitogo, the wife of one of the missing Filipino crewmen, Lindon Pitogo, told ABS-CBN News in Manila on Friday that she was “asking for help to be able to get updates and help for the rescue. It’s difficult for somebody like me for a day to pass without any news.”

The Philippine Department of Foreign Affairs said the country is coordinating with the ship owner and the Japanese coast guard. It said it remains hopeful that other Filipino crew members will soon be found.

Rescuers in four boats, an aircraft as well as divers joined Friday’s search operations. A bundle of orange rope and a life jacket carrying the ship's name were also recovered, according to a coast guard statement.

Typhoon Maysak was blowing by southern Japan at the time of the sinking. The ship's automated tracker showed it sailing in high winds of 58 knots (66 miles or 107 kilometers per hour) at its last known position, according to the ship-tracking website MarineTraffic.com.

“Our hearts go out to those onboard and their families at this time. We also express deep regret for the sad loss of the livestock on board," the ship’s operator, Dubai-based Gulf Navigation Holdings PJSC, said in a statement. “We pray that there are other survivors.”

The company, traded on the Dubai Financial Market, says it owns and operates chemical tankers, livestock vessels and other ships.

Another powerful typhoon is approaching southern Japan over the weekend.