Butter Shortage In France Amid Global Demand For Pastries

French pastries and butter have become so popular abroad that the increased demand led to a mini shortage of the dairy product in French supermarkets. 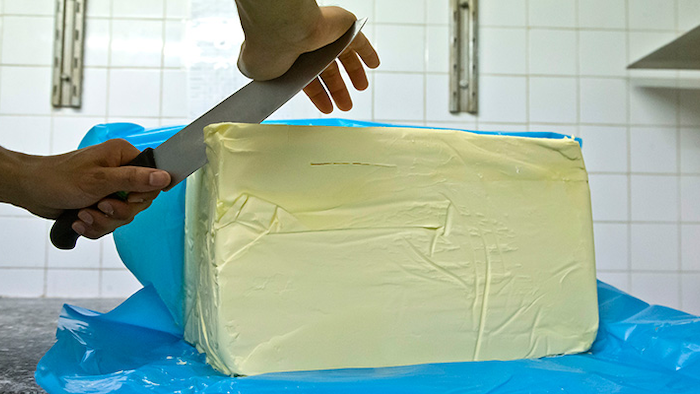 French baker Stephane Louvard puts his hand on a slice of butter in his Paris bakery, Friday, Oct.20, 2017. French pastries and butter have become so popular abroad that the increased demand led to a mini shortage of the dairy product in French supermarkets. (AP Photo/Bertrand Combaldieu)

French pastries and butter have become so popular abroad that the increased demand led to a mini shortage of the dairy product in French supermarkets.

The price of butter has risen 60 percent in a year to reach 6.7 euros ($7.9) per kilogram in August, according to official data, creating problems for pastry exporters and fears of a shortage in France of Christmas delicacies such as the traditional Yule Log dessert.

French regions like Brittany and Normandy have reportedly been hit hardest by the butter shortage, which is also linked to a drop in milk supply in Europe.

Dominique Charge, the head of the national cooperative of dairy products, told French radio RTL that butter is "more and more in demand in emerging economies like China and the Middle East."

Claude Margerin Francois, who runs a small company specialized in pastry dough in central France, told The Associated Press she has not been able to fulfill orders from Lebanon, China and Vietnam because of the shortage.

Margerin Francois, who has been buying her top-shelf labeled Poitou-Charentes butter from a local producer for 15 years, said she had to furlough eight employees because of the shortage.

She added that she could have opted for a cheaper butter made abroad but was not convinced by the quality. "Just by smelling it I could tell it was not good enough."

A new subsidiary will establish a dedicated innovation hub in Canada.
May 14th, 2021
Follow Us
Most Recent