But it's unclear how they will approach it. 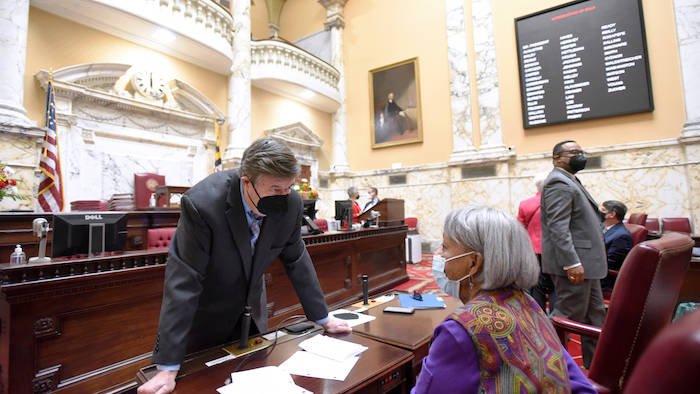 ANNAPOLIS, Md. (AP) — Maryland lawmakers gathered on Wednesday for the start of their 90-day legislative session with an unprecedented budget surplus, as they also prepared to debate high-profile issues such as the legalization of recreational marijuana and climate change.

Lawmakers will be weighing how to manage a whopping $4.6 billion budget surplus, which is the result of unexpectedly large revenues resulting in part from federal pandemic aid.

Democrats, who control the General Assembly, say they will be prioritizing upgrades to parks, bridges, schools and information technology systems to quickly help put more people back to work.

“I would like to see it be put to use to help our citizens who need it the most," House Speaker Adrienne Jones, a Baltimore County Democrat said at The Daily Record's Eye on Annapolis Summit. “This is not something that happens every session."

Gov. Larry Hogan, a Republican, has proposed what he's pitching as the largest tax-relief package in Maryland history. It would provide more than $4 billion over several years and eliminate state taxes on retirees. The plan also includes $650 million in tax relief for working families, by making permanent the enhanced earned-income tax credit that was approved last year in Maryland.

“We now can afford to do this," the governor told reporters. "That’s usually the No. 1 criticism we get from our colleagues across the aisle. They say, ‘Yeah, we’d love to help our retirees and our families and our small businesses. We just simply can’t afford to.’ Well, now we can afford to, because we’ve got the largest surplus in state history.”

Senate President Bill Ferguson, a Baltimore Democrat, said lawmakers will work with the governor and explore tax reductions, though he said moderation is needed, because so much of the surplus will only enable one-time spending.

“This is a once-in-a-100-year moment, and so we will be fiscally responsible and fiscally conservative, frankly, when it comes to the ongoing cost,” Ferguson said in a joint appearance with the speaker Wednesday morning at the Daily Record's summit.

Lawmakers will be debating whether to legalize recreational marijuana, but it's unclear how they will approach it. Jones supports putting the matter on the ballot for voters to decide in November, though Ferguson would rather see lawmakers decide the question this session, as well as how to implement it.

“I’m confident that we’ll have really robust conversations this year and land somewhere effective by the end of session," Ferguson said.

Lawmakers will again wrestle with how to do more to address climate change. Last year, a sweeping measure stalled that would have required the state to plan to increase its greenhouse gas reduction goals from 40% of 2006 levels to 60% by 2030.

Sen. Paul Pinsky, a Democrat who chairs the Senate Education, Health and Environmental Affairs Committee, said lawmakers in both chambers have signed off on two or three fundamental components, with a few more still in discussion.

“They definitely want a bill. We want a bill,” Pinsky said. "Not only is it important for the merits of addressing climate, there are political merits. I mean, there is an election, and I think legislators want to be able to run on something and people should be accountable. Do they support the environment and this kind of bold action or not?”

Legislation to create a statewide insurance program to provide 12 weeks of family and medical leave is also coming before lawmakers.

The legislative session is happening in a big election year. All 188 seats in the General Assembly will be on the ballot. Voters will be choosing a new governor, because Hogan is term limited. They also will be choosing a new attorney general to replace Brian Frosh, who is retiring, and a new comptroller, because Peter Franchot is running for governor.

Lawmakers will be finalizing new state legislative districts, a once-a-decade process that takes place after the U.S. Census. The governor and the legislature are supporting dueling proposals, but Democrats hold a supermajority in both chambers and control redistricting in the state.

The session also begins as the pandemic stretches into its third calendar year. While lawmakers are holding session in person in the Maryland State House, COVID-19 continues to force modifications to procedure and affect gatherings. Once again, virtual hearings and events are being used to limit crowds.