Talks to resolve differences over Northern Ireland trade have dragged on for almost a month. 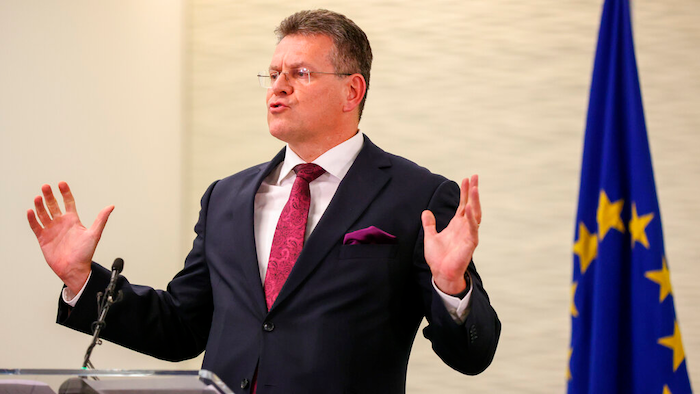 LONDON (AP) — The U.K. and the European Union inched away from a diplomatic cliff edge on Friday but remained miles apart in a post-Brexit spat that risks escalating into a cross-Channel trade war.

Talks to resolve differences over Northern Ireland trade have dragged on for almost a month, with EU officials increasingly concerned that Britain plans to suspend parts of the legally binding divorce agreement between the two sides.

That would trigger EU retaliation and could spiral into a trade war between the 27-nation bloc and its increasingly estranged former member.

The two sides’ top Brexit officials — David Frost for Britain and Maros Sefcovic for the EU — emerged from a meeting Friday in London with soothing words, but no major progress, Still, they agreed to keep talking.

“We need to make serious headway in the course of next week,” Sefcovic told reporters. The British government said Frost wanted “to bring new energy and impetus to discussions.”

Sefcovic said he welcomed a “change in tone” from Frost, who has previously threatened to trigger an emergency break clause in the deal that lets either side suspend the agreement in extreme circumstances. That would bring legal action from the EU, and potentially damaging economic sanctions.

In recent days Frost has toned down his language, saying he would not "give up on this process unless and until it is abundantly clear that nothing more can be done.”

Northern Ireland is part of the U.K. and shares a border with EU member Ireland. Under the Brexit deal it remains inside the EU’s tariff-free single market for goods, to ensure there is an open border on the island of Ireland — a key pillar of Northern Ireland’s peace process. That has created a new customs border in the Irish Sea for goods entering Northern Ireland from the rest of the U.K., even though they are part of the same country.

That has brought red tape for businesses, and has angered Northern Ireland’s British Unionists, who say the checks undermine Northern Ireland’s place in the U.K. and destabilize the delicate political balance on which peace rests. Two buses have been hijacked and set alight in Protestant Loyalist areas in recent weeks, in violence linked to tensions over the trade arrangements.

The bloc has agreed to make changes to the deal, offering to reduce checks on food, plants and animals entering Northern Ireland by as much as 80% and to cut paperwork for transport companies in half.

Britain is demanding the EU go farther and remove its top court from its role in resolving any disputes over the agreement — an idea the bloc flatly rejects.

Trust between the two sides has evaporated, with the EU accusing Britain of failing to engage with the bloc’s proposals, and the U.K. claiming the EU does not understand the delicate political and social balance in Northern Ireland.

Sefcovic said the two sides had agreed to continue talks in practical areas where they thought they could make progress, such as ensuring medicine supplies to Northern Ireland, in hopes that will inject momentum into the talks.

He said the EU was showing “a lot of flexibility and creativity” and urged the U.K. to respond in kind.

Ireland, the EU country most directly affected by a chill in relations, said it had spoken to the U.S. administration about the feud. President Joe Biden has said no side should do anything to undermine Northern Ireland’s Good Friday Accord, the 1998 deal that laid the foundations of peace.

“A tough approach, or a tough-guy approach, when it comes to Northern Ireland can only be counterproductive and will lead to disaster,” he said.

“If we can get certainty, if we can get a continuity in trading arrangements, and less of this discussion, what will happen is that the economy in Northern Ireland will prosper and that then helps as well the social situation, which is very, very delicate at the moment,” Byrne told the BBC.