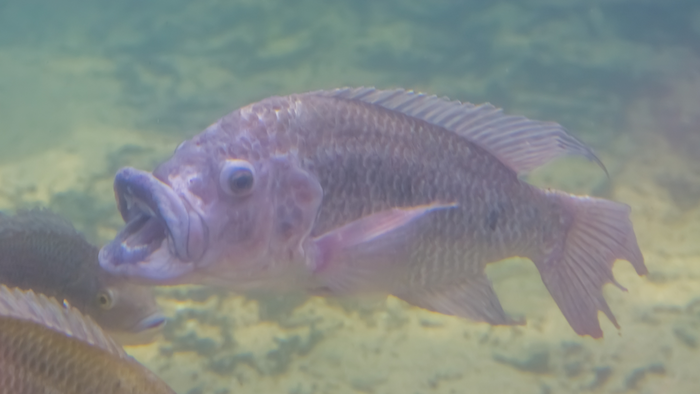 A closeup of a tilapia.
iStock

Since fish have been filtering particles for more than 150 million years longer than human beings, we suspected fish may have evolved filter designs that use unknown processes to remain unclogged. So we decided to investigate.

Our research, recently published in Nature Communications, combines approaches from biomechanics, medicine and ecology to explore how these fish retain and transport prey inside their mouths. Our goal is to provide ideas and data that could improve aquaculture, conservation and industrial filtration.

Until 15 years ago, we thought that most filter-feeding fish used oral structures called gill rakers in the same way that we use coffee filters or spaghetti strainers. These so-called dead-end sieves force water to pass straight through the pores of the mesh. But dead-end sieves always clog as particles accumulate over time to cover the filter surface.

The water flows right through a colander and leaves the spaghetti trapped on the mesh, but a fish needs to move the food from the gill raker filter to the back of its mouth for swallowing. Dead-end sieves would cause problems for fish, since their gill rakers would clog and fish don’t have a tongue to move food particles off the gill rakers. So we knew they must be using some other filtering technique.

By putting a biomedical endoscope inside the mouths of feeding fish, colleagues and I discovered in 2001 that several common fish species use crossflow filtration instead of trapping particles directly on a dead-end sieve.

A tilapia illustrating the current model of crossflow filtration, from Sanderson et al., doi: 10.1038/ncomms11092. The mainstream flow (MF) enters from the right and passes across the gill rakers (GR) that are attached to the branchial arches (BA). The mainstream flow carries concentrated particles to the back of the mouth for swallowing. The smaller secondary flows (the filtrate, Fi) pass through the pores of the gill raker filter.Virginia Greene, virginiagreeneillustration.com, CC BY-NC-ND

Through the endoscope, we could see that the main flow of water heading toward the back of the mouth was transporting concentrated particles parallel to the gill raker filter. Less forceful streams of particle-free water exited between the gill rakers. All of these fluid dynamics are caused by the interaction of the water with the physical structures in the fish’s mouth.

We hadn’t expected to see crossflow filtration in fish, though this mechanism had been independently developed by industry a few decades earlier. Crossflow filtration avoids clogging and is often used to filter wastewater, pharmaceuticals, dairy foods and beverages such as beer and fruit juices.

Unfortunately, even industrial crossflow filters still clog eventually. Over time, as water exits through the filter pores, it deposits some particles on the filter. The filters must then be backflushed or cleaned with chemicals, causing a major operating expense.

So we turned again to fish, to see whether millions of years of evolution might have come up with unique crossflow filter designs.

We started our study by examining basic structures inside fish mouths, familiar to fishermen and aquarium hobbyists. Fish gill rakers – the “feeding filters” – are attached to the branchial arches. These arches are bone or cartilage “ribs” inside the mouth that also support the bright red gills for gas exchange. The arches are typically positioned one after another from the front of the mouth back toward the esophagus, where food is swallowed. Scientists hadn’t previously considered the effects these branchial arches could have on patterns of water flow.

For our latest research, we made our own filters by using computer-aided design (CAD) software and 3D printing to create cone-shaped plastic models of fish mouths. We covered the branchial arch “ribs” with a fine nylon mesh.

We based our physical models on paddlefish and basking sharks because their branchial arches form a series of tall ribs that are separated by deep grooves. In our models, each rib served as a backward-facing step that interacted with the crossflow of water traveling over the step.

Almost anywhere that water flows over a backward-facing step, a vortex is created automatically. For this reason, the closely-spaced tall ribs (“d-type ribs”) in these fish mouths aren’t often used by engineers because of the disruptive vortices that form continuously in the grooves between the ribs.

We designed many models with different versions of these backward-facing steps to test the effects of varying characteristics like height and distance between the steps. Interestingly, designs for some microfluidics devices that are used in labs for cell sorting have similar rib-like structures.

Both paddlefish and basking sharks are ram filter feeders that swim forward with a completely open mouth to capture prey. To simulate this kind of feeding, my three undergraduate student coauthors, Erin Roberts, Jillian Lineburg and Hannah Brooks, and I conducted experiments in a flow tank. We submerged our stationary models in a constant stream of water inside the tank. The models “fed” on particles as we adjusted the speed of the water in the flow tank and added particles of different sizes, shapes and densities to the water.

A paddlefish illustrating the new vortical cross-step filtration model, from Sanderson et al., doi: 10.1038/ncomms11092. The mainstream flow (MF) enters from the right and interacts with the series of backward-facing steps that are formed by the branchial arches (BA), causing vortical flow (Vo). The vortex interacts with the gill rakers (GR) to concentrate particles for transport towards the back of the mouth to be swallowed.Virginia Greene, virginiagreeneillustration.com, CC BY-NC-ND

Like the spinning of a mini-tornado, water passed over the backward-facing steps inside our models and formed a distinct vortex in the groove between each pair of ribs. We designed accessory structures to control the movement of the vortices by creating regions of the model where the flow couldn’t escape easily. High shear rates around the vortices scoured particles off the mesh, preventing clogging. 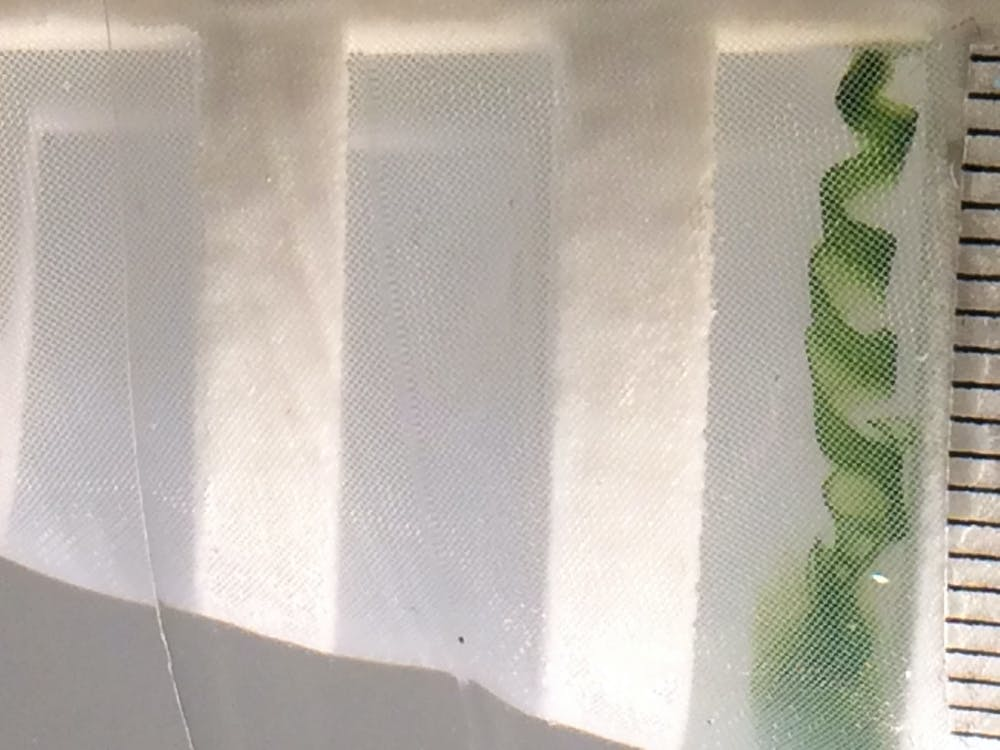 We manipulated the vortices to carry particles to the floor of the models, showing that fish could be using this highly adaptable filtration system like a “hydrodynamic tongue” to move particles inside their mouths.

Small preserved paddlefish from an aquaculture company, placed in the flow tank in filter-feeding position, also formed vortices that concentrated particles inside the mouth. This suggests that we’ve correctly identified and modeled structures that are important for generating vortices inside real fish mouths.

This new filtration method, which we term “vortical cross-step filtration,” is effective even when the mesh is damaged or missing from a large portion of the models. Just like fish can continue to feed even when their gill rakers are still growing or are torn, our models can capture particles even when there are large holes in the mesh.

Although we’d identified vortices as a potential mechanism for fish filtration as early as 2001, data on particle capture by vortical flow in fish mouths haven’t been published previously.

The future of cross-step filtration

Our biomimetic models of paddlefish and basking shark mouths use novel arrangements of engineering structures that harness vortical flow to retain and transport tiny food particles. Cross-step filtration could also apply to filter-feeding ducks, baleen whales and the gill rakers of filter-feeding fish such as manta rays.

Understanding these vortices in fish opens new research directions for engineering improved filters with less clogging, as well as the rapid separation of cells for biomedical tests.

This article is republished from The Conversation under a Creative Commons license. Read the original article here: https://theconversation.com/what-can-fish-mouths-teach-us-about-engineering-clog-free-filters-56877.