COVID anxiety is at its highest level since winter. 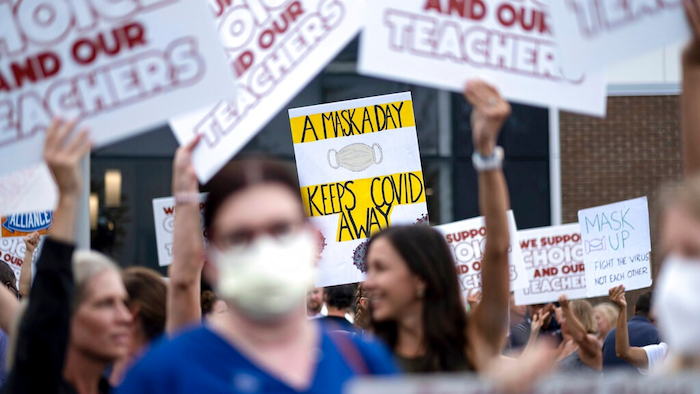 People in favor of and against a mask mandate for Cobb County schools gather and protest ahead of the school board meeting Thursday, Aug. 19, 2021, in Marietta, Ga.
Ben Gray/Atlanta Journal-Constitution via AP

DENVER — Anxiety in the United States over COVID-19 is at its highest level since winter.

The heightened worry is reflected in a new poll from The Associated Press-NORC Center for Public Affairs Research. It comes amid another nationwide spike in infections, spurred by the highly contagious delta variant.

More state governments and school districts are adopting masking and vaccination requirements and the nation’s hospital bed capacity is once again stretched to the limit.

The poll shows nearly 6 in 10 Americans want vaccination mandates for those attending movies, sports, concerts and other crowded events. They also want mandates for those traveling by airplane and for workers in hospitals, restaurants, stores and government offices.

The poll shows that 41% are “extremely” or “very” worried about themselves or their family becoming infected with the virus. That is up from 21% in June, and similar to January’s surge at 43%.

Nearly 200 million people, or just over 60% of the U.S. population, had received at least one vaccine dose, according to the CDC. Just over 50% are fully vaccinated. More than 620,000 Americans have died from the coronavirus.