Distillers see both opportunities and dangers with Britain's decision to leave the EU, and Europe's trade spat with the U.S. over new tariffs. 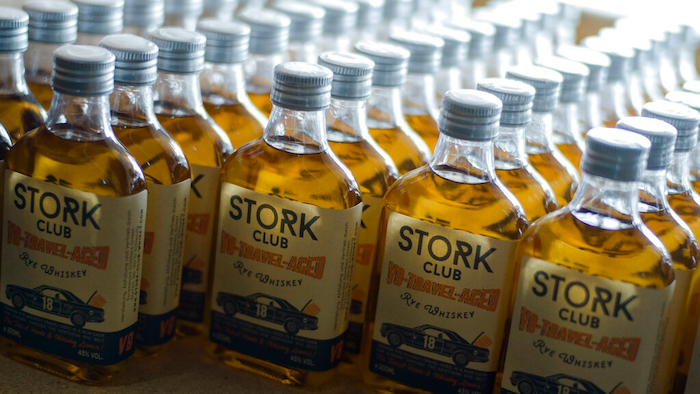 In this Thursday, Feb. 28, 2019 photo, bottles of a special edition of Stork Club rye whiskey stand in a storage room of the German whiskey maker Spreewood Distillerie in Schlepzig, Germany.
AP Photo/Markus Schreiber

SCHLEPZIG, Germany (AP) — Bastian Heuser swirls the snifter of deep amber whiskey before taking a sip, noting its sweet caramel flavor that soon opens up with hints of spices, nuts and dried fruits.

It's not a single malt from a verdant Scottish glen, nor a sour mash bourbon from the hills of Tennessee. This is an award-winning German rye whiskey produced by the tiny Spreewood Distillery , nestled in a small town among the fields and forests of Brandenburg about an hour's drive from Berlin.

German whiskey is little known outside the country, and the industry is still tiny compared with others, but isn't unaffected by major international issues, with distillers seeing both opportunities and dangers with Britain's decision to leave the European Union and Europe's trade spat with the U.S. over new tariffs.

Both issues may seem far away from the Spreewood Distillery, established in refurbished farm buildings in the town of Schlepzig, home to about 600 people, where the emphasis is on a small, craft product created from locally sourced ingredients.

"From grain to glass, we do it all here," Heuser says at the distillery he has run with his two partners since 2016. "The only thing we don't have is our own field of rye, but maybe that will come."

More and more micro operations like Spreewood have been opening up in recent years, focusing on small batches of quality whiskey. Nobody quite knows when it happened, but today distilleries producing whiskey in Germany outnumber those in Scotland, about 180 to 130.

"It's crazy how many German whiskey distilleries there are these days," German Whisky Distillers' Association president Michaela Habbel says. "Of course the fact still is that German whiskey only accounts for 0.4 percent of the world market."

In 2017, the entire German whiskey production was worth 11.6 million euros ($13.1 million) — negligible when compared with Scotch whisky exports alone that year, worth some 4.4 billion pounds ($5.8 billion).

With such a small overall production of about 6 million liters (about 1.6 million gallons) in 2017, German whiskey is mostly sold on the domestic market. But that doesn't mean that distillers like Heuser and Habbel aren't watching international politics, with whiskey featuring prominently in two major current issues — Brexit and U.S. President Donald Trump's protectionist tariffs.

With 90 percent of Scotch whisky exported, accounting for 20 percent of all British food and beverage exports, the Scotch Whisky Association is increasingly concerned about Britain's looming Brexit exit from the European Union, especially if there is no deal on future trade relations.

"Brexit represents a seismic shift for our industry and one which our members are working hard to plan and adjust for," the association says, noting that the EU is the single most valuable market for Scotch.

With duties looming for Scotch and already on bourbon, Habbel sees opportunity for German distillers.

"Maybe the consumer who has always drunk Scotch will look over to the distillery next door and turn to the German product," she says.

But if the whiskey tariffs turn into a long-term issue, Heuser says it would be to nobody's benefit.

Right now, Spreewood only exports small quantities of whiskey to Britain. But it's hoping to increase that, and is eyeing possible exports to the U.S. down the road.

"The U.K. is a very important whiskey market, especially to launch brands, because they're just very open toward it," says Heuser, who worked as a bartender in London in a previous life. "And the U.S. is a huge market, especially for whiskey."

Despite being sold mostly domestically, German whiskeys are gaining international recognition. In 2017, a single malt from Habbel's Hillock Park Distillery won double gold and was named the best whiskey in the world by the "World Spirits Award."

Hillock Park is one of the oldest German distilleries producing whiskey today. The business grew out of the distillery's production of "korn" liquor — basically moonshine — to provide the daily 200-millileter (about seven-ounce) ration for coal miners in the industrial Ruhr region.

"There used to be a really crazy korn culture in Germany years ago," she says. "And korn is nothing more than an un-aged whiskey with somewhat less alcohol."

Whiskey can be made from many different grains, and has to be aged at least three years in either oak casks that have previously been used to mature other liquor, or virgin oak casks.

Malt whiskey is made from malted barley and can only be called Scotch if produced in Scotland, according to EU regulations, and is predominantly matured in used oak casks. The German product is known as single malt. Bourbon must contain at least 51 percent corn, and rye whiskey predominantly rye grain. Both are typically aged in virgin oak barrels.

Whiskey has been growing slowly in market share as Germans move away from more traditional liquors like korn and fruit brandy, and now makes up about 10 percent of the market, according to the Association of the German Spirit Industry and Importers.

German distillers tend to focus on using the raw ingredients readily available in the area, making whiskey from rye, wheat, spelt and other grains, Habbel says.

"I don't think there's such thing as a 'German whiskey,'" she said. "The distillers are particularly proud that in Germany there is tons of diversity."

When Heuser took over Spreewood in 2016 with his partners, it was producing brandy and other liquors as well as small batches of whiskey.

"If you focus on one thing you can be really good at it," Heuser said.

Heuser says part of the distillery's appeal is its serene setting and natural approach. In addition to using grain from the nearby fields, it draws water from the river that flows through the tiny town, which attracts about 40,000 eco-tourists each year. Its brand name — Stork Club — refers to large birds that can often be seen flying overhead.

The whiskey is aged in three different types of oak barrels, which are mixed together at the end of the aging process for a unique flavor that garnered it several awards and a recent "brilliant" ranking in Jim Murray's authoritative Whisky Bible.

With 500 barrels currently aging and plans to double that this year, Spreewood is growing — but Heuser says Scotland's got nothing to worry about just yet, Brexit or no Brexit.

"We're just a little fly on the back of an elephant," he says.